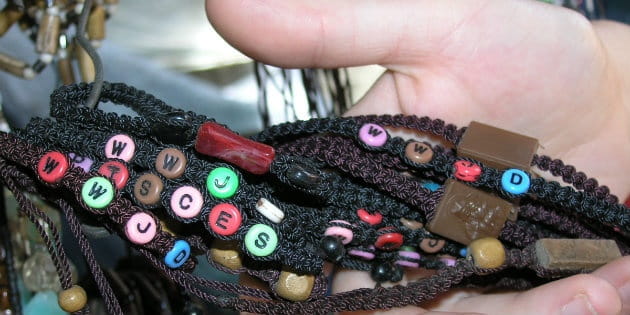 Certain icons from the 90’s will never get old, like Saved by the Bell references, neon everything, and those clear plastic landline phones…I always wanted one of those. But there are also ‘90s icons specific to the Christian community.

Sammy Rhodes, RUF Campus minister at the University of South Carolina, has written a comical article for RELEVANT Magazine titled You Know You Were a ‘90s Kid If…  He referes to it as a “fond tribute to WWJD bracelets, side hugs and kissing dating goodbye.” He shares 6 icons from the ‘90s that most Christian kids growing up in that era will remember, here are a few of those:

Those WWJD Bracelets
I was the proud owner of 2 WWJD bracelets, a purple one and a rainbow colored one. I remember the first time I wore them to school, super excited about them, one of the boys in my class said I was gay because I was wearing a rainbow. I was like, what? I just like rainbows!  But I guess those moments were supposed to be the purpose of WWJD bracelets; pause and ask yourself, what would Jesus do in this situation?

Rhodes shares, “How would Jesus have handled that PG-13 movie in front of his over youth group friends? If the answer wasn’t storming out of the theater, then you didn’t own four WWJD bracelets to match your different Tooth & Nail Record T-shirts.”

Adventures in Odyssey on Cassette Tape
Or as Rhodes’ friend calls it, “Adventures in Moralism.” This was before Radio Disney took over kids’ ears. In the ‘90s parents would play Adventures in Odyssey on the radio, or if you had a long car trip your mom either bought or checked out the tapes from the local library. Nothing makes a road trip go faster than listening to Mr. Whittaker and the gang. Although I will admit, sometimes the storyline was too frightening for me… Many kids today still listen to the radio program, and you can even visit Whit’s End Soda Shoppe in person at Focus on the Family in Colorado. It’s no Harry Potter theme park, but if you want to refresh your ‘90s child spirit it’s just the place.

Courtship vs. Dating
Joshua Harris, author of I Kissed Dating Goodbye, skyrocketed the popularity of courtship from the Andy Griffith era to current times. As a Christian teen in the ‘90s you probably either bought your own copy, were given a copy by your youth pastor or mother, or at least heard about the concept from one of your friends at youth group.

Rhodes comments, “You said things like ‘I just feel like I need to focus more on my relationship with God.’ Then you passively aggressively gave your copy to friends.”

While Harris’ version of courting was not necessarily extreme, aka parental control, he did encourage dating with a purpose. Whether you agree with the concept or not, it certainly changed the Christian dating scene and brought it to a whole new level of seriousness.

Christian Music All the Way
I have personally witnessed "Christian moshing," from the safety of the balcony, at a Jars of Clay concert in Tennessee, but I’ll let Rhodes take the lead on this one since my first concert was Bon Jovi…  He explains,

“The ’90s was to Christian music what the 2000s was to Creed and/or Nickelback: a golden age of music you would later hate yourself for (still) loving. Friday night rolled around, and instead of doing something lame, you and your friends loaded up into your church’s Ford Econoline, and stopped for some Chick-fil-A to pre-game for the Christian moshing you were about to do. If you don’t know what “Christian moshing” is, imagine a mosh pit made up of Peanuts characters.”

You can read all 6 of Rhodes’ ‘90s icons at relevantmagazine.com.

Of course, there are many other memorable Christian trends from the ‘90s that shouldn’t be forgotten like: McGee and Me and Psalty the singing songbook on VHS, getting up early for “meet me at the pole” day, crazy youth lock-ins, DC Talk, Michael W. Smith, Bible camps, church vans, Bible drills, sticker charts, sticker covered teen study Bibles, promise rings, Christian parody T-shirts such as “Abreadcrumb & Fish,” and the Three Cousins Detective Club books…OK maybe that last one was just me.

The Christian community has trends of its own, and not all of them are bad. But no matter what the Christian trend of the day is, we need to make sure that we’re focused on the one thing that never changes or comes to pass and that’s the gospel of Jesus Christ. Trends can be fun, just make sure they’re not taking up more of your time than Jesus himself.

What do you remember from the ‘90s or wish was still a trend today?