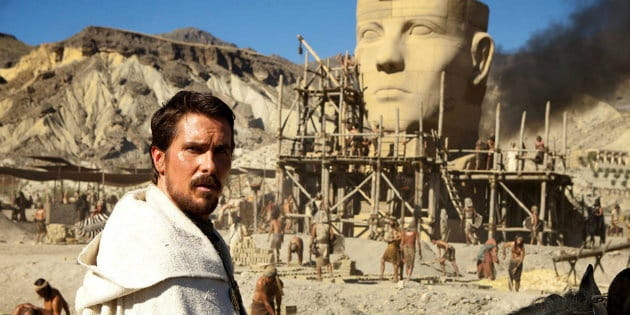 Over at Christianity Today, Drew Turner is dissecting Hollywood and ‘the year of Bible movies’ (as many have dubbed 2014) in his article Chasing the Christian Movie Audience. He wonders, what determines the success of a faith-based or biblical movie? Is it investing a small budget to make a family-friendly film that mostly Christians will see in droves? (See God’s Not Dead) Or is it to make a big-budget thriller that will attract audiences across the religious and non-religious alike, like Darren Aronofsky’s reimaging of Noah and the forthcoming Exodus: Gods and Kings?

“Christian projects can still confound expectations. The big screen Left Behind has been an embarrassing financial and critical failure, returning $11 million of a $16 million budget and scoring only a 2 percent “fresh” critics’ rating on RottenTomatoes.com.

“Ultimately (and frustratingly) it doesn't seem to matter whether you're making movies about God or a killer shark—as soon as you isolate a niche and hone a formula, audiences will prove you wrong. In the end, we're left with the words of the only person who seemed to really know how movie marketing works, screenwriter William Goldman.

‘In Hollywood,’ he said, ‘nobody knows anything.’”

Perhaps we might start by asking, Why Do Christians Seem Suspicious of the Arts? Karen Swallow Prior, professor at Liberty University, ventures an answer:

“Art is very very powerful, and the creative impulse is powerful; in a lot of ways it’s like sex. But both are gifts of God. We need to be careful with them, but we also need to cultivate them rightly…Being made in the image of God, we all have the ability to create.”

On serving God and being faithful to an artistic calling, she admits,

“It’s a difficult tension to navigate, and I think the church needs to cultivate a great awareness of how to do that. It is not going against God to pursue creative callings and to appreciate art and literature.”

Storytellers and story-hearers alike struggle with this tension. Sometimes it’s tempting for Christian audiences to go easy on Christian films if the message is uplifting and the film free from mature or questionable content.

Crosswalk.com’s review of God’s Not Dead deals with this common scenario, asking,

“[I]s it really worth it? Is this pat-on-the-back type of inspiration worth the inevitable dismissal by non-Christians for its cheesy script and manufactured plot? Is it a ‘necessary evil’ to support such lackluster films for the cause of Christ? Do the noble ends justify the means to get there?’

Crosswalk film critic Christian Hamaker explains in his review for Left Behind,

“The job of the critic is to point out what elements in a movie—any kind of movie—work well and which don't, helping readers to determine which stories are worth their time and money. In the case of Christian film production companies, which haven't been refining their craft as long as the major studios have, constructive criticism is, at its best, a help in pointing out areas where those studios' products can be improved. It does no one any favors—not the audience, and certainly not the makers of sub-par movies—to cheerlead for movies that don't deliver.”

Another factor to consider, aside from the bible-based films and the Christian-produced films, are gems such as The Good Lie and Calvary (both garnering very high critical acclaim) which present important messages of faith, religion, and morality, without being explicitly created by Christians or drawn from biblical stories. Can we as Christians watch and appreciate such films that wrestle with themes of family, war, righteousness, abuse, and even the failings of the church, without demanding that the film end with the Sinner’s Prayer and a bow on top?

What do you think of this year’s Christian and biblical movies so far? What has been your favorite –or least favorite– production of 2014? Share your thoughts below, and make sure to check out Crosswalk’s Movie channel for reviews, commentary, cautions, and more.