Is it Right for Christians to Defend Their Rights?

Is it Right for Christians to Defend Their Rights? 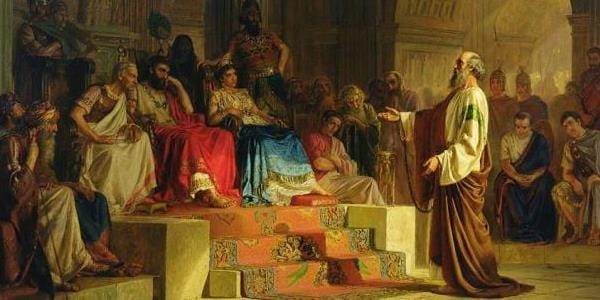 “While we certainly must turn the other cheek, go the extra mile, and love our enemies when faced with personal offenses (Matt. 5:38-48), we must not assume that defending ourselves—strenuously and sometimes even defiantly—before the governing authorities is inconsistent with being a follower of Jesus or antithetical to the propagation of the gospel.”
– Kevin DeYoung, “Is It Wrong for Christians to Defend Their Rights?”

“The times, they are a changing,” Bob Dylan sang nearly 50 years ago. But where the times have ended up is that pastors in Houston are now being subpoenaed to surrender their sermons to the mayor’s office and wedding chapels are forced to conduct same-sex services under legal threat.

In light of the changing times, Kevin DeYoung at The Gospel Coalition calls upon Christians to embrace the Apostle Paul’s approach to using the courts in his day to demonstrate and defend the social good of following Christ. Regardless of whether our defense effectively prevails, we should seize every opportunity to proclaim the gospel.

Based in the book of Acts, here are 4 points about Paul’s defense that DeYoung calls us to consider (summaries & quotes included after each point):

1. Paul had reason to give a defense. – Much of the opposition to Paul was due to slander and misinformation. People were ready to believe the worst about Paul (or ready to make up the worst about him). Paul saw no problem with taking advantage of opportunities to clear up wrong ideas held by others.

2. Paul was eager to give a defense. – While it’s true that no one should, or even can, defend himself against every opponent, every injustice, or every hurt, “every” is not the same as none.

3. Paul’s defense was often ineffective. – Yes, he had truth on his side, but truth doesn’t always win out in a court of law, let alone in mob rule. This should be acknowledged in advance.

4. Paul used his defense as an opportunity to preach Christ. – Time after time, when put on trial, Paul found a way to talk about the resurrection of Christ, about faith and repentance.

Paul was willing for his life to be cut short if the work of the gospel could go on. But so long as the gospel itself was maligned, misrepresented, and unfairly marginalized, he wasn’t about to submit himself to slander or surrender a single civic right. He would keep preaching the Christian gospel. He would keep on defending the religious and legal legitimacy of the Christian faith. And he would not believe for a moment that the two tasks were aimed at different ends.

Related to this topic, pastor Eric Redmond addresses the timely question on the minds of many in this short video: "Should Christians be invovled in politics?"

Your turn: Are you and your church prepared to defend your rights as a way to proclaim the gospel? Join the discussion in the comments below.


Alex Crain is the editor of Christianity.com