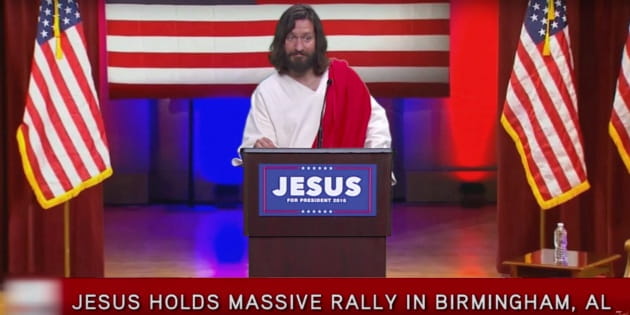 There’s a lot of talk around faith and the Bible during the election season, sprinkled in and around the debates and discussions over the issues at hand. Even though church and state are separate in theory, there are still many areas where they overlap, both to the praise and the outrage of Americans.

Recently, Jimmy Kimmel brought “Jesus” on his show to read actual quotes from presidential candidates. The candidates weren’t mentioned by name, but many can be assumed by the nature of the quotes.

Relevant shared the video, saying “many Christians will find the show’s irreverent description of Jesus offensive. But the truly interesting part is that the segment ends up being less funny and more of an indictment of the current political climate.”

This election season has seemed to be more dramatic than in years past, perhaps due to the popularity (or infamy) of several key players due to their family names or former positions. What this video does, in my opinion, is use humor as a way of shifting our perspectives from the drama and debates and polls to instead thinking about the candidates through the lens of our faith.

When you hear these quotes read from a man dressed as the stereotypical storybook Jesus, it makes you stop and think.

When you hear this “Jesus” saying, “the fact is that we need appropriate vetting and I don’t think that orphans under 5 should be admitted into the United States at this point” or “the other thing is, with the terrorists, you have to take out their families,” it’s shocking. We know based on the Bible that Jesus would not say those things.

Scripture instead says things like, “Religion that God our Father accepts as pure and faultless is this: to look after orphans and widows in their distress and to keep oneself from being polluted by the world.” (James 1:27) The Old Testament says “you shall not murder” (Exodus 20:13) and the New Testament says “Love your enemies, do good to those who hate you” (Luke 6:27).

We can clearly see the disconnect here. While the candidates are trying to communicate their faith to appeal to the voting Christians in our country, their words aren’t lining up with what the Bible says. It can be easy to ignore, but when we see segments like this, although meant to be funny, the message is loud and it’s clearly one that doesn’t align with what Jesus and the Bible say.

Maybe the humor of late-night television is more poignant and thought-provoking for Christians than we might have thought. Maybe segments like this one, although satirical in nature, are communicating serious concerns about how our faith and our politics intersect.

Crosswalk.com editor Ryan Duncan shared another example of how late-night TV brought faith to the forefront: “For Zach Hoag of A Deeper Story, watching The Tonight Show has become a new spiritual discipline. In Hoag’s eyes, many Christians have forgotten what it’s like to experience true, authentic joy. Instead, we have replaced the idea with a muted self-denial that ignores our problems. Jimmy Fallon, with his jokes, creative sketches, and optimistic laughter, reminds Hoag that the “joy of the Lord” is something far more powerful.”

Another Crosswalk.com editor, Carrie Dedrick, shared in light of the terrorist attacks in Colorado Springs and San Bernardino how “Stephen Colbert defended the offering of thoughts and prayers, explaining, ‘The reason you keep people in your thoughts and prayers is admittedly not to fix the problem, but to find some small way to share the burden of grief.’”

These television hosts, although not preachers, pastors, or spiritual leaders, are prompting us both in humor and in sentimental statements to engage with our culture in the light of our faith, and I, for one, am grateful for the reminder.