Hit From My Blind Side

Hit From My Blind Side

Thanksgiving this year was spectacular. Great food. Football. And then a football movie. Sweet! 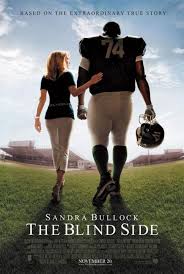 To be fair, The Blind Side is much more than a football movie. It is the true story of Michael Oher. Michael was taken from his mother and bounced from place to place in one of the most dangerous neighborhoods in Memphis. A white couple (Sean and Leigh Anne Tuohy) take Oher in and rest of the story is a heartwarming journey that examines the power of love, affirmation and stability. Oher was a first round pick by the Baltimore Ravens in the 2009 NFL Draft.

I loved the movie. I highly recommend seeing it and please don't wait for the DVD. I urge you to get out and support this movie because it  portrays Christians and family values in a positive light. In the words of Mel Allen, "How about that!".  I was hit from my blind side by an interview that Sandra Bullock did with World Magazine. Here is an excerpt from the piece written by Megan Basham.

Sandra Bullock, who, while getting to know the Tuohys during the filming process, found her own preconceived notions about Christians challenged. "One of my biggest issues has always been people who use their faith and their religion as a banner but don't do the right things, yet still go, 'I'm a good Christian and I go to church and this is the way you should live your life,'" said Bullock. "And I'm like, you know, do not give me a lecture about how to live my life when you go to church every week but I know you are still sneaking around on your wife. And I told Leigh Anne in a live interview, one of my largest concerns getting involved with this project was that whole banner-waving thing because it scares me, and I've had experiences that haven't been great with people like that. I don't buy a lot of people who use that banner as their shield. But she was so open and honest and forthright with me I thought, wow, I've finally met someone who practices but doesn't preach."

Bullock's next comment suggested that the Tuohy's newfound fame has provided them fresh opportunities to impact others with the hope that they have. "I now have faith in those who say they represent a faith," Bullock commented. "I finally met people who walk the walk."

Michael Oher was not there to protect my blind side on that last comment. "I finally met people who walk the walk." Wow. As a Christian I have spent many hours reading books on apologetics and there is nothing wrong with that. I want to be able to defend my faith. But I wonder if we don't get a little too intellectual and bowed up to "defend" our beliefs at times? (Note to cyber spiritual hall monitors: I know that is also important.) As I have thought about the comments of Sandra Bullock this week I tried to focus on the times when God was able to somehow use me in the lives of others. I do not have one example of my brilliant intellect overpowering a skeptic and bringing him to life-changing faith. Actually I don't have any examples of my brilliant intellect but I digress. I do have lots of examples where I just walked with people through trials and valleys and God used me in their lives.

I often quote my friend John Weber who is now with his Lord in Heaven. He said these very wise words.

"God didn't call us to be spectacular. He called us to be faithful".

When I am simply trusting God and being faithful I have a ministry in the lives of others. Go figure.

The story of the Good Samaritan is appropriate for this movie and this season. A religious scholar was trying to "catch" Jesus with a tough question about loving our neighbor as yourself.

"And just how would you define 'neighbor'?" Jesus answered by telling a story. "There was once a man traveling from Jerusalem to Jericho. On the way he was attacked by robbers. They took his clothes, beat him up, and went off leaving him half-dead. Luckily, a priest was on his way down the same road, but when he saw him he angled across to the other side. Then a Levite religious man showed up; he also avoided the injured man. "A Samaritan traveling the road came on him. When he saw the man's condition, his heart went out to him. He gave him first aid, disinfecting and bandaging his wounds. Then he lifted him onto his donkey, led him to an inn, and made him comfortable. In the morning he took out two silver coins and gave them to the innkeeper, saying, 'Take good care of him. If it costs any more, put it on my bill—I'll pay you on my way back.' "What do you think? Which of the three became a neighbor to the man attacked by robbers?" "The one who treated him kindly," the religion scholar responded.

It was the lowly and humble Samaritan that did the right thing even when it likely wasn't convenient. It is easy for unbelievers to dismiss the hypocrite. No problem to ignore the angry and judgmental religious types. But I remember being troubled when I saw some Christians who displayed something different in their lives. I could not dismiss so readily the joy, peace, strength, courage and love that they modeled. They were "troublesome" Christians to me.  I could not ignore them because their lives were authentic and different (different good, not weird). I want to be that kind of Christian.

Leigh Anne Tuohy is that kind of Christian. People are watching. We just need to be faithful.