Postcards from God Get Delivered in the Most Unusual Places

Postcards from God Get Delivered in the Most Unusual Places

What if we are stubbing our toes on the sacred every day and not realizing it?

That is one of the taglines promoting my book Waking Up Slowly. The book proclaims that we are the most connected culture in history but arguably the most disconnected from the awareness of God’s presence. I examine twenty-one different attitudes and actions that cause me to miss the sacred moments that I believe can be found in every day.

But like the believers of the early church at Galatia I have an amazing ability to forget what I have learned (and written). Paul could have addressed this to me in recent weeks.

You were running the race so well. Who has held you back from following the truth? It certainly isn’t God, for He is the one who called you to freedom. (Galatians 5:7-8, NLT)

I run along smoothly for a day. Sometimes two. Then I forget who I am. Not my actual name. I generally can recall that. I forget who I am in Christ. I forget that God has my back and my future. I fret about nothing. The answer to Paul’s question about who has held me back from the truth is simple and convicting. That would be me.

And then I get a postcard from God in the most unexpected way.

During our annual beach trip to Gulf Shores, Alabama I was wading in the Gulf with daughter-in-law Holly and almost two-year-old Madeline. Nestled in her Mom’s arms she giggled when the waves crashed around her. Suddenly we heard this frightening bombshell from Madeline.

Her beloved pacifier had fallen into the Gulf. Parents and Grandparents know this moment of abject panic and Madeline was predictably unhappy. I began frantically searching for it but Holly assured me there was a backup and a backup to the backup at the house.

I decided to go to edge of the surf anyway and see if it might wash ashore. Nothing. A few minutes went by and I gave up the search. I walked a few yards down the beach and explained the story to our neighbors.

“If you happen to see a pacifier wash up on the beach you can be the hero of the week! We are in the yellow house over there.”

They laughed and we chatted a bit more. I started to leave with this line.

“If Jonah’s whale spits up the pacifier let us know.”

As I turned to rejoin the family I looked down. To my sheer amazement I saw  this incredible sight two feet from my two feet. 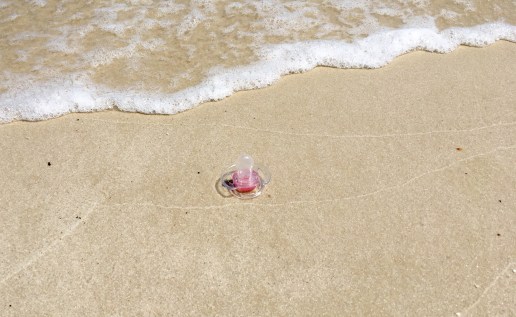 I am not proud of my reaction.

“I think that is her pacifier,” I said knowingly as if pacifiers routinely roll in with the tide and I had to double check to make sure this one was hers. The couple was amazed. A young man in his twenties had been listening to the exchange and he responded with the most honesty.

What are the odds of a pacifier depositing itself two feet from me on the beach several minutes after it went in the drink? By the way, the current was very strong that day. I know it is possible. I know that some will write it off to coincidence. I am choosing to believe that a loving Father decided to have some fun with His child. The God who created the Heavens and earth can no doubt direct a little piece of plastic to a predestined destination. I don’t mean to compare my little water miracle to the deliverance of the children of Israel but I can proclaim His greatness.

“Who is like you among the gods, O Lord—
glorious in holiness,
awesome in splendor,
performing great wonders?  (Exodus 15, NLT)

You should have seen the look on Holly’s face when I returned with the treasure. Even better was the joy on Madeline’s countenance. She may not get the theology yet but she sure understands gratitude.

Call it luck if you wish. I call it something else. A postcard from God.

Join me on a journey to become more connected to God and one another.