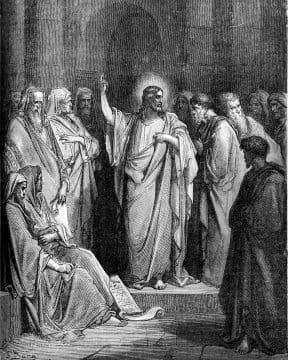 “I will raise up for them a prophet like you from among their brothers" (Deuteronomy 18:18).

In Deuteronomy 18 God promises through Moses to raise a line of godly prophets in Israel. That line would culminate in one person who would be the “prophet like me” of verse 15: “The Lord your God will raise up for you a prophet like me from among your own brothers. You must listen to him.” Verse 18 gives us the same promise in the Lord’s own words: “I will raise up for them a prophet like you from among their brothers; I will put my words in his mouth, and he will tell them everything I command him.”

1. He is raised up by God (meaning that he has a divine calling).
2. He will be like Moses (thus having intimate knowledge of God).
3. He will be from among the people (an Israelite).
4. He will speak with divine authority (as a result of the preceding factors).

Who could this prophet be?

In Acts 3 Peter heals a crippled man in the name of Jesus. When a crowd gathers in amazement to watch the formerly-crippled man walk under his own power, Peter preaches a powerful evangelistic sermon. He tells them that this miracle had been done by the power of Jesus–the same man who had been crucified just a few weeks earlier. As part of his proof that Jesus is the promised Messiah, Peter quotes Deuteronomy 18:15 and applies it directly to Jesus (Acts 3:22).

Because Jesus is the True Prophet of God, he understands the secrets of the human heart. Nothing is hidden from him. Though men cover their sin with a thin veneer of religiosity, it doesn’t fool Christ for a second. He sees through the sham, exposes the sin, and calls it what it really is.

He knows the truth and he declares the truth, even when his words are sure to offend his hearers.

When a prophet speaks, you have only two choices:

Listen to what he says.
Disregard his words.

There are no other options. If you say, “I’m going to think about it,” that’s really the same as disregarding him.

If Jesus is the True Prophet of God, then you must either receive or reject his words. You have to make a choice. There can be no neutrality about Jesus. You are either with him or against him. You either follow him or you ignore him.

What is your verdict about Jesus? Is he really the Son of God? If he is, then crown him King of your life and join the millions who worship him as Savior and Lord.

Lord Jesus, may we not waver in our devotion to you, the great Prophet sent from heaven. Grant us believing hearts that we might follow you gladly. Amen.