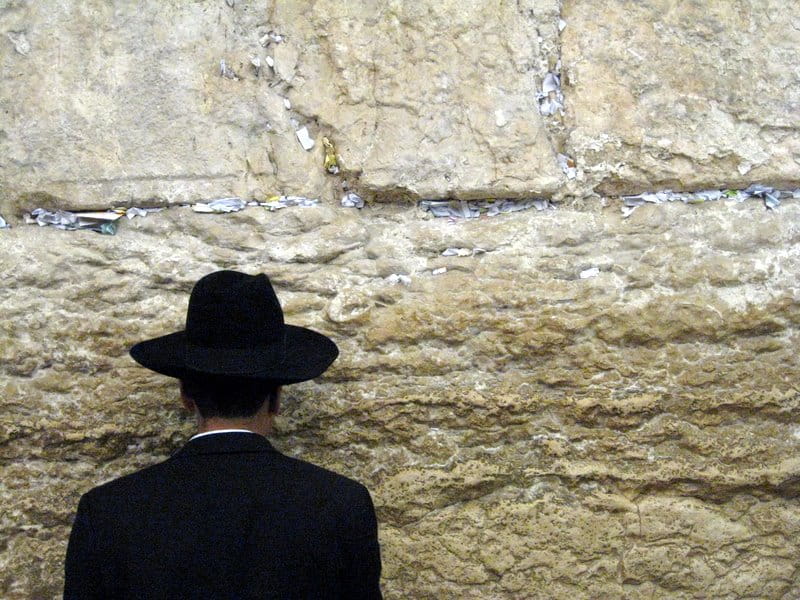 An observant Jew praying at the Western Wall of the Temple Mount in Jerusalem.

“When the time of their purification according to the Law of Moses had been completed, Joseph and Mary took him to Jerusalem to present him to the Lord" (Luke 2:22).

We would say today that he was raised in an Orthodox Jewish household. We know this because Joseph and Mary took Jesus to the Temple in Jerusalem to present him to the Lord. Even though they were poor, they still kept the law by offering two doves as a sacrifice (Luke 2:24).

Years later Jesus himself would say, “Do not think that I have come to abolish the Law or the Prophets; I have not come to abolish them but to fulfill them" (Matthew 5:17). It was absolutely necessary that our Lord be 100% obedient to all of God’s commands. And the first of those commands was circumcision (Luke 2:21). The second was the presentation to the Lord (Luke 2:22-24). This was a way of saying to the world, “O Lord, this child belongs to you, and we his parents covenant to bring him up according to the Law of Moses.”

Jesus was born a Jew and lived his whole life among the Jewish people. Remember the very first verse of the New Testament: “A record of the genealogy of Jesus Christ the son of David, the son of Abraham" (Matthew 1:1). Jesus was the ultimate “son of Abraham.”

As an observant Jew, Jesus knew all about the sacrificial system, and about the priesthood that sustained those sacrifices. In the great plan of God, he must keep the law down to the last detail, living under its demands, fulfilling in himself the true meaning of both the priesthood and the sacrifices. As the great high priest, he opened a way into the very presence of God. As the great sacrifice for sin, he made atonement for our sins, paying the price in his own blood.

But none of it would have been possible if Jesus had not lived “under the law.”

Because of his righteous obedience to God’s commands, Christ is now “the end of the law” (Romans 10:4) to everyone who believes in him.

A gospel song by Philip Bliss captures this truth:

Free from the law—oh, happy condition!
Jesus hath bled, and there is remission;
Cursed by the law and bruised by the fall,
Christ hath redeemed us once for all.

Lord Jesus, by your obedience to the law you have freed us from the law. Now we are free at last. Glory to your name forever! Amen.