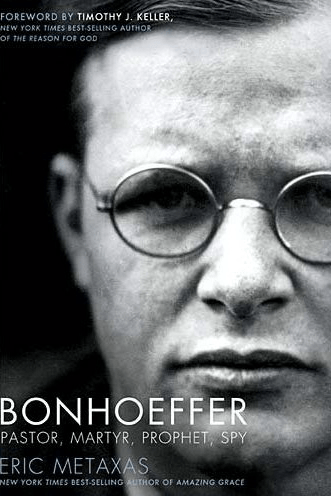 by Eric Metaxas. My short review would be that this goes on the top shelf as the best book I’ve read this year.

Two things struck me and stayed with me after I finished the book. First, Bonhoeffer saw much earlier than many others the evil that was in Adolph Hitler. Bonhoeffer saw it. He saw it when others didn’t. That vision led him away from the “German Christian” movement that made peace with the Nazis. It led him to take his stand with the “Confessing Church” that would not compromise with Hitler and his minions. Some of Bonhoeffer’s friends couldn’t or wouldn’t see what he saw. For some the price of seeing was too great.

Second, I was struck again and again by Bonhoeffer’s emphasis that to be a follower of Christ means acting responsibly even when you cannot predict the outcome. The Christian cannot retreat from the struggles of the world. His faith must lead to action even when he cannot see what comes next. When Bonhoeffer returned from the USA to Germany in 1939, he saw it as an act of obedience to God. His place was in Germany with his own people even if that meant suffering and death for him.

Bonhoeffer’s life has become so iconic that sometimes it seems that he exists only as a source for sermon illustrations. But the words “When Christ calls a man, he bids him come and die” were no mere slogan to him. He paid the ultimate price for his faith when he was executed by hanging on April 9, 1945, just a few days before the end of World War II.

We could use a few more Bonhoeffers today. To that end I hope that many people will read this fine book