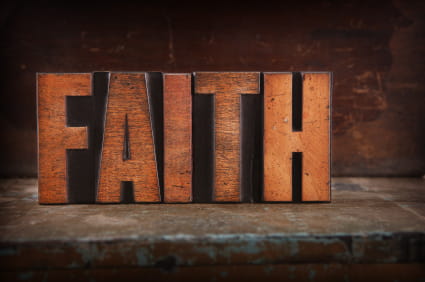 Marlene and I were having dinner with some close friends who are also supporters of our ministry. At one point during a delightful evening, the husband looked at me and said, “What you are doing is counterintuitive.” The dictionary defines counterintuitive as being “contrary to what common sense would suggest.” As I thought about it later, I realized my friend was actually stating a profound biblical truth.

Living by faith will always involve some things that are “contrary to what common sense would suggest.”

You could say that every biblical hero did things that were counterintuitive, that is, they didn’t fit into the conventional wisdom of the times. And it doesn’t always involve the miraculous. Simple obedience to God is often “contrary to what common sense would suggest.” By definition faith “makes us sure of what we hope for and gives us proof of what we cannot see” (Hebrews 11:1 CEV). Later on in Hebrews 11 we are told that Moses persevered because “he saw him who is invisible” (v. 27 NIV). That’s one of the most remarkable and revealing statements in the entire Bible. It appears to be an impossibility. How do you “see” an invisible person? If you can be seen, you are not invisible. But God was invisible and yet Moses “saw” him. How? “By faith.” Moses had faith and his faith gave him sight. That’s the ultimate counterintuitive statement. Faith sees what is really there even though others see nothing at all. Faith believes what is true even though others don’t believe it at all. By faith we see reality, which means we see beyond the world around us. But that concept should not seem strange at all. After all, the most beloved hymn in the world (“Amazing Grace”) contains this line, “I once was lost but now am found, was blind but now I see.”

My favorite definition of faith comes from Philip Yancey who said, “Faith means believing in advance what will only make sense in reverse.” So many things in this life make no sense to us. We all have very deep and personal questions that defy human answers. We want to know why things happen the way they do and why couldn’t things have happened some other way. It would be wrong to say that faith provides all the answers. It doesn’t. Perhaps in heaven we will fully understand or perhaps our desire to know will be transformed by our vision of the Lord. By faith we see things that are invisible to others and by faith we believe in advance those things that right now make no sense but one day will make perfect sense because we will view them in reverse.

The world says, “Seeing is believing.” God says, “Believing is seeing.” We believe, therefore we see.

What my friend said is true in some respects at least. What we are doing right now is counterintuitive. It is contrary to what common sense would suggest. But the life of faith is always counterintuitive. By faith the children of God move forward, sometimes doing things that make no sense to others. It worked out pretty well for Moses and David and Joshua and even for the three Hebrew children. We have our trials and sometimes our doubts but having seen him who is invisible, we do not live by the conventional wisdom of the world. For those who live by faith, everything will make sense in the end. If God is God, that must be true.

If everything in your life can be explained without God, what do you need God for?