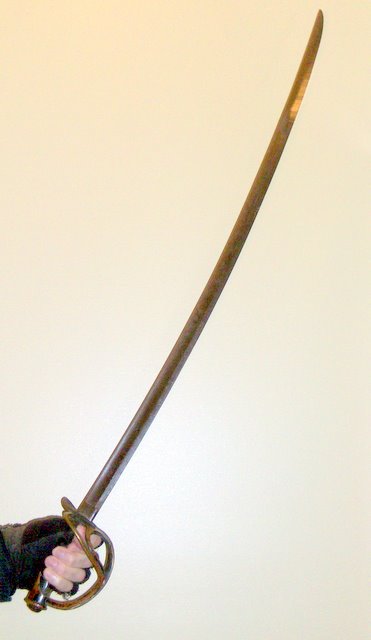 A few years ago a friend gave me a Civil War Cavalry saber as a gift. Until today I didn’t know much about its background. After checking the inscription on the sword, I discovered that it is a U.S. M1860 Light Cavalry Saber produced by Mansfield and Lamb in Forestdale, Rhode Island. During the Civil War the company produced more than 37,000 M1860 sabers, the only model they made. The inscription on the other side reads “U.S. C.E.W. 1863,” meaning that it was produced for Federal troops, approved by inspector Charles E. Wilson, and was made in 1863. It could have been used at Chancellorsville or Gettysburg or any of the later battles. I have no way of knowing for certain who used it or where or when, except to note that the sword itself is very well worn. It seems plenty heavy to me. It would take a strong man to control a horse with one hand while brandishing the sword with the other hand.

The gospel accounts mention swords mostly in relation to Jesus’ arrest in the Garden of Gethsemane. Matthew 26:47 says that when Judas came to betray Jesus, “with him was a large crowd armed with swords and clubs, sent from the chief priests and the elders of the people.” Just a few moments later, in a desperate attempt to saved Jesus from being arrested, Peter pulled out his sword and cut off the ear of Malchus, servant of the high priest.

We cannot confess Christ without encountering the resistance and hatred of many. Christ therefore warns his followers to prepare for battle, for they must necessarily fight for the testimony of truth.

My mind was drawn to this verse on Wednesday when I ate breakfast in Tupelo with Stephen Baldwin and Kevin McCullough. As we talked about the challenge of living for Christ in an increasingly secular world, Stephen shared how he came to faith soon after 9/11. “Let me show you the first verse I learned as a new Christian,” he said, pulling up a cross he was wearing on a chain around his neck. Engraved on the back was the last phrase of Matthew 10:34, “I did not come to bring peace, but a sword.”

Do you want a non-controversial Jesus? You’ll have to look somewhere other than the Bible. The gentle Jesus who smiles and makes everyone feel happy bears no resemblance to the mighty Son of God who came to bring a sword of judgment. Does he bring peace? Yes, and the peace he brings will one day cover the entire earth.

But that day is not this day.
To quote a line from a famous gospel song,
“This day the noise of battle, the next the victor’s song.”

Today we fight. Today we put on the armor of God and advance against the foe. Today we pick up our sword and enter the fray. Today we stand up for Jesus, knowing that not everyone will cheer us when we do.

This is no time for “sunshine soldiers” or “Laz-Z-Boy Christians.” It’s all hands on deck, man the battle stations, and prepare for war.

Do no be surprised when close friends oppose you or family members ridicule you. Jesus said it would be this way.

The Lord is on your side.

Lord of Hosts, you have promised to be with us when we take our stand for you. Make us worthy soldiers in your army. Refresh us by your Spirit when we grow weary in the battle. Give us such fellowship with you that we will not tremble before the world, the flesh or the devil but may stand strong in the power of your might. Amen.