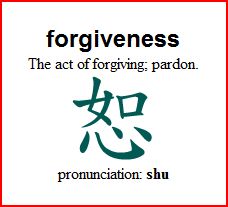 This is where the words of Jesus become very personal. We’re included in his prayer. When he prayed, “Father forgive them for they know not what they do", who was included in “them"? The soldiers, the mob, the women, the disciples, Pilate, Caiaphas, Annas, Judas, Peter and all the Jewish leaders.  But that doesn’t exhaust this statement. You were included in the “them” and so was I. He was praying for you and he was praying for me. “No. No. You don’t understand. I’m not like those people. I’m different. I’m not that bad. I’m not the kind of person who could crucify anyone. I’d never do anything like that.” Oh, yes you are, and yes you would, and yes you have many times, and yes you will again. You’re not as good as you look. If you had been there you would have been holding the nails. If you had been there you would have been clapping and cheering. If you had been there you would have been saying, “Crucify him.  Crucify him. Stick it to him again. Another nail. Let him have it.” We’re not that much different. We’re not that much better.

At this point we discover a hard reality that keeps us from forgiving the people who hurt us. At the root it is this: We think we’re better than they are. We think we would never hurt anybody the way they have hurt us. “I’m just not as bad as that. I’d never treat anybody the way they treated me.” We get angry because we think that we would never do to another person what they have done to us. How foolish. How false. How deluded we are when we think that way. It is our false pride that keeps us from the hard step of forgiving the unforgivable.

All of us know that it is easier to talk about forgiveness than it is to do it. And if we are honest, we all know how much we suffer when we forget to do what Jesus did on the cross. We need courage to take the giant step of forgiveness. However painful forgiveness may be, it is infinitely better than refusing to forgive. We will helped to do it when remember that Jesus forgave us when we were unforgivable.

Lord Jesus, I was one of the “them” for whom you prayed in such agony on the cross. For eternity I will say “Thank you” for including me. Grant me the grace to forgive as I have forgiven at such a great cost. Amen.