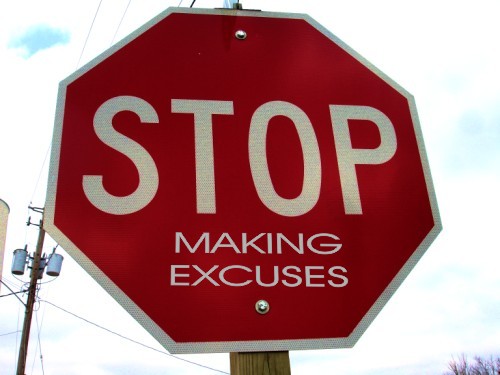 In an article about John Henry Newman’s Lenten sermons, Edward T. Oakes said that Newman had one theme that he returned to time and again:

No one sins without making some excuse to himself for sinning.

Somehow when I read that, my mind drifted back to a volleyball game more than thirty years ago. I remember that it happened after a church event in Midlothian, Texas where they divided up the teams between the young adults and the not-so-young adults. At that time I played with the younger crowd. Although we played with great zest, the “old folks” (most of them in their 40s) managed to beat us. I couldn’t believe it. As I walked off the court, I said to a football coach who played on the other team, “We’ve got an excuse.” To which he replied, “When you lose, you always have an excuse.”

When you sin, you always have an excuse.

When God asked guilty Adam if he had eaten the forbidden fruit, he offered this classic answer: “The woman you put here with me—she gave me some fruit from the tree, and I ate it” (Genesis 3:12).

We’re victims, we were tired, the kids were driving me nuts, I was caught by surprise, I didn’t think anyone would see me, I thought I deleted those files, we didn’t have a choice, she made me do it, he told me it was okay, I didn’t think it was wrong, if you had warned me better, you would have done the same thing, I just lost my temper, they deserved it, I don’t care what anyone thinks, and on we go.

We must not miss Newman’s key point. No one sins without making some excuse to himself for sinning.

The worst lies are the ones we tell ourselves. Our excuses keep us chained to bad habits, addictive behavior, sinful patterns, and they lead to stupid mistakes and keep us locked into a downward spiral of denial and cover-up.

In John 8:32 Jesus spoke words that have given hope to millions. “You will know the truth, and the truth will set you free” (John 8:32). That’s our verse. And here is our prayer.

Lord Jesus, you said, “I am the truth.” Now speak your truth into our hearts by the Holy Spirit. Clear away the cobwebs of self-deceit. Make us willing to be willing to face our own excuses so that we might be set free. Amen.