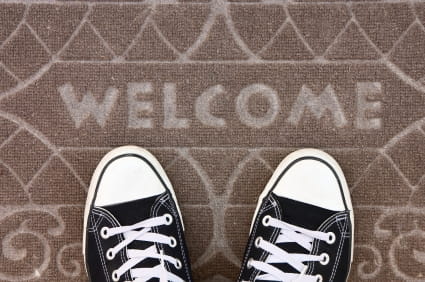 “Dwelt” is an unusual word.
It means to live among.
One version uses the phrase “moved into the neighborhood.”

Perhaps an illustration would help. Let’s suppose that I owned an ant farm, and for reasons known only to myself, I loved those ants more than anything in the world. How could I communicate my love to them? I could shout, “I love you,” but because I speak English and they speak ant, they wouldn’t understand. I could write them a letter, but they couldn’t read it. I could shrink down to ant size, but they wouldn’t recognize me. But if I had supernatural powers, there is one thing I could do. I could take on the form of an ant, be born as an ant, live as an ant, and communicate as they do. Then I could find a way to say, “I love you.”

That is what God did. He didn’t mail a letter or shout from heaven. He did the one thing we could understand. God himself came down and entered the human race. He moved into the neighborhood and became just like us so that we would hear him saying, “I love you.”

We wouldn’t have done it that way. We’d schedule a press conference, call the TV stations, hire a press agent, have a parade, call in the dignitaries, sell tickets, and make a big deal so all the world could see. We would take the Madison Avenue approach.

But that’s not God’s way. Read the New Testament again. Instead of flash and splash, there is a frightened father, an exhausted mother, a dirty stable in wintertime, rags for diapers, and a feeding trough. There he is, ignored by the mighty and powerful—a tiny, helpless baby. Immanuel—God with us.

It’s so simple that you know it must be true. Only God would have done it that way.

A young man sat in my office and listened as I explained the gospel to him. Finally he said, “I just can’t believe all that stuff.” So I asked him, “What would it take for you to believe?” “I would believe if God came down and stood in front of me and told me himself,” he said. “My friend, he already has come down,” I replied. “He came down 2,000 years ago and lived among us. If you don’t believe that, then I have nothing better to offer you.”

One of the verses of a famous Christmas carol says it very well:

Christ, by highest heaven adored, Christ, the everlasting Lord.
Late in time behold him come, offspring of the Virgin’s womb.
Veiled in flesh the God-head see; hail the incarnate Deity.
Pleased as man with men to dwell, Jesus, our Emmanuel.
Hark, the herald angels sing, “Glory to the newborn King.”

Here is some really good news. Jesus moved into our neighborhood. Have you met your new neighbor yet?

Lord Jesus, we are glad that you moved into our neighborhood. If you had stayed in heaven, we would never have met you. Thank you for making us part of your forever family. Amen.