How to Kill a Giant

How to Kill a Giant 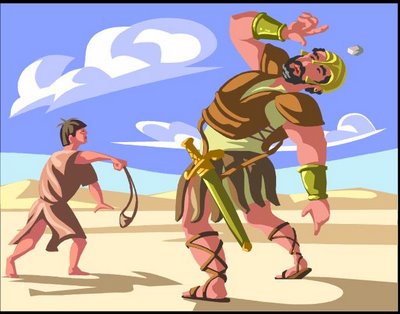 As they looked across the Elah Valley, they saw on the other side the men whom they would soon meet in battle. The Israelites were on one slope, the Philistines on the other. In between was a valley, in the valley was a ravine, in the ravine was a wadi, a dry creek bed. Soon that valley would be a battlefield.

Before we go on, it will help to know that the Philistines had started this war. Somehow the ragtag army of Hebrew farmers had defeated them just a few months earlier at the Battle of Michmash (1 Samuel 13-14). It had been a stinging, humiliating defeat. The Philistines meant to pay them back with interest.

Now the day has come. Indeed the moment has come. The Israelites are ready to do battle. Each man has a club, a hoe, a spear, a bow and arrow. Each man is ready to die for his country. When the word is given, the battle will begin.

But the word is not given because a strange thing happens. The Philistines are not coming down the slope. They aren’t coming! And at first, the men of Israel think maybe they’ve won by forfeit.

But before they can celebrate, a sight unfolds before them, the likes of which they have never seen before. Something is moving down the slope. Something big. Something huge. It’s like a tree maybe or a mountain. Whatever it is, it is covered with glittering bronze. It looks like a tank only they didn’t have tanks back then.

The thing got to the middle ground near the ravine and suddenly a shudder ran through the men of Israel. It’s a man. The biggest man they’ve ever seen. First Samuel describes him in detail. He stands six cubits and a span. That doesn’t mean anything to us but if you convert it to our system of measurement, it means he was 9 feet 9 inches tall. We’re told other interesting things about him. His name, of course, is Goliath. He’s clad from head to toe in armor. He wore a bronze helmet and a bronze coat of armor that weighed nearly 125 pounds. He wore bronze shin guards and had a bronze javelin slung over his back. His spear was like a weaver’s beam, meaning it was a thick shaft of wood, like a small log. The head of the spear had an iron point weighing 17 pounds. Ahead of him marched a soldier carrying a shield large enough to protect his entire body.

Having gotten their attention, this is what Goliath says:

“Why do you come out and line up for battle? Am I not a Philistine, and are you not the servants of Saul? Choose a man and have him come down to me. If he is able to fight and kill me, we will become your subjects; but if I overcome him and kill him, you will become our subjects and serve us.” Then the Philistine said, “This day I defy the ranks of Israel! Give me a man and let us fight each other” (1 Samuel 17: 8-10).


What Goliath proposes is the ancient tradition of single combat. A little game of one-on-one, winner take all. One man from your side, one from mine. He would represent the Philistines and someone would represent the Israelites. They would fight to the death and the army of the winner would win the entire battle. This plan saved time and potentially avoided useless bloodshed, but it only worked if someone accepted the challenge.

When Goliath says, “Am I not a Philistine?” (v. 8), the Hebrew text actually reads, “Am I not the Philistine?” Meaning, “I’m the baddest man the Philistines ever had. If you want to find out how bad I am, just come on down and fight me.” Arrogance drips off every word. Now what would you do? Would you go and fight Goliath? Maybe you’re 5’ 8”, 5’ 10” tops, 25 years old, a hard-scrabble farmer from Hebron. You’ve got a wife and three kids back home. Would you go and fight Goliath? It would be suicide. At least that’s the way the men of Israel felt. Verse 11 says, “Saul and all Israel were dismayed and terrified.” Even Saul was terrified. Why? Because now he’s on his own. He wanted to do his own thing so God said, “Fine, go do it.” And the Spirit of the Lord had left him. Without the Spirit of the Lord, Saul has nothing with which to face the giant. God had lifted the divine energy shield for Saul and now he is filled with terror.

And so the challenge went unmet. Goliath went back to his camp. But it’s not over, not by a long shot. Verse 16 tells us that Goliath came out 40 days straight, twice a day, morning and evening, to challenge the men of Israel. Each day it was the same: No one would answer the challenge. God’s people were losing the battle before it started.

I imagine that the military men of Israel got together each night and tried to formulate a plan. I’m sure they talked strategy and tactics. Saul was there along with Big Abner and the top brass. Maybe they even set up a model battlefield: Two clumps of dirt with the valley in between. They probably prayed, “O God, help us defeat the Philistines.” The next day would come, they would line up along the lip of the valley, Goliath would come out, yell and swear, and the whole army would run away. For 40 days! No one knew what to do.

It only takes one giant to stop you as long as you look at life from the human level. Our lens picks up a giant ahead and suddenly he fills the whole screen until the giant is all we can see. At ground level, giants unglue us and we can’t go on. The problem is not how big the giant is, it’s how small he makes us feel. So small that we don’t have a chance. Giants defeat us not because they’re big but because they make us feel small.