Is Tim Tebow a Blasphemer?

Is Tim Tebow a Blasphemer? 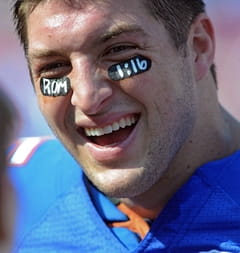 Is Tim Tebow a blasphemer?

You don’t have to take my word for it. Doyel, national columnist for CBSSports.com, says so in his column called Unbelievable – Tebow Believes Faith Equates to Starting in the NFL. This is Doyel’s conclusion:

And that’s more than wrong.

Pretty strong words, given that in the Old Testament blasphemers were stoned to death (Leviticus 24:11-16).

So what is it that Tebow has done that in the olden days would have led to his stoning? Well, it has to do with Tebow’s “faith” that God will take care of him as he fights to beat out Kyle Orton for the starting quarterback position on the Denver Broncos football team. Doyel says that Tebow believes he is destined by God to succeed in the NFL, notwithstanding the fact that many observers think he’s not likely to ever be a starting quarterback for any NFL team.

There are several facts to consider. First, Tim Tebow was a terrific college quarterback who while playing at Florida won the Heisman Trophy and two national championships. Second, he has been bold and outspoken about his Christian faith, to the point that in college he put Scripture verses on his eye black. Third, regarding those who doubt that he will succeed in the NFL, he has replied, “I am relying as always on my faith.”

Gregg Doyel thinks that vague statement implies a divine guarantee that Tebow will succeed in the NFL. I don’t get that at all. If you ask one hundred Christians, “Do you rely on your faith?” they will all answer yes, and it will mean something like “I’m trusting God with my future.” What else could it mean?

But his confidence isn’t only in himself. It’s in his God. Tebow has basically said, and I’m paraphrasing here, “I’ll be a starter in this league because God loves me that much.” (underlining added)

Well, yeah, it’s pretty easy to prove your point when you put words in a man’s mouth that he never said. Doyel called that line “a bit of poetic license.” I think it’s closer to “bearing false witness,” which violates the Ninth Commandment (Exodus 20:16).

I have no idea whether or not Tim Tebow will ever be a starter in the NFL. I think he’ll do just fine in life with or without an NFL career. Who knows? Maybe he’ll win the Super Bowl or maybe a freak injury will end his career tomorrow.

No one but the Lord knows what the future holds. That goes for Tim Tebow and for all the rest of us.

That’s pretty much what Christians everywhere believe. The odd thing is, Gregg Doyel says he prays to the same God as Tebow. And that makes it that much sadder when he twists Tim Tebow’s words to make them say something he never actually said.