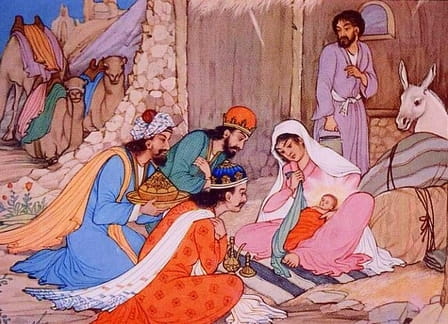 "Wise Men from the East" by Iranian painter Hossein Behzad

“Entering the house, they saw the child with Mary his mother, and falling to their knees, they worshiped him” (Matthew 2:11).

When the Wise Men finally found the baby Jesus, were they disappointed? They might have been. After such a long journey and after the detour in Jerusalem, did it seem anticlimactic?

He had no scepter in his hand, commanded no armies, gave no speeches, passed no laws.No royal decree came from his lips.

There was nothing to make you think he was a king. To the outward eye, he was nothing but a peasant child born in dire poverty.

But to the Wise Men, he was a king. He possessed more royalty in a cradle than Herod possessed in his fine palace. He was greater in his infancy than Louis XIV in his ascendancy. He was more powerful as a child than Napoleon as an emperor.

But it did not seem that way. The eyes of flesh revealed nothing but a normal baby, gurgling and cooing, moving his tiny hands side to side, reaching eagerly for his mother's breast.

The Wise Men saw beyond the present and in deep faith, they worshipped him. They saw that this child would one day rule the world and they were not ashamed to fall on their faces before him.

Let me paraphrase the words of one Bible commentator: Although we read that the Wise Men met Herod, we do not read that they worshipped him. But when they found this tiny baby, these great men fell on their faces before him.

To this baby they gave the honor due to a king.
What Herod craved, the baby received.

Kneeling does not come easy for most of us. We stand or we sit. Rarely do we kneel. Kneeling requires us to admit that we are in the presence of someone greater than us. There is no kneeling among equals.

The Wise Men offer a lesson to us today. These great men, highly respected and well-educated, having traveled so far, understood who Jesus was. God’s Spirit had led them from somewhere in the east (Persia, perhaps) to a distant land, among people they did not know, to a house in the tiny village of Bethlehem.

No doubt others knelt before them in their homeland. But they do not hesitate to bow before Jesus because they understand what royalty demands.

Lord Jesus, we kneel in your presence because you are greater than we can imagine. Be glorified in my life today. Amen.

Musical bonus: Point of Grace revisits the story of the Wise Men with a song called One King.