Malchus and the Midnight Miracle

Malchus and the Midnight Miracle 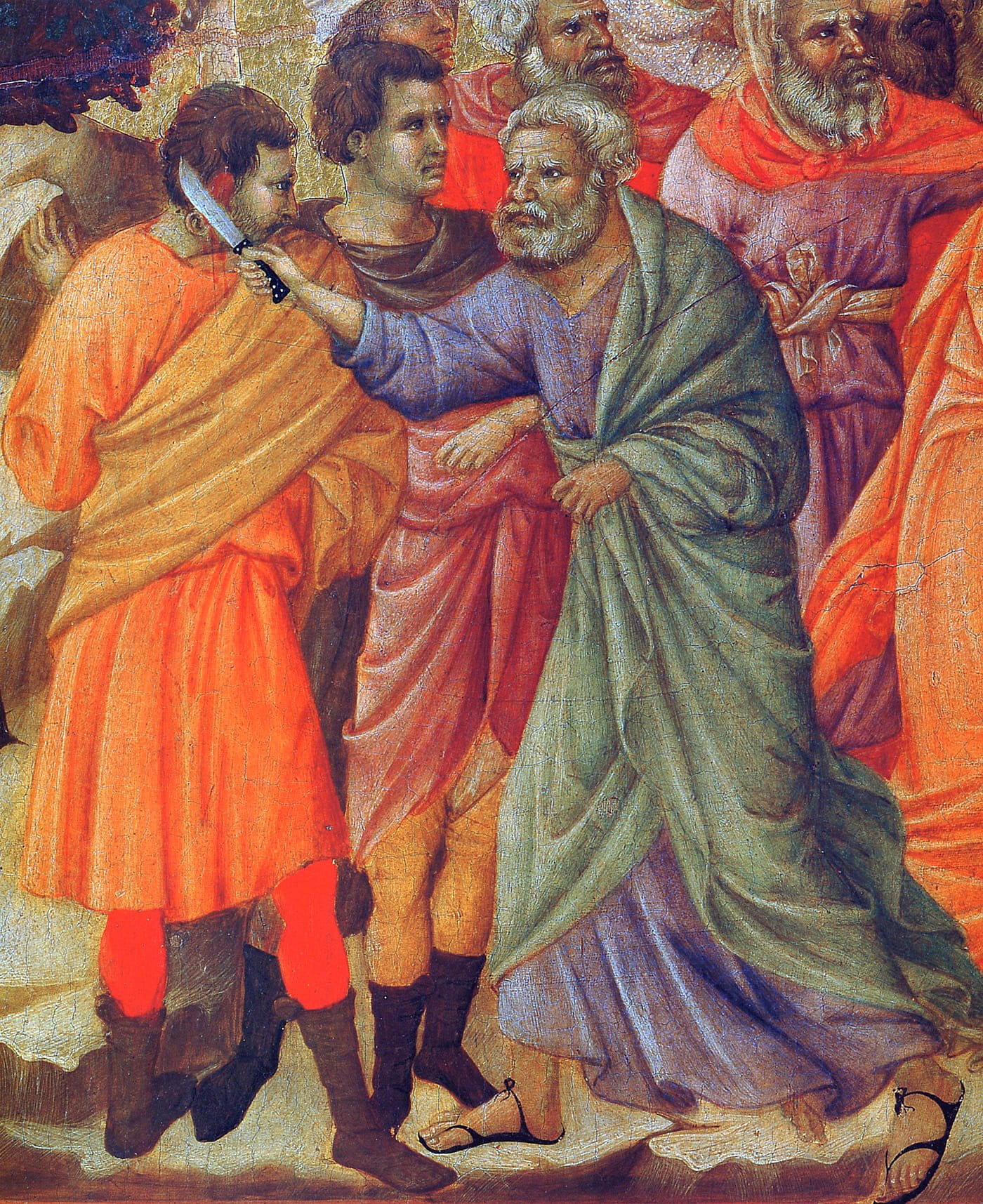 Peter cuts off Malchus’ ear, painted by Duccio in 1308.

“When Jesus’ followers saw what was going to happen, they said, ‘Lord, should we strike with our swords?’ And one of them struck the servant of the high priest, cutting off his right ear” (Luke 22:49-51).

Jesus has been praying alone. In the distance the disciples can see the flickering lights as a group of soldiers crosses the Kidron Valley. They are led by Judas.

It all happened so quickly. A brief conversation, a hurried kiss on the cheek, the soldiers step forward to take Jesus away. In the confusion and semi-darkness, Peter knows he has to act, has to do something to protect his master. Grabbing his sword, he takes a wild swing, aiming at no one in particular. The sword finds its mark but not as Peter intended. If he hoped to scare off the soldiers, it didn’t work. If he hoped to inspire the other disciples, that might have worked had not Jesus stepped in.

He lopped off the ear of the high priest’s servant. No doubt the servant fell to the ground and began screaming in pain. Blood must have come spurting out of the hole where his ear had been. The soldiers would have drawn their swords, ready to kill Peter. But before things got out of hand, Jesus touched the servant’s ear, healing it instantly. And just like that, the crisis is over.

But the disciples never forgot it. Years later this midnight miracle shows up in all four gospels. Only John tells us that it was Peter who swung the sword and that Malchus was the servant’s name. Only Luke tells us that Jesus healed his ear.

Sometimes when you follow Jesus, you have to lose in order to win. That’s what Jesus meant when he said to Peter, “Put your sword back in its place for all who draw the sword will die by the sword” (Matthew 26:52). Brute force does not advance Christ’s kingdom. We cannot accomplish God’s work by bullying people into submission. When we try that approach, it may produce short-term results, but it backfires in the end because the appeal to brute force means that we don’t really believe in God. If we did, we wouldn’t try to take matters into our own hands.

I don’t blame Peter for not fully understanding those words. It’s after midnight, and he is tired, distraught, confused, angry, worn out, upset, and in his despair he wants to do something, anything, that will rescue Jesus.

But Jesus doesn’t need his help.
He doesn’t want to be rescued.

What seems to be the cluttered rush of events turns out to be the plan of God unfolding to bring salvation to the world. When evil seems to be winning, Christ calmly submits, knowing that in the end, God’s will must be done.

When Jesus restored Malchus’ ear, it was the last miracle of bodily cure Jesus ever wrought. It reveals the true heart of Jesus. In this little story we see how Jesus treats his enemies. When they come for him, he does not resist. When they are hurt, he heals them. He receives their attacks and then is led away to die for the very men who are putting him to death. He will not use his divine power to escape their clutches. He only uses his power to heal those who have been hurt by his followers.

Lord Jesus, teach me to trust you when I am tempted to lash out. Where there is hatred, let me sow love. Amen.