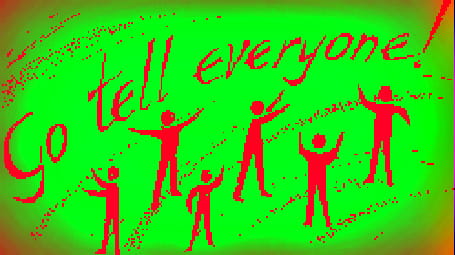 “When they had seen him, they spread the word concerning what had been told them about this child” (Luke 2:17).

Shepherds often came from the base elements of society. In that day, they were so little trusted that a shepherd’s testimony would not be accepted in a courtroom. Shepherds were on the lowest rung of the economic ladder and had little or no formal education.

That makes the story even more remarkable. After they heard and saw the spectacular angelic revelation, they went to Bethlehem where they discovered the Savior of the world in a feeding-trough in a rough, outdoor barn, perhaps a cave carved out of the rocky hillside. The birth and the revelation didn’t seem to go together. Yet there it was—all from the hand of God.

On that night in Bethlehem, outside of Joseph and Mary the only people who knew Christ had been born were the shepherds. It wasn’t a likely way to win the world. Certainly not the way we would have done it. If we had planned it, Jesus would have been born in Jerusalem, to a wealthy family, and attended by the high and mighty. That way no one would doubt the Son of God had come to earth.

But God’s ways and ours are not the same. He chose to reveal the news to the shepherds first of all. After their initial (and understandable) fear, they responded in faith. They believed the angel, they immediately went to Bethlehem, and they found the baby Jesus. Everything was just as the angel said it would be.

What did they do then? They told everyone they met what they had seen and heard.

They did what all Christians should do. They told others what they had seen and heard. When you get down to it, that’s all evangelism is. It’s telling the good news about Jesus Christ to someone else.

What the shepherds did, we all can do. You need no authority, no permission, and no special training to witness for Christ. Simply tell what you know to be true. Talk about Jesus. Tell who he is and what he has done for you. Share your story and then invite others to come to Christ just as you did.

Lord Jesus, I pray for an opportunity to tell someone about you today. Amen.

Musical bonus: A friend suggested I find a video featuring sign language. That led me to today’s video, which is unlike anything I’ve ever seen. Watch and listen as this very gifted young man does an interpretive sign language version of Go Tell It on the Mountain by Pentatonix.