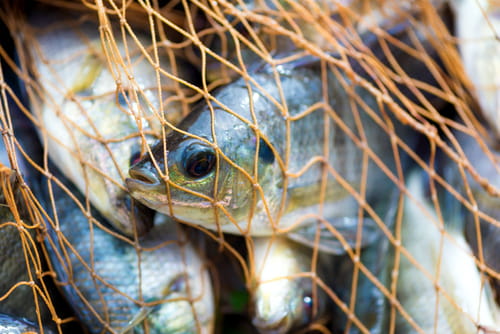 “For he and all who were with him were astonished at the catch of fish that they had taken” (Luke 5:9)

This is what fishermen dream about.

They spend a lifetime fishing in hopes that maybe one day something like this will happen to them. What a sight! So many fish came into the nets that they begin to break. The men end up filling both boats with so many fish that they began to sink. Think about that. Two overloaded boats with fish flopping everywhere slowly coming to shore. This is the biggest catch ever—and it happened in the middle of the day.

Please note that the fish were there all along. It’s not as if Jesus created the fish on the spur of the moment. Those fish were in the water the night before; Peter just couldn’t find them. But when Jesus is in the boat, everything changes. Everything happens according to God’s plan. He allowed Peter to fail so he would learn what he could do with Jesus’ help.

We tend to look at failure as a final verdict, but God often allows us to fail just like Peter so that when the answer comes, we will not be tempted to take credit for what God has done. As Bill Gates remarked, “Success is a lousy teacher. It makes smart people think they can do no wrong.” Peter had to fail so that he would be prepared for overwhelming success later.

There is a nice moral to this story: Empty nets without him; full nets with him. Let’s go fishing with Jesus every day!

Lord, thank you for the reminder that when I follow you, all things are possible. Increase my faith even when the nets seem empty. Amen.