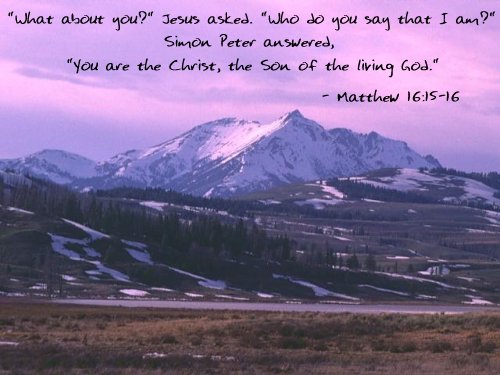 It all comes down to this eventually.


In the Greek text the word you has an enormous stress. In fact, the word you really goes at the first of the sentence. It is as if Jesus is saying, "But you who have followed me and have known me from the beginning, who do you say that I am?" It is the greatest question in the entire universe and it is one which every person must eventually answer.

Whenever there was a question, Peter would always be the first one to answer. And when Peter answers here, he is not speaking simply for himself, but for all the disciples. His answer is very, very specific. "You are the Christ, the Son of the Living God" (Matthew 16:16). In the Greek, the word "the" is repeated four times. You could translate it this way: "You are the Christ, the Son of the God, the Living One." Peter was saying, "I know who you are. You are the Messiah sent to save us and you are the Son of God from heaven." It is short and simple. Everything necessary for salvation is included in that statement.

I think some people would read that statement and say, "Well, that's no big deal. I would say that, too." Sure, Christians everywhere would stand up and say, "You are the Christ, the Son of the Living God." But Peter was the first person in human history ever to say it out loud. And he said it when few were with Jesus and many were against him. He deserves all the credit, for without his confession there would be no Christian church.


Does it matter what we believe? These are the words of C. S. Lewis, from Mere Christianity:

I am trying here to prevent anyone saying the really foolish thing that people often say about Him: "I'm ready to accept Jesus as a great moral teacher, but I don't accept His claim to be God." That is the one thing we must not say. A man who was merely a man and said the sort of things Jesus said would not be a great moral teacher. He would either be a lunatic—on the level with the man who says he is a poached egg—or else he would be the Devil of hell. You must make your choice. Either this man was, and is, the Son of God: or else a madman or something worse. You can shut Him up for a fool, you can spit at Him and kill Him as a demon; or you can fall at His feet and call Him Lord and God. But let us not come with any patronizing nonsense about His being a great human teacher. He has not left that open to us. He did not intend to (pp. 52-53).

Does it matter what we believe about Jesus? Yes, it does. The truth about Jesus is the difference between heaven and hell.

Jesus has a question for you today, it's the same one he asked 2000 years ago.

Our God and Father, we gladly take our place with the confessing church around the world. We do believe that Jesus Christ is the Son of the Living God. May we never be ashamed of him and never be ashamed to make that confession. Amen.