Why I Signed "The Manhattan Declaration"

Why I Signed "The Manhattan Declaration" 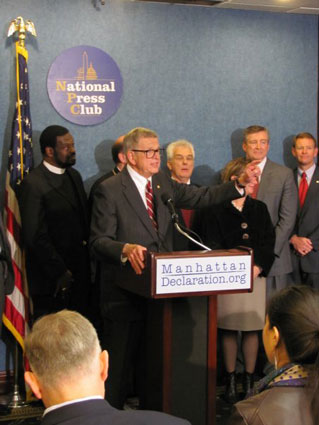 Last Friday a group of Orthodox, Catholic, and evangelical Christian leaders released The Manhattan Declaration, a ringing statement regarding the dignity of human life, the importance of marriage as the conjugal union of one man and one woman, and the rights of conscience and human liberty in our increasingly diverse society. I used the word "ringing" advisedly, because the statement sounds a strong call for believers across the broad spectrum of Christian belief to join together in affirming our intention to safeguard the unborn, to fight for the traditional understanding of marriage, and our willingness to speak out against any coercive law forcing us to deny our deeply-held beliefs.

Over the weekend I added my name to the more than 30,000 people who have signed Manhattan Declaration. You can sign it also-and I encourage you to do so if you agree with the declaration. I signed it because it represents a united front of Christians from many different backgrounds. I think it's a positive thing when Catholic, Orthodox, and evangelical Christians can unite around issues of common concern. And I signed it because the declaration is well-written, thoughtful, carefully stated and yet bold in what it says. The entire document is over 4000 words so it will take a few minutes to read all of it.

Let me reproduce the closing two paragraphs because they give a flavor of the entire declaration.

Going back to the earliest days of the church, Christians have refused to compromise their proclamation of the gospel. In Acts 4, Peter and John were ordered to stop preaching. Their answer was, "Judge for yourselves whether it is right in God's sight to obey you rather than God. For we cannot help speaking about what we have seen and heard." Through the centuries, Christianity has taught that civil disobedience is not only permitted, but sometimes required. There is no more eloquent defense of the rights and duties of religious conscience than the one offered by Martin Luther King, Jr., in his Letter from a Birmingham Jail. Writing from an explicitly Christian perspective, and citing Christian writers such as Augustine and Aquinas, King taught that just laws elevate and ennoble human beings because they are rooted in the moral law whose ultimate source is God Himself. Unjust laws degrade human beings. Inasmuch as they can claim no authority beyond sheer human will, they lack any power to bind in conscience. King's willingness to go to jail, rather than comply with legal injustice, was exemplary and inspiring.

Because we honor justice and the common good, we will not comply with any edict that purports to compel our institutions to participate in abortions, embryo-destructive research, assisted suicide and euthanasia, or any other anti-life act; nor will we bend to any rule purporting to force us to bless immoral sexual partnerships, treat them as marriages or the equivalent, or refrain from proclaiming the truth, as we know it, about morality and immorality and marriage and the family. We will fully and ungrudgingly render to Caesar what is Caesar's. But under no circumstances will we render to Caesar what is God's.

That will put some steel into your soul. God bless those who had the courage to write the Manhattan Declaration. May the Lord use it to give us new resolve to do God's will in these days of growing moral confusion.