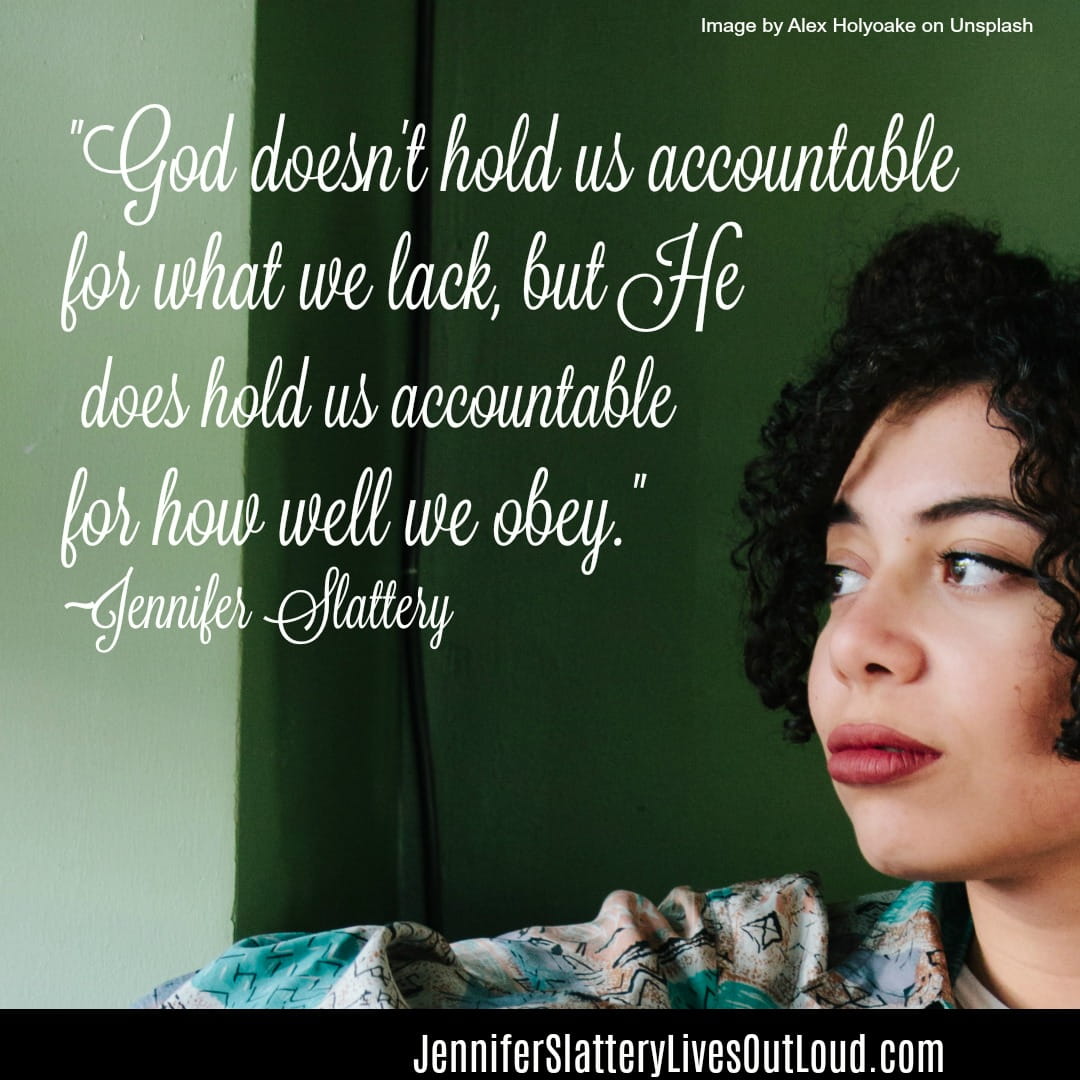 Obedience is rarely easy and quite often, doesn't make sense.

When God calls us to do something, whether that's to reach out to a neighbor, initiate a difficult conversation, or join or launch a new ministry, it's easy to focus on all our weaknesses and insufficiencies. But here's the deal: God doesnt' hold us accountable for what we lack. He does, however, hold us accountable for how well we obey. How fully we surrender--and trust that this life, this task, whatever it is, isn't about us or up to us.

Perhaps you've read the story of when the Israelites lay seige to the ancient city of Jericho. Generations earlier, God had promised the Jewish patriarch, Abraham, that his descendents would receive a massive chunk of land. But first, they'd be enslaved and oppressed. But God wouldn't forget them. In His perfect timing, He'd send a liberator, which H did through a man named Moses, and ultimately through this chosen nation God would bless all people of all time--all who aligned themselves with Him.

Years pass, Moses dies, and a faithful and courageous warrior named Joshua takes command of the Israelite army. Through him, God promises to overthrow nations and expand His people's terriroty. But there's a problem. People live in this land. Big, strong, and militant people, including those protected within the thick, tall walls surrounding Jericho.

Walls that, to the human eye, seemed impenetrable. And yet, as Jesus said in Matthew 19:26b,
all things are possible with God."

He proved this true when Jericho's walls came "tumbling down*" and His people charged in and took the city. (Joshua 5:13-6:27)

I've read this account numerous times, always from the perspective of what God did--which is amazing. But today I suggest we view it through a different lens. What must it have felt like for the Israelites to march around a heavily fortified, six-acre city, not once, not twice, but thirteen times?

As tthis wall, six to eight meters tall and two to four meters thick, loomed beside them, swallowing them in its shadow, did their courage fade?

I imagine when they first received God's instructions, they felt excited. "Hoorah! God has given us the city! Let's go!"

Did their enthusiasm wane once it came time to, literally, put steps to their faith? When God told them not to rally their troops into battle but instead to walk around the city, which likely spanned six acres, seven times.

On day two, halfway around with no sign of victory in sight, did they begin to feel foolish? Then came day three, day four, five and six. How easy it would have been to give in, to walk away, to chalk it all up to a crazy idea not worth pursuing.

Consider the thoughts that must have filled their minds. Surely the God who parted the Red Sea could move faster. Seven days? Wasn't there a more efficient way?

Maybe, if God was only concerned with conquering the city, but God had bigger plans--eternal plans. It's easy to praise God when everything goes as expected. It's easy to trust Him when life is easy. It's another matter entirely 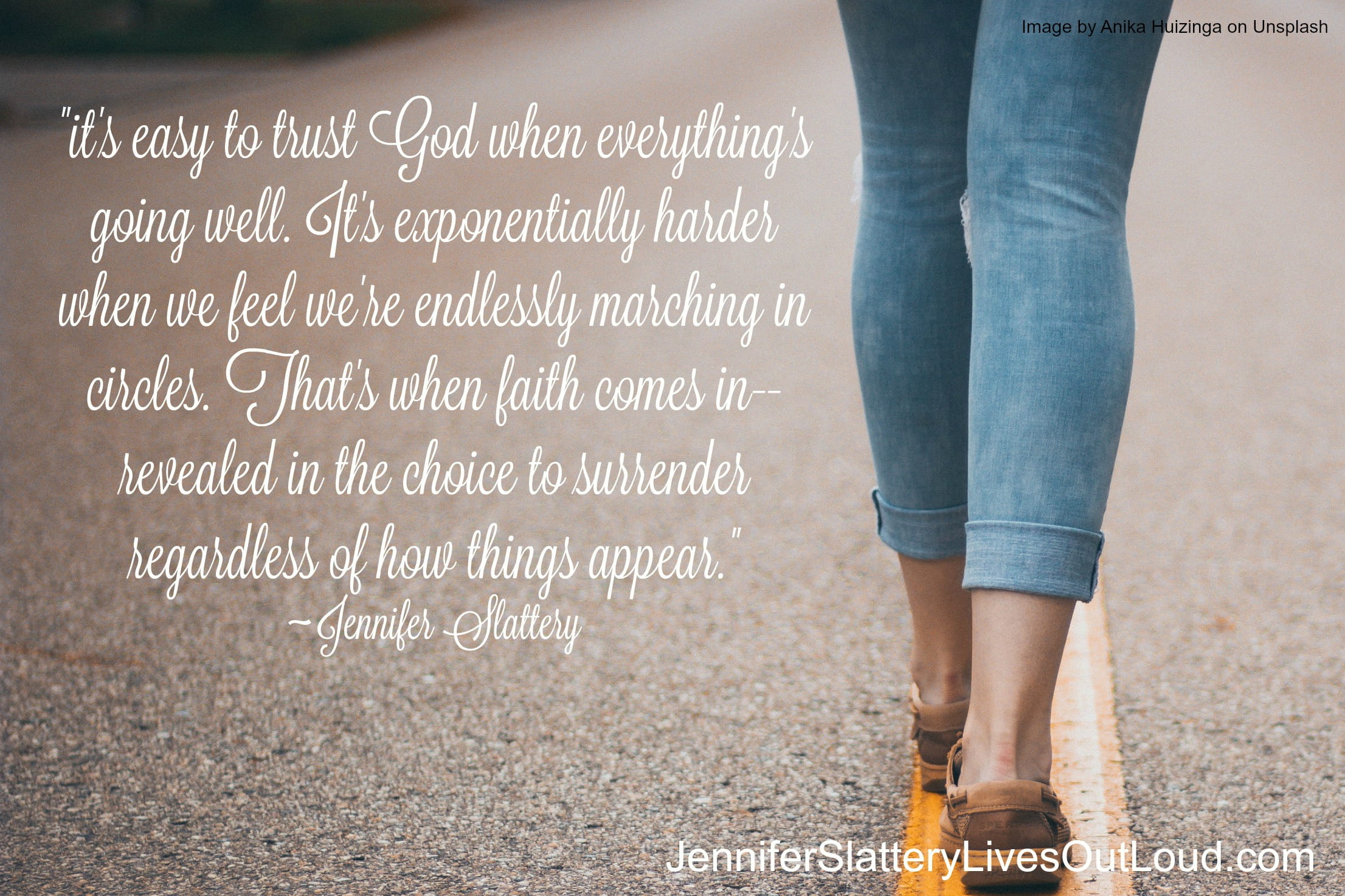 when everything runs contrary to reason and we feel like we're endlessly marching in circles.

Then imagine their jubilation when they rounded that corner for the  thirteenth time and the ram horn blasted.  The faithful marchers shouted with victory, then the walls came tumbling down.

What's your Jericho and where are you on your march?

If you enjoyed today's post, I encourage you to sign up for my free quarterly newsletter to receive great content (a short story, devotional, recipe, and more!) sent directly to your inbox. You can do that HERE.

Want Jennifer to come speak at your next women's event? Find out more HERE and contact her HERE. Find out more about Wholly Loved Ministry events HERE.