��Why would God degrade Mary as he did?”

“Why would God degrade Mary as he did?” 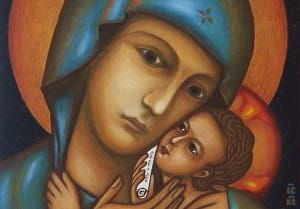 [UPDATE: The young woman who wrote the letter below has responded to my answer of it. You can read that response here.]

This week I received a letter that read:

First of all, I’ve been an avid follower of your work for the past few months, so I’m very excited to write my first letter to you. Compared to all the serious issues that you cover, this one may seem quite trivial. Nevertheless, it’s been nagging me for some time because I can’t fully reconcile it with my beliefs.

Like many other progressive Christians, I have difficulty accepting the story of the Virgin Birth. However, while most focus on its scientific impossibility, I’m preoccupied with its psychological ramifications.

First of all, I acknowledge that I may be projecting my own anxieties – I’m a 23 year old woman and have a profound fear of pregnancy and childbirth. Nevertheless, it seems to me that making a woman have a child is invasive, even abusive. I can’t seem to view pregnancy as anything but degrading, and Mary had to suffer the further indignity of appearing to have lost her virginity before marriage.

I realize that I can’t expect a woman of a different time and culture to share my mentality. I also know that having a child was a sign of God’s favor, and that women didn’t have a choice about having children anyway. Still, why couldn’t God have chosen Mary to be the mother of Jesus once she was married and had children? If Mary felt the shame and self-loathing that I imagine I would have felt in her position, would God have chosen her?

I know that you receive many letters on more pressing concerns, so I understand if this is not a priority. However, I have never heard anyone address this topic. Please share any insights you have with me – it would mean a lot.

Dear young woman who wrote me this:

I imagine you won’t be surprised to hear me say that what first jumps out at me are your difficult feelings about pregnancy. I understand you being afraid (if not “profoundly” afraid) of being pregnant; I get afraid if I have a gas pang. What I’m decidedly uncomfortable with, though, are your words, “I can’t view pregnancy as anything but degrading.”

Degrading is a tough, tough word; I’m going to assume you meant it. So the pertinent question, to me, is, why would you feel that way about pregnancy? What is it about seeing a pregnant woman contentedly holding the hand of her husband that makes you think that woman is in a state of degradation? To such a scene most people’s response is, “Ah, isn’t that sweet? Life is such a precious miracle.”

You, however, think, “Look at that woman’s degradation.”

Surely you understand how deeply problematic—if not something pretty close to alarming—is that response.

I’m not very comfortable saying this, but I can’t help but feel that the real reason you wrote me this letter—the true concern that you have with this matter—has nothing to do with the theological implications of the virgin birth of Jesus. My guess is that what you’re really seeking is help understanding the core cause of your associating pregnancy with degradation. I’m guessing that you’re more aware than you’d care to be of how troublesome is that response, of how surely it points to a problem within you that you desire to have solved.

My guess is that you’ve transferred the feelings of “shame and loathing” that pregnancy evokes in you onto the most famous pregnancy of all: one that didn’t involve sex—or any of the “degradations” that society, most religious traditions, and certainly traditional Christianity so readily—so eagerly—associate with sex.

You don’t think that, in being chosen by God to give birth to the savior of the world, Mary was blessed by God. You think Mary was abused by God. And you think that despite what I’m sure you’ve read, which is the famous Magnificat, or Song of Mary, found at Luke 1:46-55:

“My soul magnifies the Lord,
and my spirit rejoices in God my Savior,
for he has looked on the humble estate of his servant.
For behold, from now on all generations will call me blessed;
for he who is mighty has done great things for me,
and holy is his name.
And his mercy is for those who fear him
from generation to generation.
He has shown strength with his arm;
he has scattered the proud in the thoughts of their hearts;
he has brought down the mighty from their thrones
and exalted those of humble estate;
he has filled the hungry with good things,
and the rich he has sent away empty.
He has helped his servant Israel,
in remembrance of his mercy,
as he spoke to our fathers,
to Abraham and to his offspring forever.”

That doesn’t much sound like a woman struggling with “shame and self-loathing,” right? I mean … right? She sounds elated about what’s happened to her. She’s singing about it.

I wouldn’t start singing if I found a sack of gold. I might hum a little. I might whistle a happy tune as I dragged the thing back to my car. But that’s about it.

Anyway, please forgive what I know can only come off here as my intrusive presumptuousness. You didn’t ask for my advice on your relationship to pregnancy, so it’s obnoxious of me to offer it anyway. I’ve only done so in hopes of encouraging you to consider the possibility that it might be a good idea for you to speak with someone about your revulsion to pregnancy, which I think most people would agree is unnatural, if not manifestly unhealthy.

And do let me hasten to be extremely clear about the fact that I am not, in any way at all, suggesting that you, or any woman, should want to be pregnant. That’s hardly something I would say. What I am suggesting is that, if you really do find pregnancy as repulsive and degrading as you say you do, then you should think about talking to someone about that—preferably a trained mental health professional.

I’m also really not saying that you’re crazy, or anything near it. We’re all insane about sex, and just about all things related to it. We should all see a shrink about how tweaked we are about sex. But the one thing relative to sex that pretty much everyone agrees upon is that a pregnant woman is a wonderful, life-affirming, ultra-positive sight. People love pregnant women so much they’re forever touching them. But you have pretty much the exact opposite response. And that, I believe, is a phenomenon worthy of your serious attention.

All right; enough about that.

And now this post is as long as any blog post should be. So tomorrow—well, let me say next time, because already tomorrow is looking pretty darn dense—I’ll talk a bit about why I feel that God, in manifesting himself on earth as Jesus, opted to go with the whole (genius!) Virgin Birth thing.

God bless you, sister. Sorry again if I’ve hurled at you anything like a curve ball. Trust me: I’m on your team. That’s why I’m as honest with you as I feel that your precious trust in me morally obliges me to be.