At the recent Keep Believing Ministries (KBM) board retreat, we unanimously approved making China our first major project. Despite decades of Communist oppression, the church in China has not only survived--it has thrived. Here are three articles that explain the amazing growth of the church in the world's most populous nation:

Here's a key quote from the "Wildfire" article by Marvin Olasky:

China's evangelism explosion means that in many churches the leaders have only two or three years of Christian experience—and that's rarely enough time to develop a consistent Christian worldview. Many interviewees spoke of discipleship as their churches' greatest need. The church gender gap, with more women than men attending, also receives scrutiny, with the common explanation an indictment of males for a self-centered pridefulness that sees admitting problems as signs of weakness.

American Christians can help China's house churches by providing discipling resources such as internet seminary lectures and also publications that apply a Christian worldview to cultural and professional issues. (Materials need to stay away from anything that looks like foreign involvement in Chinese politics.) Bibles no longer need to be smuggled in, since state-approved religious organizations now print Bibles and happily raise money by selling them to house churches. (Real loosening here, of course, would be for the state to allow legal importation of all translations, so Christians would not necessarily have to put up with just the stodgy one that is printed.)

American Christians considering living in China should realize that their opportunity to worship alongside Chinese Christians is strictly limited, but the prospects of making contact by working in businesses or teaching English are nearly limitless. One small group leader within a house church said, "We are such young Christians. We look up to the U.S. for living examples of how to lead Christian lives."

God has opened a door for KBM to assist the Chinese church. We want to equip 25,000 Chinese pastors and church leaders with free copies of the Chinese edition of An Anchor for the Soul. Even though the book has only been circulated since March, thousands of copies have been distributed across the country. Two weeks ago, when I taught at the Global Proclamation Academy in Dallas, I met a young house church pastor from a coastal city in southern China. When I offered him a copy of Anchor in Chinese, he said, "I already have it. That's a good book." He had no idea that I was the author. 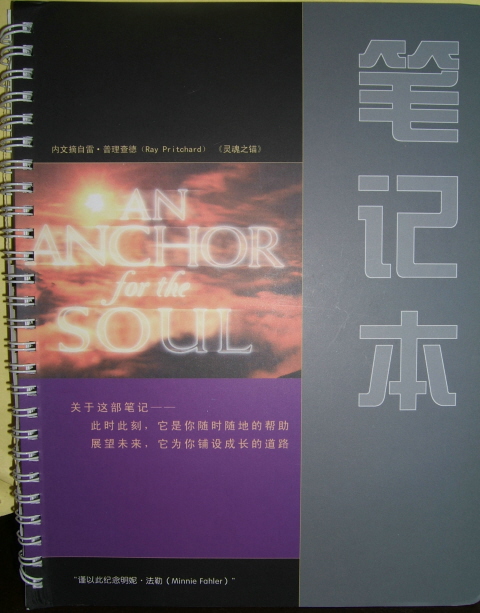 The Chinese cover is similar to the English edition. 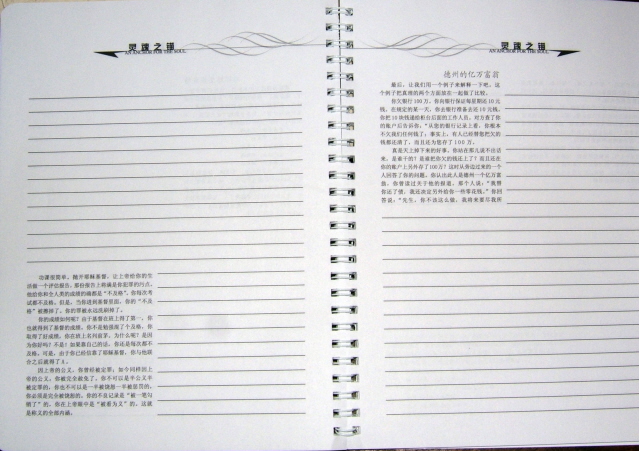 The publisher designed the book as a spiral-bound notebook,

with plenty of space for jotting down notes and questions. 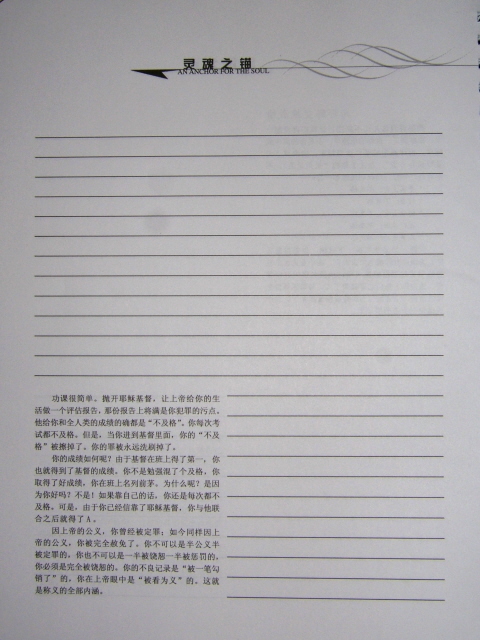 Here's a close-up of a single plage. 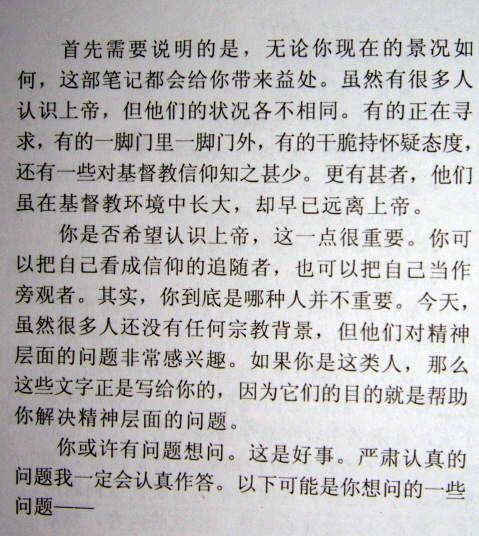 A close-up of the text on a single page.

Since I can't read Chinese, I don't know exactly what this says, except that I know that it comes from an early part of the book. Perhaps a reader who knows Chinese can translate it for me.

For those who don't know, An Anchor for the Soul is a simple presentation of the gospel in "Wal-Mart" language. (That's a useful image since Wal-Marts can be found in many of China's larger cities.) I wrote it to reach people who don't go to church and don't read the Bible. It's an evangelistic tool to help people find eternal life through Jesus Christ.

We want to give free copies of the Chinese edition to 25,000 pastors and church leaders. Since it costs approximately $1 to print and distribute each copy, we are asking God for $25,000. We would like to have the books printed by the end of the summer so that the Chinese churches can have them in time for the fall.

In the future, we hope to make it easy for you to support our projects by offering a way to donate online. Right now that isn't possible. So we're asking you pray and ask God if you should be involved in the Anchor for China project. If God touches your heart and you want to give, make your check payable to Keep Believing Ministries, and be sure to write China in the Memo section. 100% of what you give will go to purchase copies of Anchor in Chinese.

Send your check to:

Thanks for reading this far. I hope you will consider joining us in making this evangelistic tool available to 25,000 pastors and Christian leaders in China.

You can reach the author at  ray@keepbelieving.com. Click here to sign up for the free weekly email sermon.