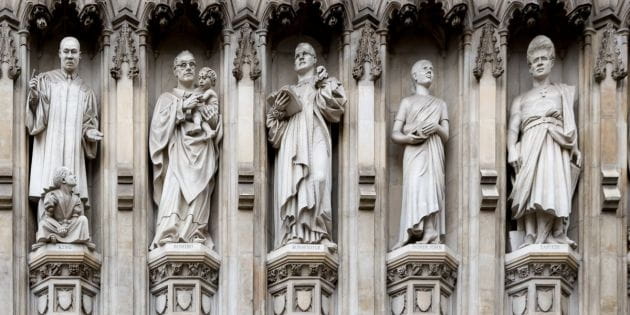 Seventy years ago, April 9th 1945, Dietrich Bonhoeffer was executed by the Nazi regime in Germany. A complicated man, Bonhoeffer wrestled to live out his convictions and still stay alive during one of the most deadly times in world history. Theologians of every stripe admire his writings (and his character) but on the anniversary of his death, Victoria J. Barnett writes that to fully understand him we should first dial back the hero worship.

“If we can understand Bonhoeffer outside the box—not as saint, not as mythological hero, but as someone who reflected poignantly on evil’s consequences for the human conscience and spirit, for an entire culture and country, we may begin to uncover the person behind the mythology: a man who tried to face the darkness of his times. In the process, we may discover someone who can speak more directly to the darknesses and failures of our own.”

In Why Dietrich Bonhoeffer, Why Now, Eric Metaxes (whose book won WNS’ 2011 Christian Book of the Year) explains how Bonhoeffer is a figure that modern day evangelicals can relate to:

"Anyone who's a truly mature Christian, who has their eyes on Jesus, will recognize Bonhoeffer as a brother in Christ. Attempts by mostly liberal theologians to portray him as humanist or post-Christian are really off the mark…One of the reasons I'm glad my book has been published is to set that record straight. We need to see Bonhoeffer for who he was and not try to make him in our own image. Bonhoeffer was a robust, devoted servant of Jesus Christ.”

At Christian Headlines, Chuck Colson explains Bonhoeffer’s entanglement in a dark time in the German church in Why Bonhoeffer Still Matters:

“After Hitler rose to power, the Nazis tried to co-opt the German church, mixing Christian truth with Nazi doctrine. Shamefully, some church leaders allowed themselves to be drawn into this deal with the devil. Others, like Karl Barth and Bonhoeffer, refused.

As my former colleague Eric Metaxas writes in his inspiring new book, Bonhoeffer, in May of 1934, ‘the leaders of the Pastors' Emergency League held a synod in Barmen. It was there, on the Wupper River, that they wrote the famous Barmen Declaration, from which emerged what came to be known as the Confessing Church.’

The Declaration boldly declared independence from both the state and a co-opted church. It made clear that the signers and their churches were not seceding from the German church; instead, it was the co-opted German church that had broken away.”

Reflecting on his first time reading Bonhoeffer’s classic work The Cost of Discipleship, Regis Nicoll writes that his interest was piqued by the book’s opening line:  "Cheap grace is the deadly enemy of our Church." He continues by saying,

“In the following paragraphs I learned that ‘cheap grace’ was ‘Christianity without discipleship’—which, more plainly stated, is forgiveness without repentance, salvation without sanctification, deliverance from the judgment of sin without the desire to be delivered from the habit of sin. It hit uncomfortably home.

Standing opposed to the Christ-less religion of cheap grace, was ‘costly grace.’ Costly grace is Christ-filled Christianity established on the Cross of redemption and the Yoke of discipleship. It is not a one-time spiritual experience, 12-step recovery program, or endless flurry of church activities, but the life-long process of taking up our cross and putting on His yoke. My settled beliefs began unraveling.”

In Part 2 of his series, Nicoll explores Bonhoeffer’s time living in Nazi Germany:

“As the country was in thrall to its Fuhrer, Bonhoeffer criticized what its nationalistic zeal had produced: An absolute Leader bestowed with unlimited power and answerable to no higher authority, as opposed to the true leader who ‘sees that his office is a penultimate authority… in the face of [the ultimate] authority of God.’"

“Two things struck me and stayed with me after I finished the book. First, Bonhoeffer saw much earlier than many others the evil that was in Adolph Hitler. Bonhoeffer saw it. He saw it when others didn’t. That vision led him away from the ‘German Christian’ movement that made peace with the Nazis. It led him to take his stand with the ‘Confessing Church’ that would not compromise with Hitler and his minions. Some of Bonhoeffer’s friends couldn’t or wouldn’t see what he saw. For some the price of seeing was too great.

Second, I was struck again and again by Bonhoeffer’s emphasis that to be a follower of Christ means acting responsibly even when you cannot predict the outcome. The Christian cannot retreat from the struggles of the world. His faith must lead to action even when he cannot see what comes next. When Bonhoeffer returned from the USA to Germany in 1939, he saw it as an act of obedience to God. His place was in Germany with his own people even if that meant suffering and death for him.”

Living as a spy in Germany did, of course, result in suffering and death for Bonhoeffer. But his legacy remains for all Christians to study and learn from, whether in times of war or times of peace.