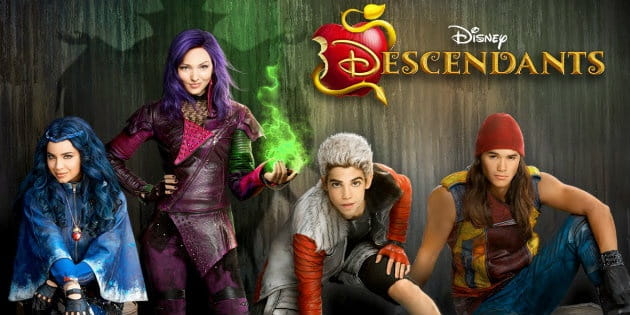 As I’m sure most of you have realized by now, I’m a huge dork for Disney. I love the imagination, the stories, and the sense of nostalgia Disney inspires in its audience. So naturally I was curious when the studio announced the release of Descendants, a TV movie about the teenaged children of Disney villains. For the most part, the film was a corny adventure about bad teenagers finding redemption, but if you look past the musical numbers, Descendants actually has a lot more to offer. Christian viewers could learn a lot from this movie, starting with…

Sometimes the “Bad” Aren’t as Bad as We Think

From the start of Descendants, it’s clear that Mal, Jay, Carlos, and Evie all have their faults. They’re liars, thieves, bullies, pretty much everything you’d expect in your typical villain. Except they’re not villains. In fact, a closer look reveals these kids actually have a lot of good qualities: Mal is a natural leader, Evie is hardworking and intelligent, while Jay and Carlos are both fiercely loyal to their friends. Despite everyone trying to peg them as evil, the truth is the four are just normal kids.

C.S. Lewis warned Christians about making people out to be worse than they really are. It’s a practice that will “make us into devils” and fix us forever in “a universe of pure hatred”. Instead of looking for the worst in our enemies, Christians should remember that God has commanded us to love our enemies (Matthew 5:44). This becomes even more important when you realize…

Sometimes We’re Not as “Good” as We Believe

You’d think a school attended by the children of Disney royalty would be a fun place to visit, but as it turns out, not all the students inherited their parent’s heroic qualities. Chad, Cinderella’s son, tricks girls into doing his homework by using his charm and good looks. Audrey, the daughter of Sleeping Beauty, is condescending and vain. Even the Fairy Godmother’s child turns on her friends for a chance to be popular. Yet, despite all of this, they still see themselves as the good guys!

In the same way, Christians aren’t always as “good” as we’d like to think we are. Very often we come across as proud, angry, judgmental, self-righteous, and completely unlike Christ. Jesus warned his followers not to go around judging people without doing some intense soul-searching first (Matthew 7), and even then, being a Christian means you’re forgiven, not perfect. It’s a hard lesson, but one we desperately need to remember, especially considering…

First, a little backstory. Descendants opens with Belle and Beasts son, Prince Ben, issuing a proclamation to release the four teenagers from their lifelong imprisonment. He believes the children of villains should be given a chance to live alongside the inhabitance of all the enchanted realms. How do Mal, Jay, Evie, and Carlos repay this kind gesture? By plotting to overthrow Ben and destroy his kingdom.

As you might expect, the four teenagers eventually come around to the side of good, but not before making a few mistakes along the way. In a similar fashion, God’s grace shouldn’t be treated like a one-time “Get Out of Jail Free” card. People are going to stumble on their journey to Jesus, and Christians need to show them forgiveness no matter how often they mess up (Matthew 18: 21-22). After all, if grace teaches us anything it’s…

Don’t be Defined by Who You Were

In a way, we’re all a bit like Mal and the other descendants. Perhaps you’ve been overwhelmed by fear like Carlos, or maybe you’ve put too much value on your physical beauty like Evie. We all struggle to move past our failures and make something meaningful out of our lives. The wonderful moral of Descendants (and coincidentally, the Gospel) is that you don’t have to be defined by your past mistakes. It’s a beautiful message of hope every Christian is constantly re-learning.

Each time we look at the cross, we’re reminded that Jesus freed us from our sin. As the Bible teaches, once we have accepted Christ we are a new creation, “The old has gone, the new has come!” (2 Corinthians 5:17). Our lives can now reflect the spirit of our Heavenly Father, which leads us to our final point…

Parents, Your Children are Watching

Ironically, the most important lesson in Descendants isn’t for children, but for adults. Viewers get a brief look at the four infamous parents (Maleficent, Jafar, Evil Queen, and Cruella De Vil) and it’s pretty clear they’ve done a poor job raising their kids. The Evil Queen teaches her daughter that beauty is everything, Jafar encourages his son to steal, and Cruella has convinced Carlos that dogs are savage pack animals! Instead of fostering their children’s natural gifts, the four villains try to mold them in their own image. They even exploit the teen’s newfound liberty to further their own agendas.

Parents, there are no words to express how much of an impact you have on your children. Every action, every word, will shape your son or daughter into the person they become. For Christians, this means leaning to balance biblical principles with your child’s independence. It means pointing toward Christ while still allowing them to make their own way. So be careful of how you speak to you sons and daughters, because trust me, even when it feels like they never listen, they do!

What did you think of Disney’s Descendants? What are some lessons your family learned from the movie?