Is the Declaration of Independence Christian? Does it Matter?

Is the Declaration of Independence Christian? Does it Matter? 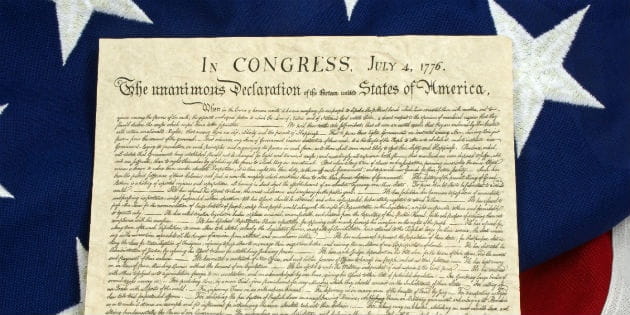 Every year on our nation’s Independence Day, I think back to the start of it all. I think back on my high school history classes and remember what I learned about the documents that set the tone for this new country, with its new freedoms, new ideas, new laws, and new systems.

As a Christian, I also think about how faith played into the foundation of our nation, and wonder about what the founding fathers both believed and intended for America as it grew.

Joe Carter asks a similar question in a recent article for The Gospel Coalition: “Is the Declaration of Independence a ‘Christian’ Document?”

In the early paragraphs of the Declaration of Independence comes this key line many of us know by heart: “We hold these truths to be self-evident, that all men are created equal, that they are endowed by their Creator with certain unalienable Rights, that among these are Life, Liberty and the pursuit of Happiness.”

That one line is at the heart of many heated debates in our country today. Are those words literally true? Were they intended to be? Why were they included in this important document? What did the Founding Fathers mean by them?

“The idea behind this claim is that most self-identified social conservatives, especially those who are Christian, literally believe: that men and women were divinely created; that they have equal dignity; that rights are given by a personal God; that the right to “Life”—from conception to natural death—is an irrevocable gift to all humanity; that the right to “Liberty” comes with corresponding duties; and that the “pursuit of Happiness” is the means to seek human flourishing, a teleological end to liberty that is ordained, ordered, and constrained in purpose by God,” says Carter.

This brings up a good question though: were the Founding Fathers Christians? Or were they Deists of another kind?

“In his book The Religious Beliefs of America's Founders, Gregg L. Frazer says, ‘The Declaration is an honest expression of the political theology undergirding the American experiment—theistic rationalism.’ He adds, ‘Understanding that the authors were theistic rationalists could resolve the age-old debate over the language of the Declaration.’

Carter argues that Frazer’s research concludes the Declaration of Independence was not a truly Christian document, but instead one written by theistic rationalists. “They wrote in a way that would appeal not only to other theistic rationalists,” Carter says, “but also to Christians and deists.”

So were their words meant to be taken as literally true? From a Christian social conservative perspective, probably not.

What is literally true for us as Christians and Americans, then?

As Christians, our guiding truth should be Scripture, not any historical document like the Declaration of Independence. We should find our basis for our identity, our rights, and our freedoms in the Bible first and foremost. It is through reading God’s Word that the Holy Spirit can and will reveal to us what is true.

We should be unafraid to claim and declare what is true as believers, but doing so might mean we have to first shift our perspective from what we once believed (such as a literally true Declaration of Independence in regards to the rights of Americans).

“The ‘original intent’ of the authors shouldn’t necessarily be our guide,” says Carter. “If it really is a truth—and a ‘self-evident’ one—it is only because it was revealed to us by Jesus Christ.”

As we celebrate our freedoms as Americans around this Independence Day, may we also celebrate the many eternal freedoms we have through Jesus and cling to the truth of his word. As Galatians 5:1 says, “It is for freedom that Christ has set us free.”