Why Do So Many Women Show Off Cleavage in Church?

Why Do So Many Women Show Off Cleavage in Church? 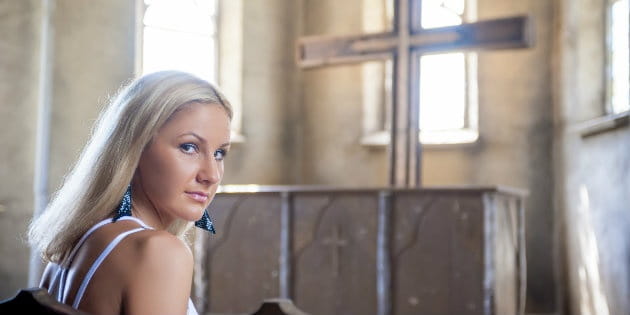 My wife brought up the topic as we drove by cornfields on the way home from church. “You just can’t wear something like that on stage.”

I knew exactly what she meant. During the worship set, one of the praise leaders wore a dress that covered about as much skin as a tight-fitting, low-cut swimsuit with a short skirt. Remembering the lessons from Every Young Man’s Battle, I’d locked my eyes on the praise lyrics or simply closed them so that I couldn’t see her.

“When you dress like that,” my wife added, “you take the focus off God and put it on you. You’re undermining the whole reason we’re there.”

In a trending article from CharismaMag.com, Jennifer LeClaire suggests that this issue of revealing clothing in church is troubling:

Some women—and I am talking about so-called "mature believers," not lost souls or baby Christians—come into God’s sanctuary on Sunday morning wearing clothes you might rather expect to see them wearing at a dance club on Saturday night. Their blouses cling to their bodies, their necklines dip so low and stretch so wide that they reveal cleavage, and the slits up the sides of their skirts offer more than an innocent glimpse of their thighs. Again, I’m not talking about sinners seeking God or new believers who plain don’t know better. I’m talking about those who claim to be "born-again, baptized, blood-bought" (even tongue-talking) members of the church!

Paul instructed Timothy that women should “adorn themselves in modest apparel, with propriety and moderation” (1 Tim. 2:9), and he told the church at Corinth that “our unpresentable parts have greater modesty” (1 Cor. 12:23). Regardless of how hot it is outside or how busy we are, there’s no justification for Spirit-filled women to come to church wearing clothes that cause some men to pay more attention to the things of the flesh than the things of the Spirit.

However, other Christian women think that such a push toward modesty is rooted in shaming the female members of a congregation. Using such slogans as “modest is hottest” makes women feel as if they are the root cause of temptation, rather than teaching them how to view themselves as beautifully made in God’s image. Last year, Sharon Hodde Miller suggested three ways to tackle the problem:

How do we discuss modesty in a manner that celebrates the female body without objectifying women, and still exhorts women to purity? The first solution is to dispense with body-shaming language. Shame is great at behavior modification, even when the shaming is not overt. But shame-based language is not the rhetoric of Jesus. It is the rhetoric of his Enemy.

Second, we must affirm the value of the female body. The value or meaning of a woman's body is not the reason for modesty. Women's bodies are not inherently distracting or tempting. On the contrary, women's bodies glorify God. Dare I say that a woman's breasts, hips, bottom, and lips all proclaim the glory of the Lord! Each womanly part honors Him. He created the female body, and it is good.

Finally, language about modesty should focus not on hiding the female body but on understanding the body's created role. Immodesty is not the improper exposure of the body per se, but the improper orientation of the body. Men and women are urged to pursue a modesty by which our glory is minimized and God's is maximized. The body, the spirit and the mind all have a created role that is inherently God-centered. When we make ourselves central instead of God, we display the height of immodesty.

Miller makes an important point here. The church must do a better job teaching a “theology” of the body that isn’t rooted in shame. We are all designed by God and wonderfully made (Psalm 139:14). Everything God gave women was created “very good” (Genesis 1:31). But at the same time, our fallen nature has impacted the way we (especially men) see women’s bodies. The flesh nature gets in the way of what was once a perfect posture of purity toward each other. While we’re no longer slaves to our sin nature (Romans 6:6), that doesn’t mean our minds don't harbor impurity (Romans 13:14). Both men and women must live and dress in ways that humbly help each other in our weaknesses (Galatians 5:13).

In addition, we should also consider the motivations behind those who design such clothing. Are they making skin-baring outfits because they view women as God’s creation or are they doing so to exploit their bodies? This is something actress Jessica Rey tackles in a video on the history of the bikini:

The Godly Truth About Bikini's - FINALLY Someone Gets It! from sharethemessage on GodTube.

So, what about you? What are your thoughts on clothing choices for church?