Why More Churches Should Think about Serving Alcohol

Why More Churches Should Think about Serving Alcohol 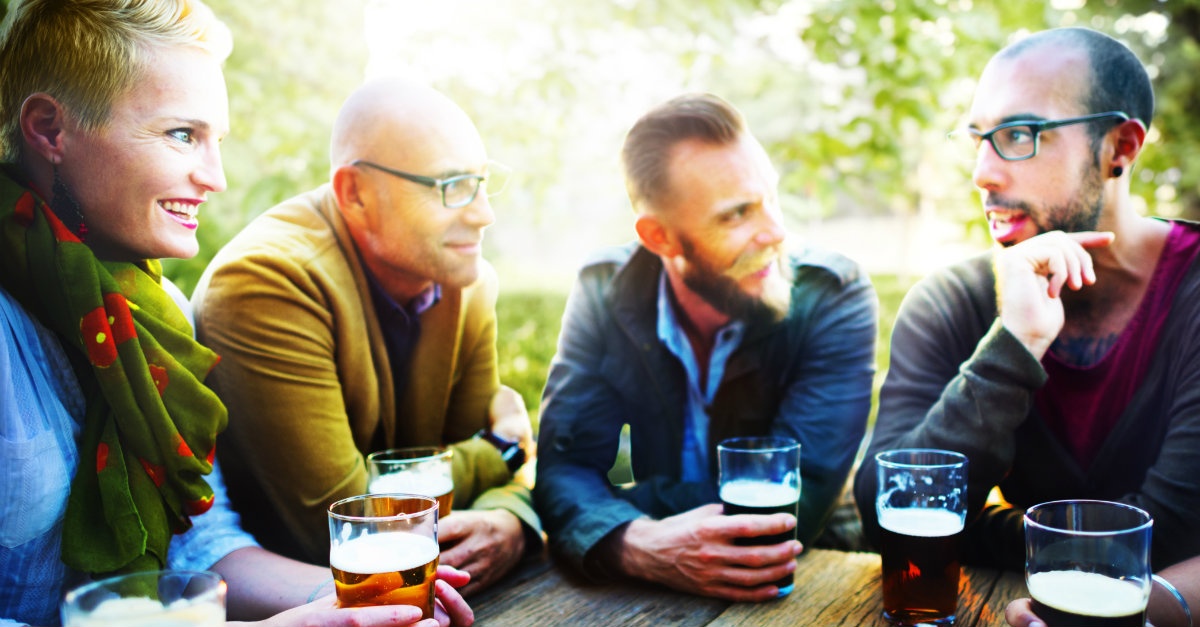 There is a photo from my wedding that shows two dear friends engrossed in conversation. They appear to be discussing something serious, and knowing their backgrounds as philosophy and religion majors, I always imagined them to be discussing apologetics.

They each have a beer in hand.

We know from history that some of the greatest Christian thinkers discussed religion over ales. C.S. Lewis and J.R.R. Tolkien used to gather at the Rabbit Room, the back room of The Eagle and Child pub, to talk about theology over drinks.

Many Christians have accepted the concept of alcohol in moderation. Though some still choose to abstain, Christians who enjoy the occasional beer or glass of wine are not uncommon.

That said, Christians who drink do not typically indulge on church premises.

In the Christianity Today piece “The Church that Drinks Together,” Kevin F. Foley says his church is considering otherwise. The author’s congregation is constructing a new church in Troutdale, Oregon, an unchurched town between beer-famous Portland and the winery town of Hood River.

Here, Foley says drinking is part of the culture. He explains:

“Portland is constantly being named and renamed America’s Number One Beer City. In Portland, breweries seem to outnumber gas stations. In 2014 Oregon produced 585,000 barrels of beer. Our state leads the U.S. in the percentage of dollars spent on craft beer.”

Wine production is just as important.

“Oregon wine grapes are now our most valuable fruit crop, valued at $128 million. Our state bottles about 3 million cases of wine annually, shipping 64 percent of it out of state."

Foley’s church has already decided that the new building will allow alcohol to be served in the fellowship hall. Otherwise, no one would rent the hall for weddings, and they need the bookings to pay the bills. Now they must decide if alcohol will be permitted in other parts of the church, specifically the building’s “café.”

Allowing alcohol in church may break down the walls between Christians and non-believers, Foley says. In an area that values quality alcohol, drinks can help bring the two groups together.

“Walls were broken down because of wine,” Foley writes. “My non-Christian friend is now more likely to visit our church because they know there are people there that enjoy wine, people who don’t demonize it.”

Foley acknowledges that scripture condemns drunkenness (Ephesians 5:18), but argues that church would be an appropriate place to practice moderation. He suggests wine-tasting and home-brew competitions, events that would engage the community and provide outreach through a shared interest in quality alcohol.

“I can guarantee that a public ‘Beer and Theology’ discussion will draw more people than a ‘Theology Discussion,’” Foley writes.

A church in Tulsa had a similar plan when they announced “Beer and Hymns Sunday.” The idea was to introduce the community to their church. The ChristianHeadlines.com news story became one of the site’s most popular articles of all time, attracting a variety of praise and criticism.

It cannot be denied that these churches have honorable intent. They are seeking to introduce the gospel to unreached people in a creative way. As Foley says, “...it’s about making people welcome and getting them to engage with the church and the God who loves them.”

Many Christians will find the suggestion to serve alcohol in church hard to digest, but ultimately Christians are not the group that these innovative churches are trying to reach. If it takes serving beer in the small group that leads a non-believer to Christ, it is worth swallowing our pride and taking a gulp of change.