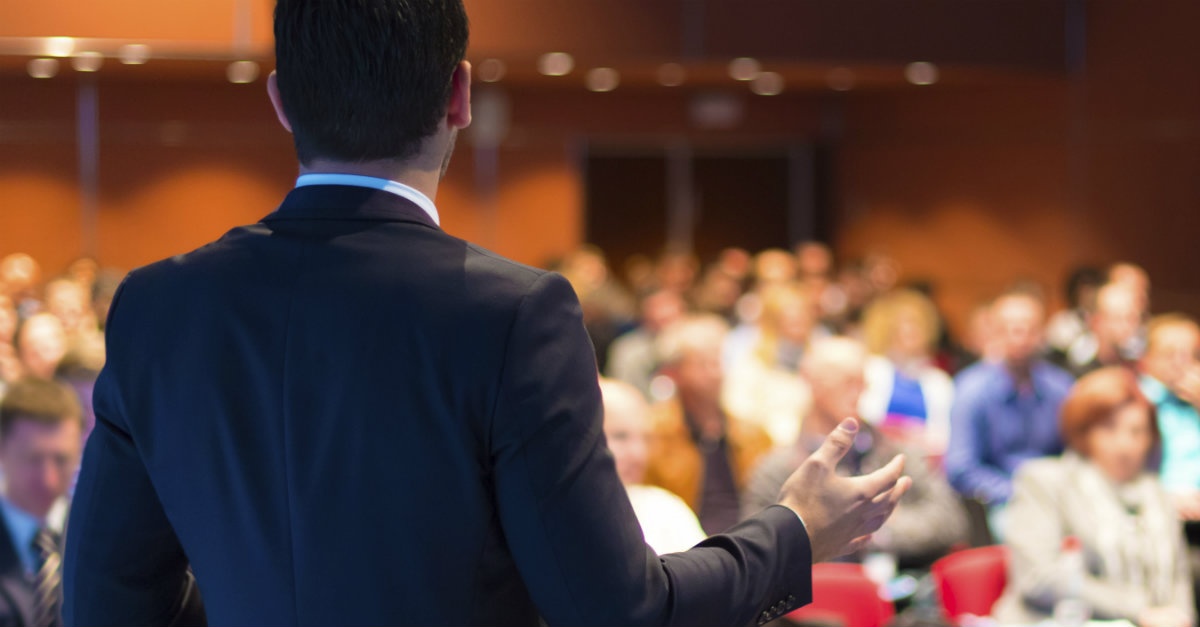 Many non-clergy are outstanding on their feet in front of large groups. Schoolteachers come to mind.  But the typical church member, even one who teaches a Sunday School class, is out of his element when suddenly asked to deliver a talk in front of the whole church.

Marlene said to me, “I’m sorry I took the entire service, Pastor. But the Lord was leading me.” Translation: She really got into her talk and couldn’t control it.  As a young pastor, I had invited church members to share testimonies in the morning worship service, something along the lines of 5-7 minutes. (Later, I learned to interview the individual and retain hold of the microphone the entire time!)

Since Marlene had not prepared adequately, once she got going, she couldn’t find a convenient stopping place. She kept on for a full 40 minutes.

Personally, I would not blame my failure to prepare on the Lord.

I see it happen all the time. It’s almost embarrassing.

A man is given five minutes to present something in a formal program. He gets up and speaks and speaks. Fifteen minutes later, he says, “They told me I had five minutes to do this. So, in the time I have left…”

His wife is trying to keep control on the second row. But she’d like to crawl under the pew.

One. Standing in front of the congregation makes one lose all sense of time.  I know it’s true because preachers deal with it all the time.

Two. Prepare. A speaker needs to plan carefully and fully two important things: what to say and what not to say. The second is as important as the first.

Three. Rehearse. Once they’ve planned their presentation, they need to practice it. Several times. In front of a mirror, while taking a walk, in the car.

Four. Ask for criticism. Once the plan has been made and has been rehearsed several times, the speaker should ask the spouse to be their audience.  “Honey, would you let me practice my talk?” Assuming he/she agrees, they should then add, “Please don’t interrupt me, but I’d love for you to write down any thoughts or suggestions and tell me at the end.”

Five. Pay attention. Do whatever your spouse says.  Iron-clad rule.  Do not argue.  If your spouse says, “That story doesn’t work,” then it doesn’t.  If they say something is unclear, it is. (This is really difficult since everything inside you wants to defend the good stuff you’ve written here.  Learn to stifle that. It’s your worst enemy.)

Six. Be sharp. Cut out all the preliminary talk. We have all heard someone rise to give a talk and begin, “When they asked me to do this, I began to think about what I might say...”   Such an opening is just verbal clutter, and should be treated like all other garbage and trash: taken out and thrown away.

Seven. No jokes unless you know what you’re doing. If you are going to tell a joke (or humorous story) in your presentation, try it out on several people ahead of time.  If even one is slow to get the point, omit it. Jokes can be great when done well, but no beginner is going to do this well, mark my word. It takes time and practice, and frankly, a few failures.  (Ask any humorist to tell you of the times when he/she told stories that bombed, or even back-fired.)

Eight. Brief is great. Your allotted time is going to  be a lot quicker than you would ever have thought.

Nine. Nervousness is normal. Knocking knees or nervous hands do not indicate that you should not be doing this.  Even the most experienced speakers are often beset by anxieties before their moment arrives.  (Most suggest you “channel” the nervousness, although I’ve never quite figured out what that means.)

Ten. Speak up. Speak slowly and clearly. Do not mumble. If you’re using the microphone, get with the person on the sound board ahead of time. Ask him/her for suggestions. Believe me, they have them!

Eleven. Focus. Here is a little secret I learned by accident in my very first sermon.  Sitting on the platform about to approach the pulpit to preach, I was almost overcome by nerves.  But, when I began to focus on the people and their need to hear what I had to share, the nerves disappeared.

Twelve. Use good grammar. That’s why planning is important, so you will know how to get your message across most effectively.

Thirteen. Never apologize. (In this context, that is.) We’ve all heard speakers walk up to the microphone and begin with, “Now, I’m not a public speaker…as you can probably tell…” (waiting for a laugh that doesn’t come.)  Don’t beat yourself up unnecessarily before your audience.

Never turn down an invitation to do some public speaking, unless it’s a forum not to your liking or a subject outside your area of knowledge.  As a new pastor in the New Orleans area, I turned down an invitation to be a last-minute fill-in for a television program in which several local citizens were discussing the pros and cons of homosexuality.  Even though I am opposed to this practice, the last thing I wanted was to be labeled as anti-gay, either by my church or those opposed to church. So, I sent my regrets.

If you fear public speaking, just know you have lots of company. But you will take a giant step of personal growth each time you accept the challenge.  Fear can be a monstrous master. Give it an inch and it’ll take a foot. The famous cartoonist Charles Schulz was afraid to fly. However, once a year, he took a short flight somewhere. “The nature of fear is such,” he said, “that if I give in to it, soon I’d be afraid to leave my room.”

As a follower of Jesus Christ, you have terrific assurances that “He will never leave thee nor forsake thee” (Hebrews 13:5-6), that you “can do all things through Christ who strengthens” you (Philippians 4:13), and “He has not given us the spirit of fear, but of power and of love and of a sound mind” (2 Timothy 1:7).

Oh, and there’s one more thing. Let’s make this…

Fourteen.  Afterwards, no autopsies. Stifle the urge to go back and analyze your every mistake. Do not ask people how you did. Do not put the standard of perfection on your talk. (If we pastors did that, we’d never get up to preach.)

Make it fun. Enjoy it. You can do this.