Are These 7 Sins Really Deadly?

Are These 7 Sins Really Deadly?

I’ve heard about the seven deadly sins but I’m wondering which sins they are. What are the 7 deadly sin and why are they more deadly than any other sin?   Sincerely, Jack

Answer:
Dear Jack, Many people wonder what the 7 deadly sins are and if they are worse than other sins. The early Roman Catholic Church taught that these sins could not be forgiven. However, according to the Bible, these seven deadly sins are completely forgivable by God.
The idea of the seven deadly sins isn’t new. The seven deadly sins have been around since early Christianity. The Roman Catholic Church came up with the list and declared that every possible sin was spawned from these seven. Personally, I would narrow it down and say that pride is the root of all sins.
These seven are often tied to Proverbs 6:16-19 where we find a list of the six things that God hates.
The only sin which cannot be forgiven is the sin of blaspheming the Holy Spirit. This occurs when the Holy Spirit tells an individual that he/she needs to accept Jesus Christ as their Lord and Savior. When that person says, “No, I don’t need him to forgive my sins,” he/she has called the Holy Spirit a liar which is the meaning of blaspheming the Holy Spirit. This is the unforgivable sin. God can forgive every sin except saying “no” to Jesus and his forgiveness of sin.
Let's take a look at each of the seven deadly sins in-depth and what the Bible says about them: 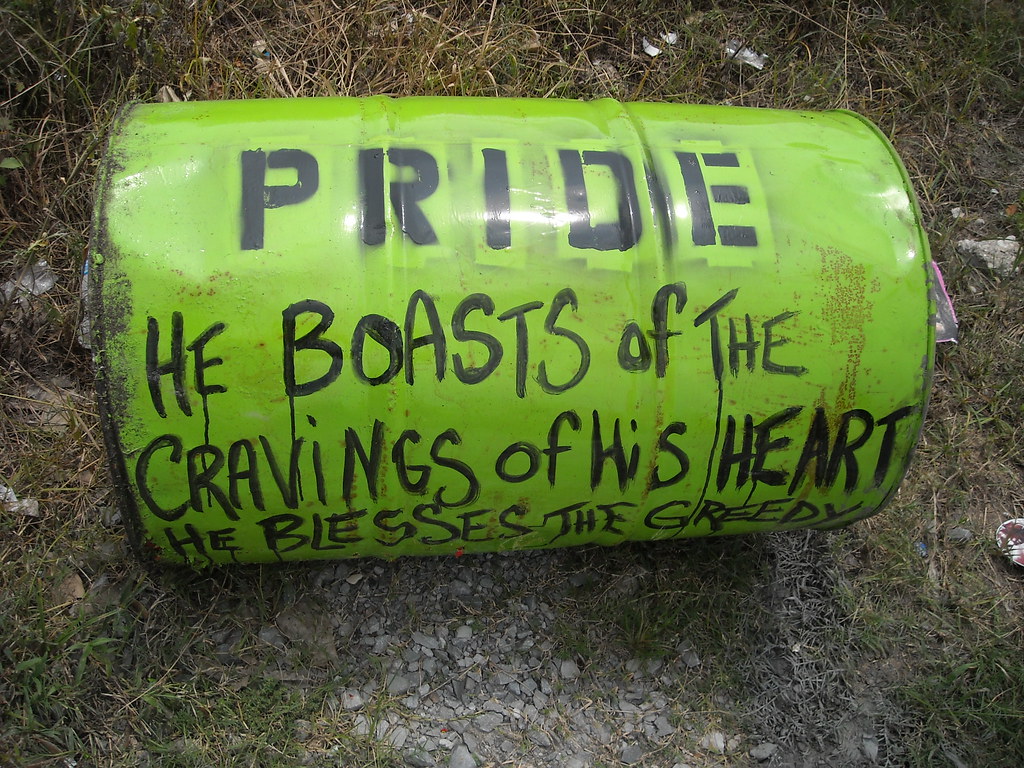 A loving mother once told me how proud she was of her son and the good choices that he was making. “What I want to know,” she asked, “is if it is okay to be proud of my son when the Bible says that pride is a sin?” “Of course you can tell your son how proud you are of him,” I said.
Pride is a two-edged sword. On the one hand, some people are all out front in a way that purposely calls attention to themselves and to their accomplishments. When they enter the front door, everyone else is backdoor. Pride says people, “I’m better than you.” Pride was Satan’s problem at the creation. He thought that he could be as good, if not better, than God himself.
It’s one thing to think too highly of yourself; it’s another thing to think too little of yourself. These self-deprecators are often gathered at the back door, reluctant to move out into life because they are afraid of what people may think of them. I call this the flip side of pride. It is a twisted over-concern with themselves.
Romans 12:3: “For by the grace given me I say to every one of you: Do not think of yourself more highly than you ought, but rather think of yourself with sober judgment, in accordance with the faith God has distributed to each of you.” Don’t think of yourself too lowly either. 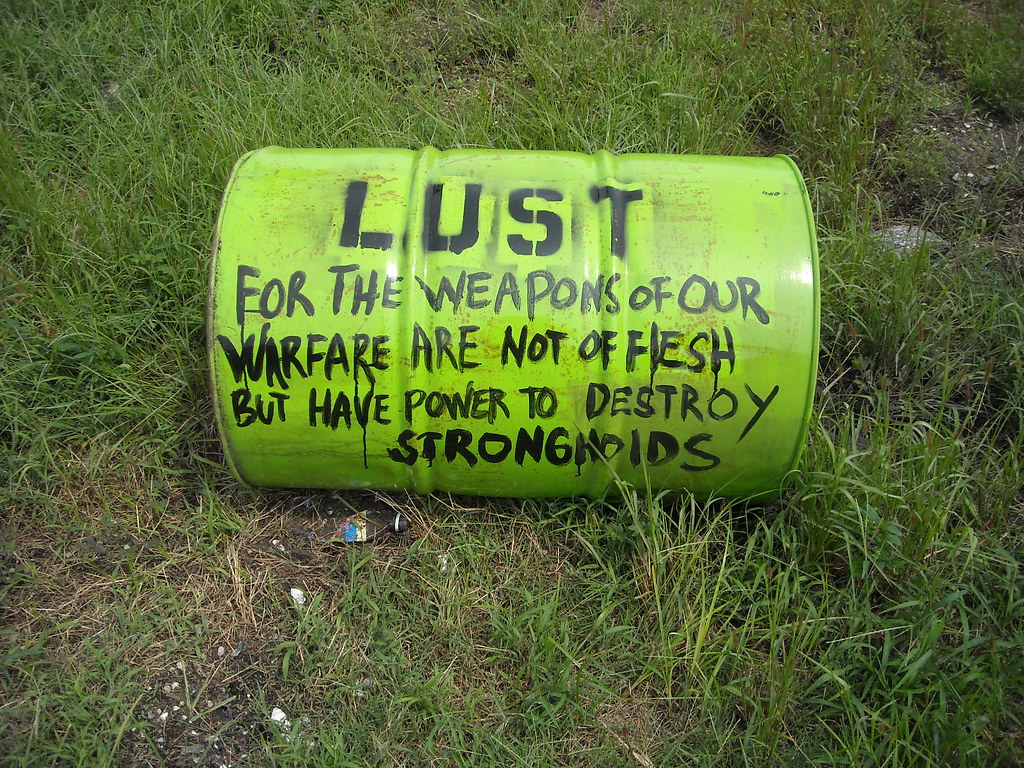 When we think of lust we think of sex. However, we all know that it’s possible to lust for things other than sex--like money, power, fame or control.
As a result, we might define lust as an over-craving, inappropriate, desire in any number of areas.
Of course, we naturally associate lust with sex. Most all of us will be tempted with lust at one time or another. Remember that it is not a sin to be tempted. The sin comes when we began to dwell on it. You have probably heard the old adage, “We cannot keep the birds flying over our heads, but we certainly can keep them from nesting in our hair. 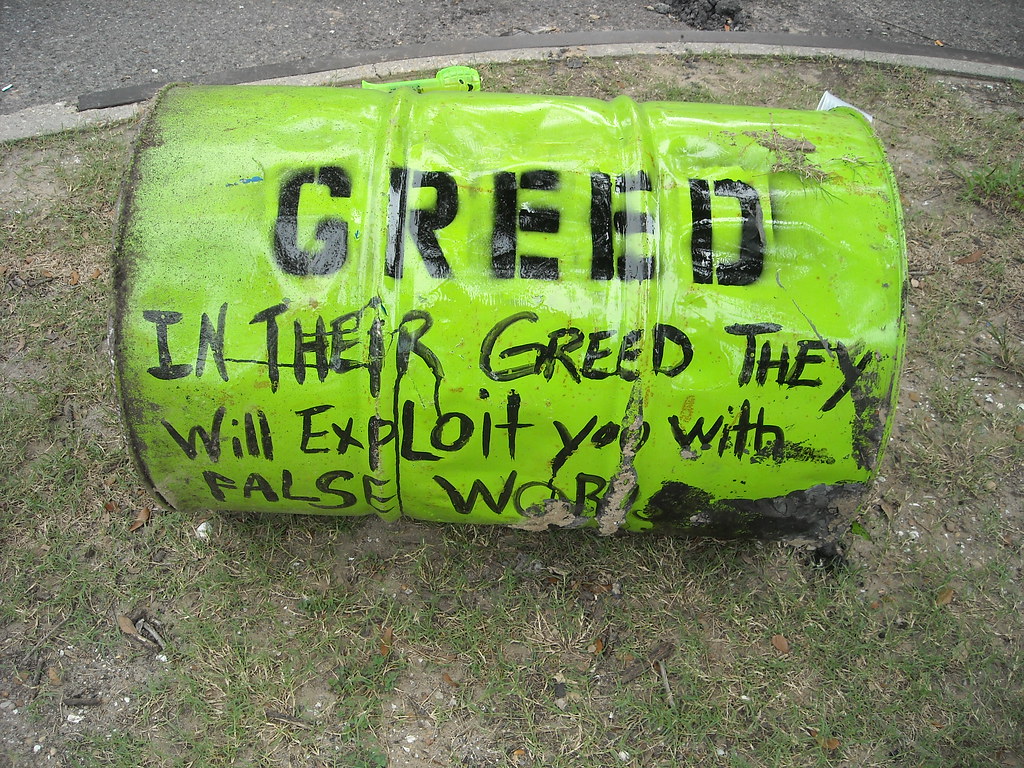 Greed is an overarching desire for material wealth or gain.
The saddest manifestation of greed is hoarding whereby an individual gathers material wealth that is never released to help people in need. 1 Timothy 6:9-10: “Those who want to get rich fall into temptation and a trap and into many foolish and harmful desires that plunge people into ruin and destruction. For the love of money is a root of all kinds of evil. Some people, eager for money, have wandered from the faith and pierced themselves with many griefs.”
“Pierced themselves,” are Greek words that describe roasting meat on a spit over an open fire. Paul says that the greedy are slowly roasted by the very things they consider so near and dear to their hearts. 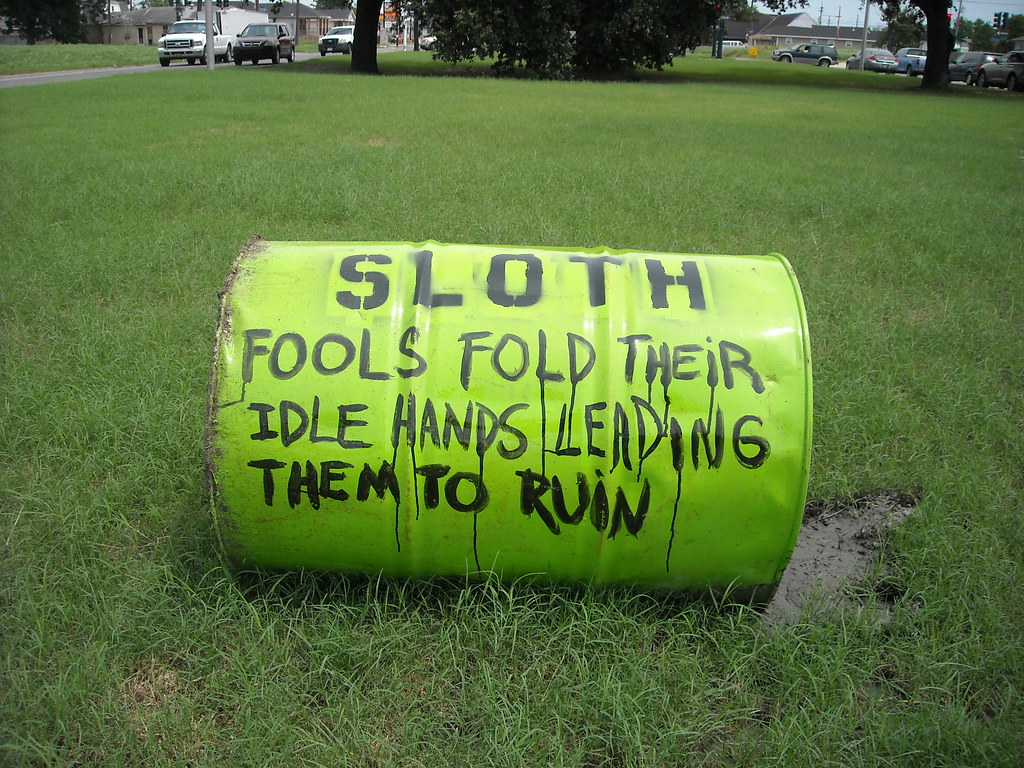 Sloth is excessive physical laziness or the failure to utilize one’s talents. Sloth is avoiding work.
Let me say a word to parents about lazy teenagers. Children are programmed to get up early— full of energy and ready to go. Teenagers, on the other hand, are programmed to sleep a little later. This has to do with energy.
It has always intrigued me that many school districts begin school early for teenagers and later for children. This is exactly the opposite of human behavior. In our culture, we have extended adolescence into the middle and late twenties. But in most cultures, females are considered ready for marriage when they began menstruation. Therefore, their bodies are programmed to save energy that’s needed for the baby. Colossians 4:5: “Walk in wisdom towards them that are without, redeeming the time because the days are evil (KJV). 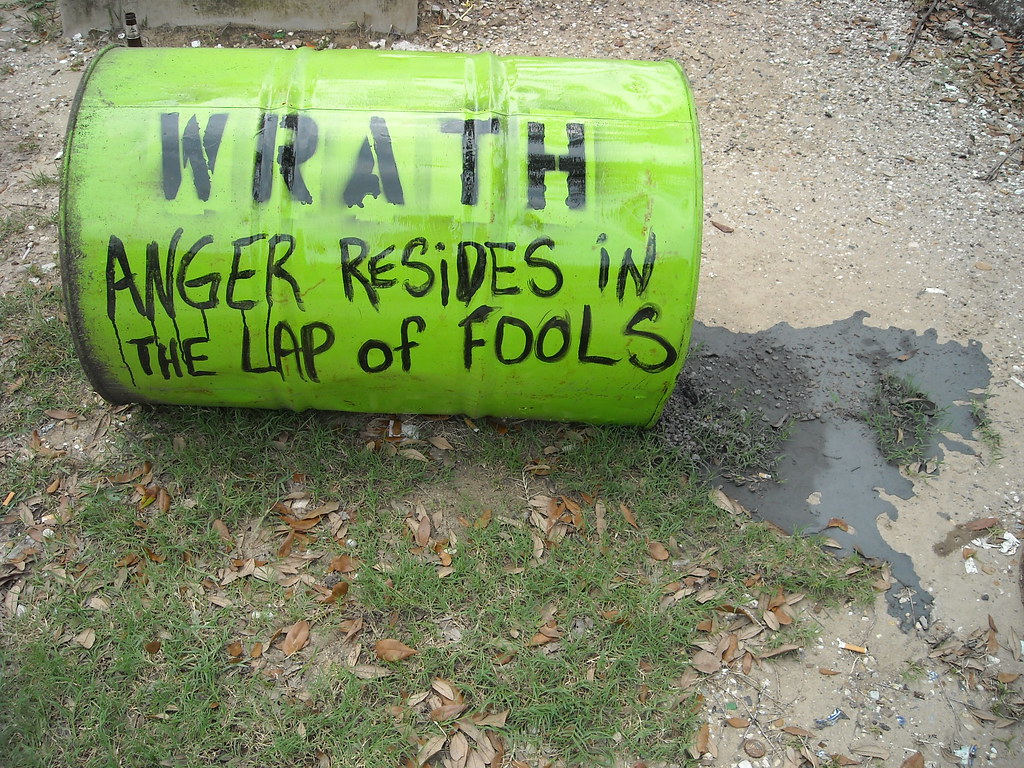 Wrath transcends anger. It’s possible to be angry and keep our feelings and emotions in line so that we may respond properly.
On the other hand, when anger degenerates to wrath our intentions turn to hurt and bringing pain to those who hurt us. While anger itself isn’t a sin, out of control anger and hate often lead to wrath which is a sin. When wrath begins to take over, we forget about forgiveness. “Dearly beloved, avenge not yourselves, ...for it is written, ‘Vengeance is mine; I will repay, says the Lord’”. (Romans 12:19). 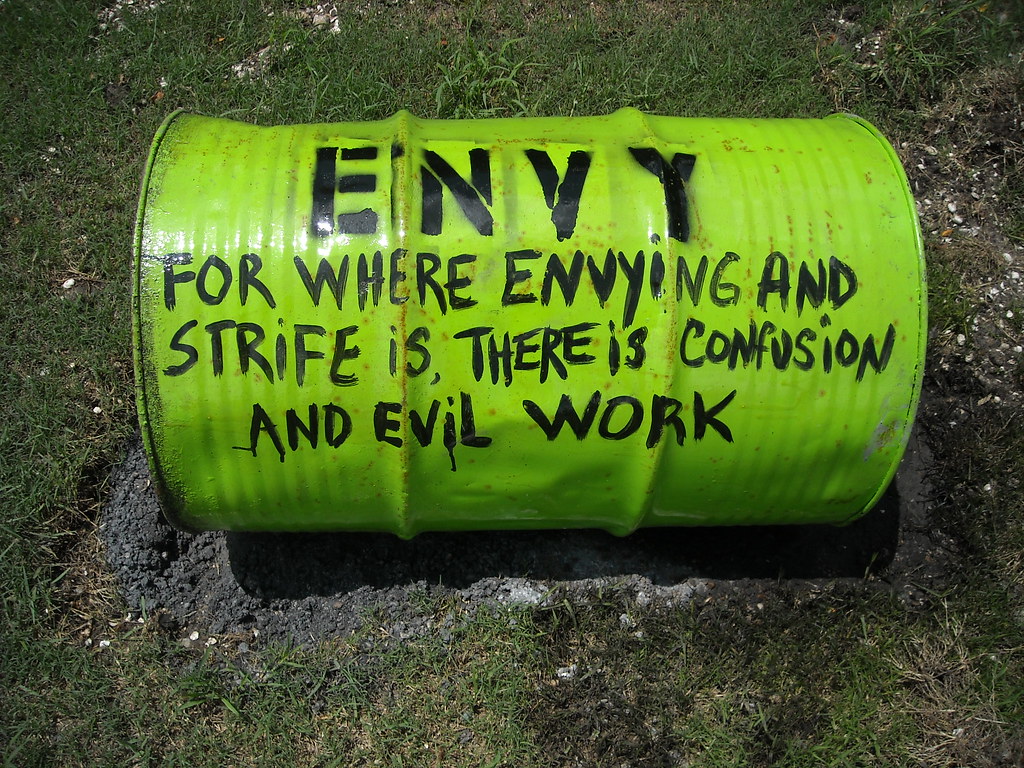 Jealousy wants what someone else hands. Envy wants them not to have it. Proverbs 14:30: “A heart at peace gives life to the body, but envy rots the bones.” 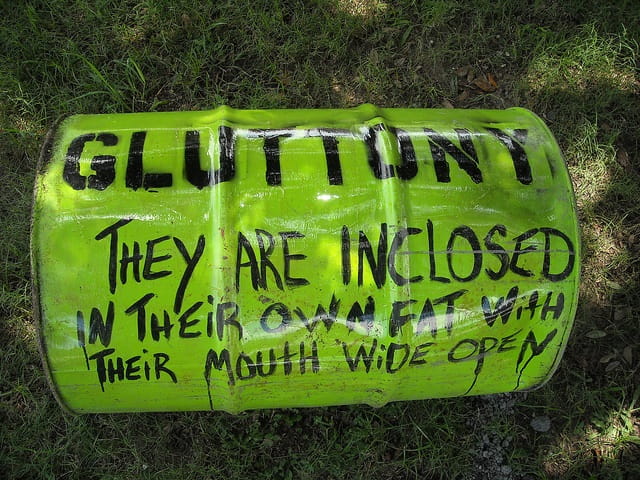 Gluttony is an inordinate desire to consume more than we need. Gluttony overindulges to the point that waste enters the picture.
We usually associate gluttony with overeating. However, gluttony can occur in many areas. Gluttony leads us to waste things needed by others. The operative words here are, “self-control.”
Proverbs 16:32: “Better a patient person than a warrior, one with self-control than one who takes a city.”
Proverbs 25:28: “Like a city whose walls are broken through is a person who lacks self-control.”
By the way, don’t miss the fact that of the seven deadly sins, gluttony is the only one that is a sin of the flesh. All the others are sins of the spirit.

What is the Cure for These Sins?

The cure for the seven sins is like the cure for any sin.
2 Corinthians 7:10: “Godly sorrow brings repentance that leads to salvation and leaves no regret, but worldly sorrow brings death.”
We confess to God that what we did was wrong and we repent by declaring that we’ve turned around and have no intention of continuing in that sin. Then we ask God for forgiveness, and fill our hearts with gratitude because he promises to forgive us fully.
1 John 1:9: “If we confess our sins, he is faithful and just and will forgive us our sins and purify us from all unrighteousness.” Let me close my thoughts with a favorite passage which describes how God cleans us up after we sin.
Ezekiel 36:26-27: "I will give you a new heart and put a new spirit within you; I will take the heart of stone out of your flesh and give you a heart of flesh. I will put My Spirit within you and cause you to walk in my statutes, and you will keep my judgments and do them.”
Love, Roger

This article is part of our larger resource library of terms important to the Christian faith. From heaven and hell to communion and baptism, we want to provide easy to read and understand articles that answer your questions about theological terms and their meaning.

What is Blasphemy and Why is it So Deadly?
What is Heresy?
The Fruit of the Spirit - What Are They?
10 Things to Know About Speaking in Tongues
What is the Tithe?
What is the Sabbath and is it Still Important?