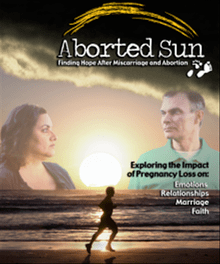 [Aborted Sun was re-released in January 2013 under the title, When Mourning Breaks]

Is it only women who struggle with the loss of a child? What role do men play? What role should the Church play? And is there hope for broken families trying to deal with the pain of miscarriage and abortion?

Lifestreams Media (Single Creek) poses answers to these questions in Aborted Sun. This documentary discusses the struggles of losing a child to miscarriage or abortion. The majority of the film seeks to tell the stories of individuals dealing with this issue. The final portion of the film is the most important part, however. It sends several clear messages to women, to men, and to the church.

Aborted Sun offers hope to women through the grace and healing of Jesus Christ. One woman interviewed shares her firm conviction that true, complete healing from an abortion is impossible apart from Christ. “We weren’t made to kill our babies,” she says, and believes that while we live apart from the design of our Creator, we can never fully mend from that massive wound. However, the filmmakers make it a priority to show that Christ forgives and offers healing.

“I realized God was not going to hold my abortions against me,” said one interviewed woman. “I just needed to accept it.”

Chris Lang, director of Aborted Sun, survived a miscarriage and a near abortion while in the womb. In this documentary he brings a very personal conviction to the “women’s” issues of abortion and miscarriage. First, he brings awareness to the fact that men are greatly affected by this issue. Many men (husbands, fathers) voice their hurt, confusion, and suffering throughout this documentary. Many people never think twice about how a would-be-father is affected by a miscarriage or an abortion. However, Aborted Sun answers that question: they do suffer, in a very real way.

The film also presents a challenge to men, however. Men need to be involved in the healing process of their wives and family members who experience post-abortion and post-miscarriage trauma, even if they are not the father of the baby. God is healing and will heal these women, the film makes evident. Will their husbands continue to be part of the problem? Or will they allow themselves to be part of the healing?

Aborted Sun sends several unmistakable messages to the Church - the body of Christ - and to the institutional Church.

To Christians everywhere it reveals that women who have had abortions experience just as much hurt as women who have miscarried. That “elective abortions” often aren’t elective. Young, pregnant girls experience immense pressure from families, peers and boyfriends to have abortions. These girls are often not of the legal age to marry, smoke, drink, go to war, vote, or spend time in adult prison. Yet the immense responsibility of choosing an abortion is placed before them. Then, when they cave in to pressure, we brand them for it.

There is an obvious problem with that.

The filmmakers also speak bluntly to the institutional Church. Does the Church not claim to be “a hospital for the broken”? Then it should act like one. Very often women who have had abortions experience a message of condemnation from the pulpit; they feel shame and regret and judged. As one of the interviewed women in the film said, if the Church spoke “a balanced message of justice and mercy” then people would learn to better deal with the issue. Perhaps unknowing parishioners would have more sensitivity toward the women sitting around them who have suffered through the mistake of choosing an abortion.

Additionally, the families interviewed in this documentary were very vocal about the void in churches where there could (and should) be ministries and support groups for such women. There is a need, there is pain. It is estimated that one fourth of the women inside of any given church have had an abortion. But because it’s such a controversial and taboo topic, many churches have shied away from offering specific support to them. Church: be that lifeline, Aborted Sun begs. Assign a leader to be on-call for women who need prayer and support in their grieving process. Offer memorial services to couples who lose children due to miscarriages to help them cope. Be that hospital for the broken.

The overarching message of Aborted Sun is that hope is available to everyone, God’s grace extends through every poor decision, and healing is possible. The “end” of many stories have yet to be written.

Aborted Sun shows many couples deciding to write “ends” to their painful stories. The couple shown in the documentary who had been struggling through their three miscarriages decided to plant three trees in honor of their children. That small act helped them find closure; it helped their relationship to heal. One woman wrote a letter to her baby. Another started a memorial to aborted babies everywhere, which is regularly visited by many women.

This young woman said that God “Psalms 30:11,” and believes the same is possible for all women who call on the grace and love of Jesus Christ.

Lifestreams Media was founded by Chris Lang (director of Aborted Sun). We at Lifestreams believe that storytelling has the potential to change the world. After all, Jesus Himself never spoke publicly without telling stories (Matthew 13:34). For this reason, Lifestreams Media began producing documentary films in 2010 and released our first film, Single Creek, to television and DVD in 2011. A new film RE: Miracles, is projected for release in 2012.

Debbie Wright is Assistant Editor for Family Content on Crosswalk.com

Recently On Movies at Home