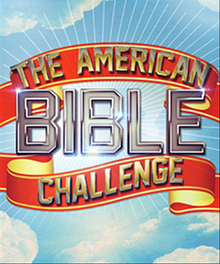 I was skeptical. A game show about the Bible... would it work? Is the cultural climate right? Would any kind of Christianity be allowed to shine through, or would it be pushed aside in favor of the safe and bland?

While it remains to be seen whether the show catches on and how the culture reacts, let there be no mistaking: The American Bible Challenge (premiere episode Thursday, August 23 on GSN) is a Christian program on secular television, one that is all at once entertaining, inspiring, and educational.

Hour-long game shows are, outside of reality TV programs like Survivor, certainly not the norm. This one, however, has a very particular reason for a longer run time: contestant testimonies. In The American Bible Challenge, three groups of three players each are competing to win money, not for themselves, but for a charity or ministry. For example, in the premiere, "The Gospel Geezers" are playing for Operation Christmas Child of Samaritan's Purse Ministries; "The Suburban Saints," led by a Purple Heart-earning Iraq veteran, hope to bring home the $20,000 winner's prize for City Crossroads of San Francisco; and a group of three women calling themselves "Minnie's Food Pantry" are playing for the feeding center they themselves started. In pre-taped segments, these contestants are allowed to share the true stories of their coming to Christ and what the Lord has called them to. This is no truncated Pat Sajak-esque "Where are you from and what do you do?" introduction.

Comedian Jeff Foxworthy (Are You Smarter Than a Fifth Grader?) is the host, and does a commendable job putting contestants at ease, contributing follow-up nuggets to questions, and making the show about the Bible and the charities - not necessarily an easy thing to do for someone more used to the spotlight (see Foxworthy share about his faith here).

While Foxworthy may bear a mild resemblace to Ned Flanders of The Simpsons, the questions in The American Bible Challenge aren't anywhere near as frustratingly difficult as the "Bombardment of Bible Trivia" game Ned once played with the Simpson children. You will find no Serpent of Rehoboam, Well of Zohassadar, or Bridal Feast of Beth-Chadruharazzeb here. In fact, prior to the final round, there was only one question I missed. But since in some rounds teams have to beat their opponents to the buzzer, and the final round is a genuine Family Feud-style hot seat, the early-round ease of questions works just fine, especially because the show will not alienate children or those who don't have degrees in Bible scholarship.

The categories and questions reminded me much of the long-ago days when it was my job to create Bible quizzes for our sites. Just as we tried to do then, the show adds humor by making one of four multiple choice answers a silly one (e.g. God giving "the pinky swear" as the sign that he would never again flood the Earth). And the segment where contestants have to determine whether a particular quote is from "The Word of the Lord" or "The Lord of the Rings" was a dead ringer for our "Shakespeare or Solomon?" quiz. The team coming up with the trivia for The American Bible Challenge has certainly done their homework about what constitutes a clever Bible quiz.

In addition to the contestant testimonies, another inspired segment of the show is the 10 minutes of "Bible study" each of the two teams squaring off in the finals are given to prepare. The teams go into separate rooms with a Bible and a whiteboard to brainstorm about the final topic (in this case, "Women in the Bible") before returning to the stage. We see them praying, flipping through passages, and devising strategies, which turns out to be much more interesting than it sounds.

The American Bible Challenge also plays smartly to today's internet generation, with nods to viral video and social networking (compare the show's "Faithbook" segment to something we put together at Crosswalk). If the producers can continue finding videos that work just as splendidly for their "Kids Sayeth the Cutest Things" segment, they'll truly have a winner of a game show indeed.

So what doesn't work? Very little. The gospel-style American Bible Challenge Choir (yes, they're on stage, too) that sings us into and out of commercial breaks feels a bit like self-parody. I'll be surprised if the choir lasts as long as the show does. As for the rest of it? Well, if you haven't gotten the point yet that this is the ideal television show for the Crosswalk audience from all the parallels I've listed between our site and the show, I'm not sure how much more obvious I can be. It's family-friendly fun for charity, for biblical literacy, and Christian testimony, with humor and knowledge for all. What's not to like?

Want to get warmed up for the show's arrival? Check out our archive of Bible Quizzes and Bible Trivia! And stop back for our interview with Jeff Foxworthy posting August 22.

Shawn McEvoy is the Managing Editor of Crosswalk.com.