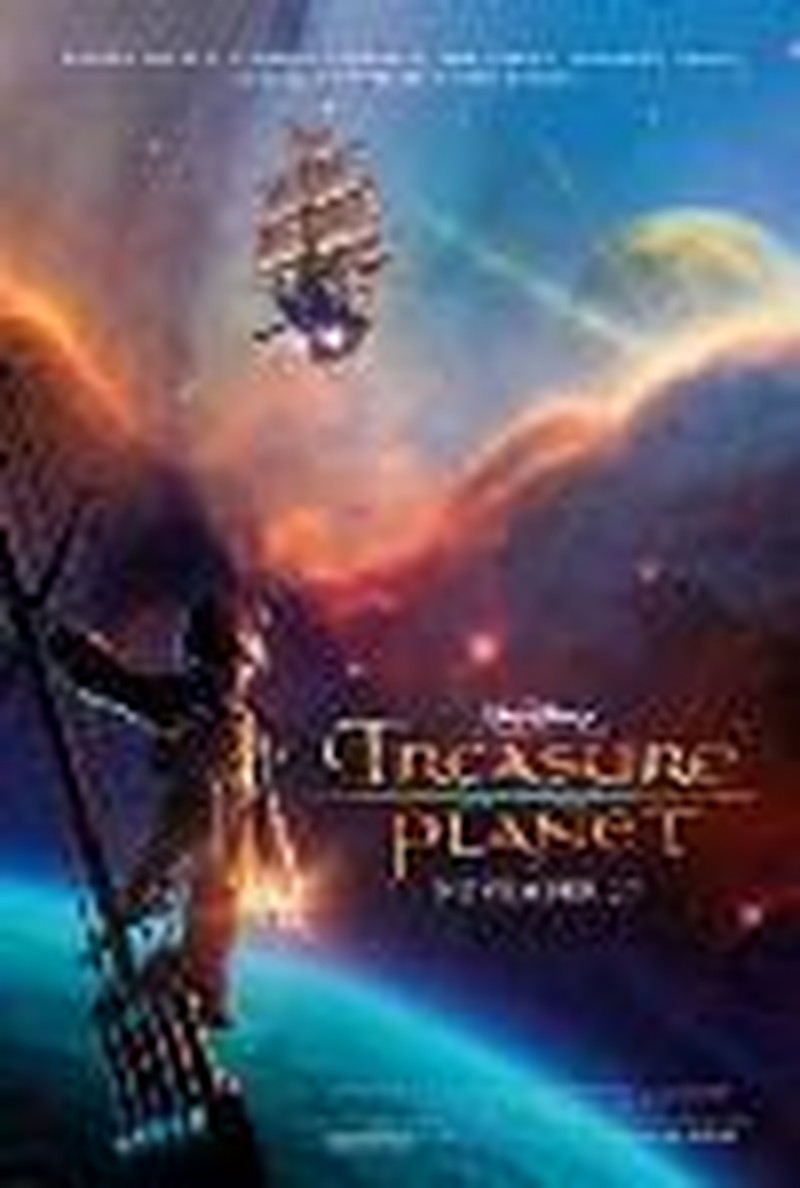 Special Notes: If you want the most bang for your buck see this animated adventure in an IMAX theater (it's a simultaneous theater/IMAX release) and enjoy the special colors and effects even more.

Plot: This latest animation adventure from Disney is based on Robert Louis Stevenson's "Treasure Island". In this version, fifteen-year-old Jim Hawkins (voiced by Gordon-Levitt) has been raised without a father by his hardworking single mom Sarah (voice of Metcalf) and is restless to see the world and search for a special treasure that's rumored to exist.  When Jim lucks on a special golden orb that holds the map to the legendary "loot of a thousand worlds", he leaves home in a solar space galleon with hopes of finding the treasure.  Befriended by the ship's charismatic cyborg (part man, part machine) cook Long John Silver (voice of Murray), Jim blossoms under his guidance and begins to grow out of his teenage childishness and act more responsibly like a young man who's purposed on finding the treasure. One day the alien crew gets restless and commits mutiny in order to look for the treasure on their own. As the crew tries to kill Jim and his friends, the ships Captain (voice of Thompson) and his faithful friend Doctor Delbert Doppler (voice of Hyde Pierce), the three barely escape and land on an abandoned planet where they discover a machine named B.E.N. (Bio-Electronic-Navigator voiced by Martin Short) who helps Jim with a plan to thwart the pirates and find the treasure.

Good: From the creators of such classics as "The Little Mermaid" and "Aladdin", this Disney adventure is colorful, fun and a surprising escape for both kids and adults alike. I was impressed with the details of the port city (which looked like a scene out of "Star Wars") and the beautiful colors and creative touches used in the animation. The flight scenes are also spectacular with hair blowing in the gravity free environment (I couldn't figure that one out) of the space-age style ship as well as surfboard style devices gliding through the air and onto planets. There are several characters that made this movie work; Long John Silver's tiny pet "Morph" who changes into just about everything it comes in contact with, Dr. Doppler who provides some romantic comic relief with the Captain, and Short's hilarious robot who had me laughing so loud kids were staring at me -- he's worth the price of admission alone.  James Newton Howard's score is thrilling and perfect for this modern day adventure with John Rzeznik (of the Goo Goo Dolls) performing a particularly moving song during a scene that shows flashbacks of Jim's dad leaving him as a boy - it is a moving and touching scene.  I enjoyed this movie and although I wouldn't call it kiddie-friendly, it definitely has enough adventure and excitement to capture the attention of older kids and adults.

Bad:  There are some ugly creatures (and I mean ugly!) who try and kill Jim in a few intense life and death scenes. Even though the creatures are overly done as alien bad guys, there are still a few who are disgusting and menacing looking (one can remove his head and become tow creatures), especially a scary spider named Scroop who is responsible for the death of one of the shipmates (he floats into space alive). Some crude humor and colorful phrases are used, along with varying degrees of bad attitudes from Jim and the mutinous crew. There's also a scene that touches on the fact that Jim grew up without a father and he misses him (a brief scene shows a tearful flashback of Jim's father walking out on him as a boy). The violence consists of a few fight scene and ships firing on each other as well as a couple of creepy characters trying to kill Jim and his friends. These scenes might be intense or frightening to younger kids but that depends on their age and maturity level. And for kids of divorce (or those who have had a parent abandon them when they were little) the scene where Jim reflects back on his father leaving him as a boy, is a very touching and moving scene that might possibly remind kids of their own situation, so parents should be sensitive to that scene and may need to explain it to your kids afterwards.

Bottom Line: This is the time of year when family films are a big holiday treat to entertain kids, family and relatives.  Disney is banking on this animated adventure to fill that need and provide something entertaining and different for the family. While I enjoyed the movie and liked the fact that an old classic was remade into a modern sort of "pirate tale" for kids, this one still has a few scenes that prevent it from being kiddie- friendly and place it more in the older kids (age 6 or 7)  to adult category. There were lots of little ones around me that seemed to enjoy it just fine but there also a few who were clinging to mom and dad when certain scenes popped up, so parents of little ones, use your discernment on what your pre-school child can or cannot handle. I took my grown daughter to see this with me and we both laughed and enjoyed the whole movie, especially the scenes with Martin Short's hilarious character.