Everything You Should Know about John Newton's "Amazing Grace"

Everything You Should Know about John Newton's "Amazing Grace"

John Newton’s “Amazing Grace” has become one of the most powerful and well-known hymns in the world created from a personal testament to his own story of falling into grace. He wrote “Amazing Grace” at a time when he had rediscovered faith in God and meant the lyrics as a true confession of the amazing grace he experienced. Millions of people would go on (and continue) to hear Newton’s powerful words of redemption and find a similar feeling within themselves. “Amazing Grace” is a beautiful example of the redeeming essence of God’s love, that while even in the darkest of times we can find grace and inspire others. Discover more about John’s life and the meaning of the hymn’s lyrics below!

John Newton was born in 1725 in London to a Puritan mother who died soon before his seventh birthday, and a strict sea-captain father who brought him to the seas at age 11. After many excursions and a rash youth of drinking, Newton was selected into the British navy. After trying to desert, he endured eight dozen lashes and was demoted to the rank of common seaman.

John was taken captive in West Africa by Amos Clowe, a slave trader when his crew left him there. He was then liberated by a sea captain requested by the senior Newton to find his missing son. During the trip home, the ship was trapped in a terrifying storm off the coast of Ireland and almost submerged. Newton pleaded to God and the cargo somehow moved to cover a hole in the vessel’s side and the crew sailed to land. Newton saw this as an answer from the Divine and identified it as his restoration as a Christian. However, he did not wholly reform his ways immediately, his complete transformation was more continuous. Newton later wrote, "I cannot consider myself to have been a believer in the full sense of the word, until a considerable time afterward.” He did start to read the Bible at this time and rethink his views of the morality of slavery.

In 1764, he was anointed as an Anglican priest and penned 280 hymns to compliment his worship services. He transcribed the lyrics for “Amazing Grace” in 1772 (William Walker put the words to the beloved melody “New Britain” in 1835) 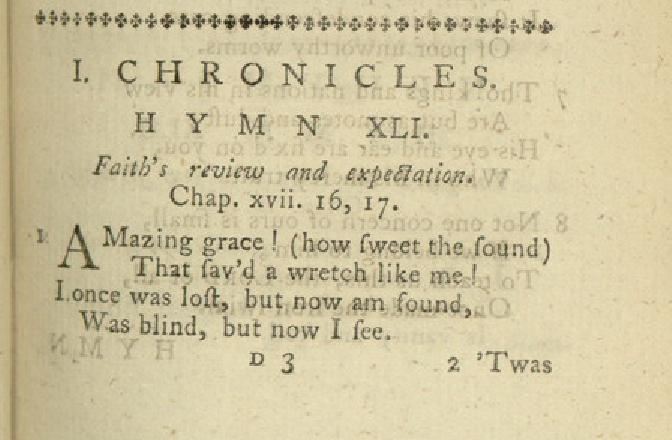 As he found redemption in the grace of God after nearly dying at sea, Newton meant the lyrics of “Amazing Grace” quite literally as a testimonial of the restoring power of God’s love. The hymn’s meaning and theme illustrate that even when we are lost we can be found by grace. Grace is described as having various benevolent purposes including redeemer, protector, guide and joy-bringer. This hymn is a great expression of the redemption and salvation available in God for this life and after.

Amazing grace! How sweet the sound
That saved a wretch like me!
I once was lost, but now am found;
Was blind, but now I see.

Through many dangers, toils and snares,
I have already come;
’Tis grace hath brought me safe thus far,
And grace will lead me home.

The Lord has promised good to me,
His Word my hope secures;
He will my Shield and Portion be,
As long as life endures.

Yea, when this flesh and heart shall fail,
And mortal life shall cease,
I shall possess, within the veil,
A life of joy and peace.

The earth shall soon dissolve like snow,
The sun forbear to shine;
But God, who called me here below,
Will be forever mine.

When we’ve been there ten thousand years,
Bright shining as the sun,
We’ve no less days to sing God’s praise
Than when we’d first begun.

“Amazing Grace” is likely the most popular hymn of the last two hundred years. The uplifting song expressing heartfelt spiritual delight is considered to be performed 10 million times yearly and included on over 11,000 albums so far. It was mentioned in Harriet Beecher Stowe’s book Uncle Tom’s Cabin and had a rise in notoriety during two of America’s biggest challenges: the Civil War and the Vietnam War. Within 1970 and 1972, Judy Collins’ record of “Amazing Grace” filled over 16 months on the chart and peaked at number 5. Many very famous musicians have recorded the hymn including Aretha Franklin, Ray Charles, Johnny Cash, Willie Nelson, and Elvis.

Celtic Woman Sings Amazing Grace, and It's Simply Amazing! from celtic-woman on GodTube.