20 Things You Didn't Know about Moses in the Bible

20 Things You Didn't Know about Moses in the Bible

Moses was famous long before Charlton Heston raised his profile in the 1956 Cecile B. DeMille movie, The Ten Commandments. Universally recognized as the deliverer of his people, the Israelites, from slavery in Egypt, biblical and human history also credit him with establishing Israel’s judicial and religious systems.
But there’s much more to Israel’s mighty leader than what makes the headlines. In the list below, I’ve collected 20 fascinating but little-known details about this great hero of the faith.

20 Rare Things about Moses from the Bible

1. Moses was the first abandoned child mentioned in the Bible.

Moses’ godly parents hid him for three months to protect him from the Egyptian edict that said all male Hebrew babies must be killed. When they could no longer hide him, they set him afloat in a basket on the Nile River (Ex. 2:3).

2. Moses’ name, according to the website, Behind the Name, “comes from the Hebrew name מֹשֶׁה (Mosheh)

and is most likely derived from the Egyptian name Mes meaning ‘son,’ but could also possibly mean ‘deliver’ in Hebrew.”

3. Pharaoh’s daughter paid Moses’ mother to nurse him after she rescued him from the Nile River (Ex. 2:8-9).

4. Moses was the baby of the family.

He had an older sister, Miriam, and an older brother, Aaron.

5. Moses was a murderer.

Seeing an Egyptian beating a Hebrew slave, Moses intervened and killed the Egyptian (Ex. 2:12). To hide his crime, he buried his victim in the sand.

6. Moses worked as shepherd while “on the lam.”

More than just a play on words, when Moses ran from the murder charge, he fled to the desert of Midian where he met Zipporah, the daughter of a shepherd, and began working with her father, Jethro. He married Zipporah and had two sons. Pictured below: Moses defending the daughters of Jethro 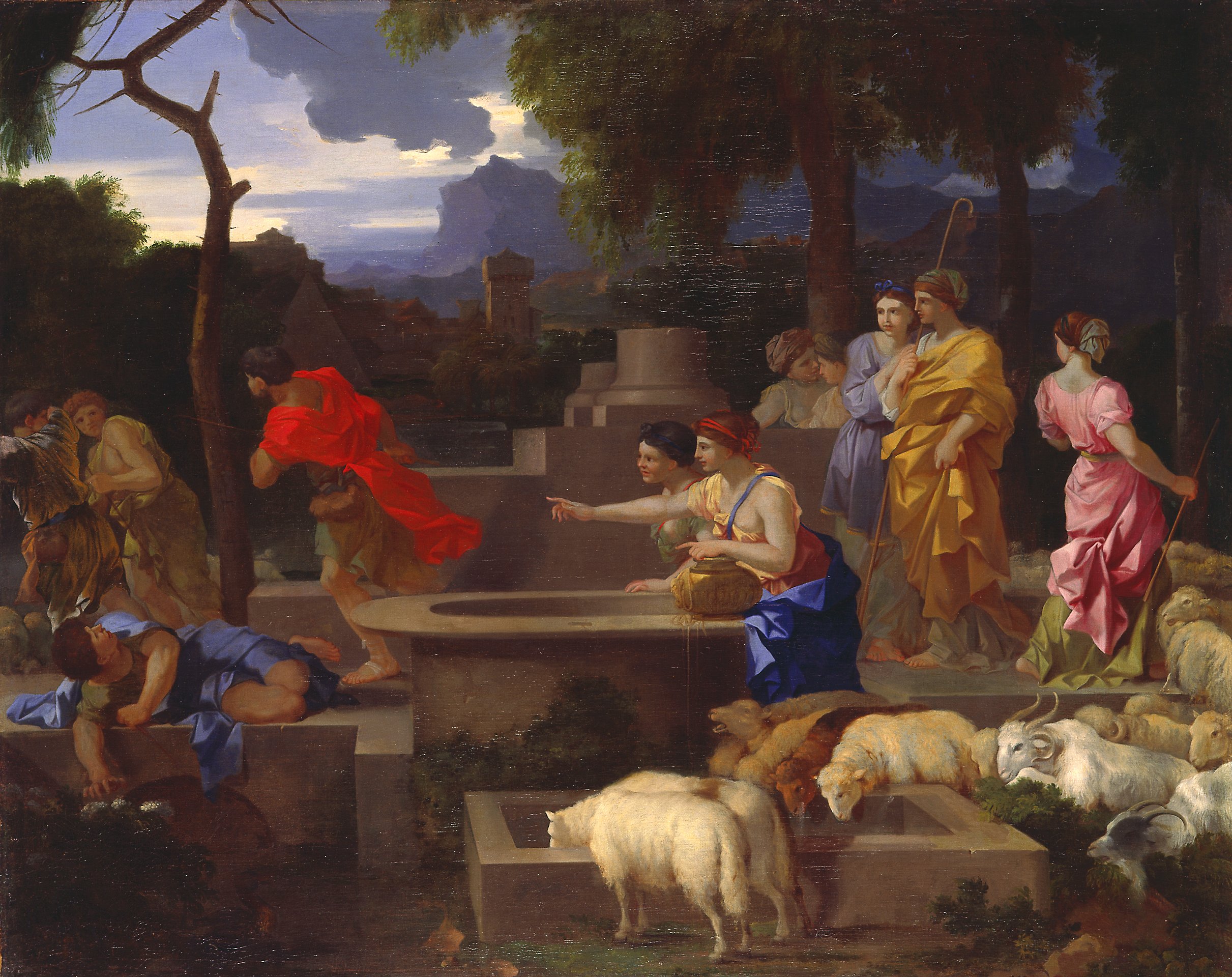 7. During the burning bush episode, Moses gave God five lame excuses for why he couldn’t be Israel’s deliverer

The New Living Translation of the Bible records Moses’s response to God’s call in Exodus 4:10: "O Lord, I'm not very good with words. I never have been, and I'm not now, even though you have spoken to me. I get tongue-tied, and my words get tangled."

9. When Moses insisted he couldn’t be Israel’s spokesperson, God agreed to allow his older brother, Aaron to speak for him.

After the first assignment, however, Moses was front and center, and Aaron takes a backseat to his little brother.

10. Not your typical octogenarian, Moses was 80 years old when he led the children of Israel out of Egypt.

Today most people his age would be firmly ensconced in their rocking chairs, but not Moses. His first 40 years in Pharaoh’s court had prepared him to lead, and his second 40 years had given him knowledge of the desert through which he and the Israelites would travel. Moses was fully prepared for God’s mission at the age of 80; the best was yet to come.

11. Moses was the original snake handler.

Three times during his tenure as leader, he used snakes to demonstrate God’s power. The first time God turned Moses’ rod into a snake, it scared him so much he turned tail and ran (Ex. 4:3).

Briefly. After demonstrating his power by turning Moses’ rod into a snake, God told Moses to place his hand in his cloak. When he withdrew it, his hand was covered in leprosy. Thankfully, God cured the incurable disease almost immediately (Ex. 4:6-7).

13. Concerned, I’m sure, for his family’s safety and aware of his inability to care for them well while orchestrating the biggest exodus in human history, Moses sent his wife and sons back to his father-in-law’s house.

They were reunited after the exodus as the Israelites camped at the base of Mt. Sinai. (Ex. 18:7).

14. Moses was a songwriter.

Or, more accurately, he was a musical collaborator. After the children of Israel crossed the Red Sea on dry land, the waters closed up, drowning the mighty Egyptian army. To celebrate their deliverance, God composed a song and instructed Moses to write it down and teach it to the congregation. It became known as “The Song of Moses” (Deu. 32:1-43).

“The LORD said to Moses, ‘Come up to me on the mountain and stay here, and I will give you the tablets of stone, with the law and commands I have written for their instruction’” (Ex. 24:12). Moses did, however, transcribe the law as given to him by God. These writings compose part of the Pentateuch, the first five books of the Old Testament. (Ex. 24:4).

Along with brother Aaron, nephews Nadab and Abihu, and the seventy elders of Israel, Moses saw God on Mt. Sinai. “Under his feet was something like a pavement made of sapphire, clear as the sky itself. But God did not raise his hand against these leaders of the Israelites; they saw God, and they ate and drank” (Ex. 24:9-11).

God recognized him in the canon of Scripture as “a very humble man, more humble than anyone else on the face of the earth” (Num. 12:3).

His long and varied life can be divided into three parts, each 40 years long. The first as the son of an Egyptian pharaoh, the second as a shepherd, and the third as the esteemed leader of Israel. At the time of his death, he still had perfect eyesight and incredible strength (Deu. 34:7).

19. Moses knew in advance the day of his death

(Deut. 31:14). God instructed him to commission Joshua as his replacement, then climb Mt. Nebo. There he showed him the Promised Land, and there he died.

20. God buried Moses on the mountain, and his grave was never found.

All we know is that somewhere in Moab, in the valley of Peor, lie the bones of one of the greatest heroes of the faith. (Deu. 34:5-6).

This collection of facts about Moses is like a grain of sand in the desert of Sinai. It’s no wonder the movie that brought Moses to life for millions, The Ten Commandments, became Cecile B. DeMille’s most successful work.
If this peek into Moses’ life has piqued your interest, you can read all the glorious details in the Old Testament books of Exodus, Numbers, and Deuteronomy.
Lori Hatcher is a blogger, inspirational speaker, and author of the Christian Small Publisher’s 2016 Book of the Year, Hungry for God … Starving for Time, Five-Minute Devotions for Busy Women. A Toastmasters International contest-winning speaker, Lori’s goal is to help busy women connect with God in the craziness of everyday life. She especially loves small children, soft animals, and chocolate. You’ll find her pondering the marvelous and the mundane on her blog, Hungry for God. . . Starving for Time. Connect with her on Facebook, Twitter (@lorihatcher2) or Pinterest (Hungry for God).
Publication date: August 1, 2016