How a "Scarlet Cord" Connects the Entire Bible

How a "Scarlet Cord" Connects the Entire Bible

History hinges on a single pivotal event: the sacrificial death of Jesus Christ on the cross. There, God’s great redemption of mankind was accomplished—a rescue mission that culminated at the end of Christ’s three-and-a-half-year public ministry but began before the world was formed.

This incredible tapestry is woven throughout the Scriptures in red.

The great Bible teacher of yesteryear, William Evans, noted, “Cut the Bible anywhere and it bleeds.” The blood of Jesus stains every page, every book, in both testaments. Evans observed that “the atonement is the scarlet cord running through every page in the entire Bible”; it “is red with redemption truth.”

Jesus Himself intimated this connectedness—this bloodline of redemption. After His atoning death and resurrection, He approached two unnamed disciples who were consumed with discouragement as they were walking to a town near Jerusalem. Disillusioned over Jesus’s execution, they didn’t recognize Him by face, nor did they expect what they were about to hear. They tried to explain to this “stranger” what had happened, even though they were unaware of what had really happened (Jesus was risen and standing right there!).

He told them, “O foolish ones, and slow of heart to believe all that the prophets have spoken! Was it not necessary that the Christ should suffer these things and enter into his glory?” The author, Luke, then explained, “And beginning with Moses and all the Prophets, he interpreted to them in all the Scriptures the things concerning himself” (Luke 24:25-27 esv).

He must have pointed to highlights like Abraham’s near sacrifice of his son on the very mountain where Jesus, the Son of God, would die centuries later. He probably told them how the exodus from Egypt prefigured our exodus from the slavery of sin, made possible by His death.

I can almost hear Him describing the blood sacrifices of Leviticus, the servant prophecies of Isaiah predicting Christ, and so many psalms long considered to be messianic in nature.

Actual scarlet cords show up in Scripture with some interesting overtones.

The garments of the high priest and the curtains of the tabernacle in the Old Testament included scarlets threads. Many have seen these usages as prefiguring the atoning work of the future Lamb of God, Jesus Christ, through His shed blood.

When an advance team of Jewish spies scouted out Jericho and almost got caught, a faith-filled ex-prostitute named Rahab helped them to escape through her window via a scarlet cord. They promised her when the day of Jericho’s destruction came, she and her family could be identified for rescue by hanging that rope from her window on the wall of the city.

The scarlet cord—the color of blood—was a sign of her faith that led to her salvation. The cord, for Rahab, worked much like the smeared blood on the lintels and doorposts of Jewish homes in Egypt on the night of the Passover decades before.

The main theme of the Bible is Christ.

He’s the hero of the story because His sacrifice on the cross provided salvation for mankind. The “scarlet thread” of redemption is interwoven through the entire story and can be seen in the many accounts of biblical history that tell His story.

It weaves together the hides of the animals slaughtered in the Garden of Eden to provide garments for Adam and Eve.

It snares the ram provided in Isaac’s place on Mount Moriah.

It stains the doorposts in Egypt and trickles down the altar in the tabernacle in the wilderness and the temple in Jerusalem.

That blood-red cord binds the Old Testament to John the Baptist’s introduction of Jesus as “the Lamb of God who takes away the sin of the world,” and to the beams of a Roman cross at Golgotha, where Jesus declared, “It is finished!”

Though Jesus had a miraculous birth, though He performed many nature-defying wonders, and though He taught the most sublime truths ever proclaimed, none of these provide salvation, and none are the focal point of His ministry.

The epicenter of all history, especially redemptive history, is the cross.

Bethlehem’s baby was born to die! The Bible even refers to Jesus in its final book as “the Lamb slain from the foundation of the world” (Revelation 13:8). In other words, before God made the world, He made the plan to save the world. And why blood? Because “without the shedding of blood there is no forgiveness” (Hebrews 9:22 niv).

That’s why the scarlet thread leads all the way to the cross.

We know the New Testament authors were keen to this by how much literary real estate they devoted to the details surrounding the crucifixion. In the four Gospels (Matthew, Mark, Luke, and John), there are only four chapters devoted to the first thirty years of Jesus’s life. The same books provide eighty-five chapters about His last three-and-a-half years, the span of His earthly ministry.

Of those eighty-five chapters, twenty-nine are dedicated to the final week of His life, and thirteen of those twenty-nine chapters focus solely on the last twenty-four hours! The events of Jesus’s last day, leading up to and including the violent crucifixion, take up 579 verses.

Jesus wanted to make sure that His followers never forgot it. “Do this in remembrance of Me,” Jesus said as He gave the familiar elements of the Passover meal new meaning.

In heaven, I believe you’ll see Jesus bearing the wounds marking that event.

When Jesus was in His resurrected body, He still bore those scars. He instructed his doubting friend, Thomas, to touch those lesions on His hands and side. Forty days later, Jesus ascended in that resurrected body into heaven itself.

It’s amazing to think that the only works of man that will be seen in heaven are the wounds inflicted on Jesus on the cross. 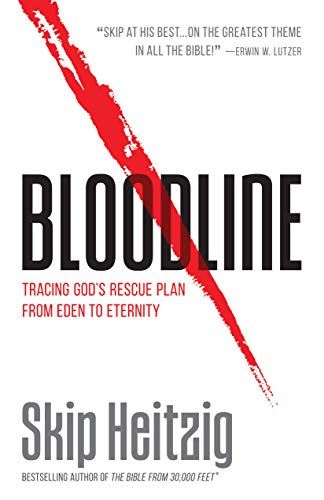 Skip Heitzig, author of Bloodline: Tracing God’s Rescue Plan from Eden to Eternity, and The Bible from 30,000 Feet, is pastor-teacher of Calvary Church, ministering to more than 15,000 people weekly. He holds a DD and PhD from Trinity Southwest University and has a popular multimedia teaching ministry that includes print, audio, and online resources. Skip and his wife, Lenya, reside in New Mexico and have one son and two grandchildren.