How Does Matthew Prove That Jesus Is the Messiah?

How Does Matthew Prove That Jesus Is the Messiah?

The gospel of Matthew, like the other three canonical gospels, tells the good news about Jesus. They are not biographies in the modern sense. They tell us very little about his early life. Rather they focus on what he did and said over the last three years of his life. The primary emphasis for all four gospels was Jesus’ sacrificial death and resurrection, spending a significant portion of their story on that last week of his life.

But each of the gospels also has its own individual emphasis and target audience. For Matthew, his target audience seems to be Jewish. And his emphasis is on demonstrating that Jesus is the Messiah foretold in the Jewish Bible. Matthew repeatedly references Old Testament passages and identifies their fulfillment in Jesus’ life and ministry. The intent of this article is to look at Matthew’s use of the Old Testament in affirming Jesus as the Messiah.

Matthew, and other New Testament writers, reference many Old Testament passages and identify them as pointing to Jesus. And they do that under the inspiration of the Holy Spirit. But the prophets who were inspired to write these referenced passages did not always realize that they were pointing to a messiah far in the future.

One of the most obvious of these comes from Isaiah – a passage we hear numerous times each Christmas – but one we seldom examine closely. In Matthew 1:22-23 we find Isaiah 7:14 quoted: “All this took place to fulfill what the Lord had said through the prophet: ‘The virgin will conceive and give birth to a son, and they will call him Immanuel’ (which means ‘God with us’).”

Without doubt this passage finds fulfillment in the birth of Jesus. But when Isaiah utters these words he had something else in mind. Isaiah 7:1-17 provides the context for this quotation. The sign given was to the godless king Ahaz. And it was a sign that would find fulfillment within just a few short years. I suspect that Isaiah had no idea that it also pointed to a messiah who would come some around 500-600 years later.

Another thing to note about these fulfilled prophecies is that we do not always know what passage Matthew is referring to. It would seem that sometimes, rather than referring to a specific passage, he is referring to a more general theme of the prophets. This happens a couple of times in Matthew 26:52-56 which refers to the method of Jesus’ capture and coming death.

And, finally, sometimes we have no idea what Matthew is referencing. In Matthew 2:23, Jesus’ family settles down in Nazareth. This fulfills what was spoken through the prophets, that he would be a Nazarene. There is no reference to anything like this in the Old Testament. That is not to call into question Matthew’s inspiration. But it does indicate that Matthew was drawing from a larger collection of writings than we have today.

Matthew makes about 20 specific references to Old Testament prophecy in relationship to Jesus. But he also seems to be making some implicit references as well.

In particular, Jesus is pictured as a new Moses who has come to establish God’s kingdom. Like Moses, who was rescued from the Pharaoh’s decree to kill baby boys, so Jesus was rescued from Herod’s killing of infants. Moses and Jesus both spend time in the wilderness in preparation for their primary ministry. And both of them are foundational in the establishment of God’s people; Israel for Moses and the church for Jesus. Both of them are teachers and miracle workers. Moses’ ministry ends at the Jordan River while Jesus’ begins at the Jordan. Moses leads 12 tribes, Jesus starts with 12 disciples.

The Son of David

In 1 Samuel 7:16 God promises David that “Your house and your kingdom will endure forever before me; your throne will be established forever.” There are messianic overtures to this passage that were especially relevant in the Israel of Jesus’ day. They chaffed under Roman rule and looked to the time when a son of David would rise to overthrow the Romans and reestablish David’s kingdom.

In Matthew 12:22-23, Jesus heals a demon possessed man who was blind and mute. In response the crowd begins to wonder, “Could this be the Son of David?” They were not just wondering if Jesus was a descendant of David. Instead, their question pointed back to 1 Samuel 7:16. Is it possible that Jesus is the one who will reestablish the kingdom? Eight other times in Matthew this title, Son of David, is applied to Jesus. And each time it has messianic implications.

Explicit References to the Old Testament

The table below provides a list of the explicit references Matthew makes. In each one of these, Matthew expressly says that something Jesus did, or that was done to him, was to fulfill what was written.

One of these (Matt. 3:1-3) is really about John the Baptist. But by establishing him as the forerunner of the Messiah, it points to Jesus as that Messiah. And a second of them (Matt. 4:5-6) is quoted by Satan in his second temptation. Satan tempts Jesus to fulfill this in a dramatic way in order to impress the crowds, but Jesus declined.

Matthew uses the rest of these fulfilled prophecies to demonstrate to his Jewish audience that Jesus is indeed their long awaited Messiah. And in Matthew 5:17 he makes that clear, quoting Jesus as saying that he had come to fulfill the Law and the Prophets. 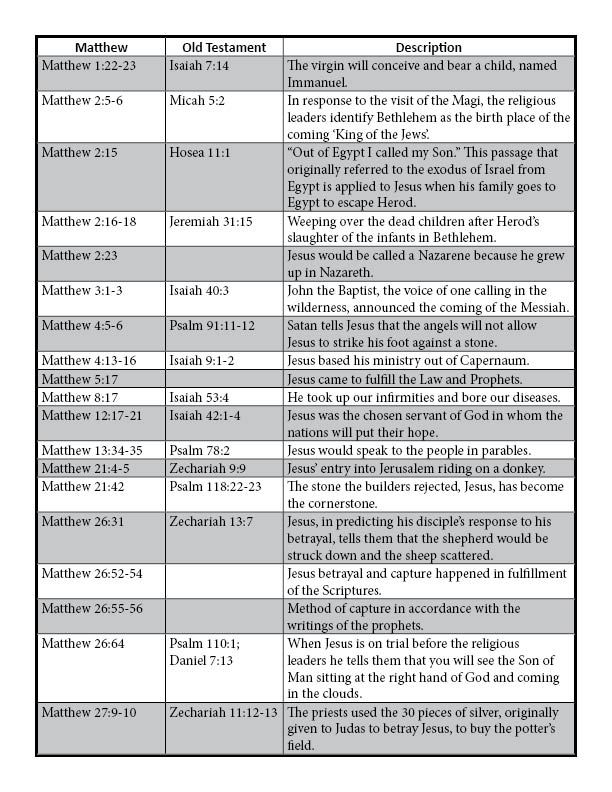 Why did Matthew chose these specific prophecies to prove that Jesus was the Messiah? There are many others that he could have used, some of which are referenced in the other gospels. I don’t believe there is any way that we can know the mind of Matthew, and why he chose these. But it is likely that he felt these would be convincing to the Jewish audience he wrote to. In the same way that John tailors his list of signs (John 20:30-31) to convince his audience that Jesus was the Christ, so it is likely that Matthew does the same.

Matthew knows his audience well. He is not just telling a bunch of stories about Jesus. Instead he has put together a well-crafted account of Jesus life and ministry. An account that is focused on proving to his Jewish audience that Jesus is the Messiah promised in their Scriptures. And his use of the Old Testament prophets and psalms is an integral part of his proof.

Matthew, in this gospel, is doing what Jesus did on the road to Emmaus (Luke 24:25-27), and Phillip did with the Ethiopian (Acts 8:34-35). He is proclaiming to them, from their Scriptures, who Jesus is.

Ed Jarrett is a long time follower of Jesus and a member of Sylvan Way Baptist Church. He has been a Bible teacher for over 40 years and regularly blogs at A Clay Jar. You can also follow him on Twitteror Facebook. Ed is married, the father of two, and grandfather of two lovely girls. He is retired and currently enjoys his gardens and backpacking.

Ed Jarrett is a long-time follower of Jesus and a member of Sylvan Way Baptist Church. He has been a Bible teacher for over 40 years and regularly blogs at A Clay Jar. You can also follow him on Twitter or Facebook. Ed is married, the father of two, and grandfather of three. He is retired and currently enjoys his gardens and backpacking.