The Miracle of Manna in the Wilderness

The Miracle of Manna in the Wilderness

When the Israelites fled Egypt, after over four hundred years of slavery, they spent forty years wandering in the wilderness before they entered the Promised Land. During this time, God provided substance for them to eat every day in the form of quail (meat) and manna (Exodus 16).

Manna, basically a word that means “what is it?” is a bread-like substance that fell from heaven (Psalm 78:24), and that tasted like honey.

The Israelites would go and collect a daily portion of manna each day, ensuring to get a double portion before the Sabbath (so they didn’t work for their food on the Sabbath). If they grabbed too much or too little, they suffered the consequences (Exodus 16:20).

An exercise in trusting God’s provisions, the Israelites ate this bread of heaven throughout their several-decade stay in the wilderness.

Where Is Manna Mentioned in the Bible?

We see manna first introduced in Exodus 16. Right before this, the Israelites complained to Moses, saying he brought them out to the desert to die, with no food substance.

While they grumble and say their days in slavery in Egypt were better, God provides food and doesn’t let them go hungry.

Numbers 11:8 describes what the Israelites did with this bread from heaven. They made it into cakes, boiled it, and ground it into flour.

Deuteronomy 8:3, which Jesus later quotes when tempted by Satan, mentions these provisions from God – although it also mentions that man does not live by bread alone. Even if we fulfill our physical needs, we have spiritual needs as well. John 6:38 makes mention of manna as well. It says that even though manna filled the physical needs of the Israelites, it didn’t prevent death.

On the other hand, the bread of life (Jesus) prevents spiritual death.

Psalm 78:23-25 calls manna “the bread of angels,” since this manna appeared to fall from the sky like snow. Another psalm, Psalm 105:40, talks about how God cared for the needs of the Israelites in the wilderness.

Apart from Jesus quoting the Deuteronomy passage and the John passage above mentioning manna, we don’t see the term pop up in the New Testament. However, Jesus does make an emphasis of bread throughout his ministry.

He primarily refers to himself as the bread of life (John 6:35), and explains that we need the true bread from heaven for our spiritual survival.

Jesus also breaks bread during the last supper to show his body would be broken for us (1 Corinthians 11:24).

What Is Manna Made Of? And Do We Have Anything Similar?

Because of its name “what is it?” we don’t exactly know the contents of manna. We do know it was sweet and looked like small white coriander seeds.

Some have conjectured it was made from a sweet beetle cocoon that grows on green leaves in desert plants.

However, we do have to keep in mind that not all scientific explanations fully fit the narratives found in the Old and New Testaments. For instance, scientists try to form natural explanations for the Ten Plagues in Egypt, which appear to be clearly supernatural phenomena.

Also, in this narrative, God stops the manna in Joshua 5:12 as soon as they eat the food in the Promised Land. Either all those poor beetles died out in one day, or we need an alternate explanation.

In either case, we do technically have something similar (listed in the article above), but if this is truly manna, we may never know. 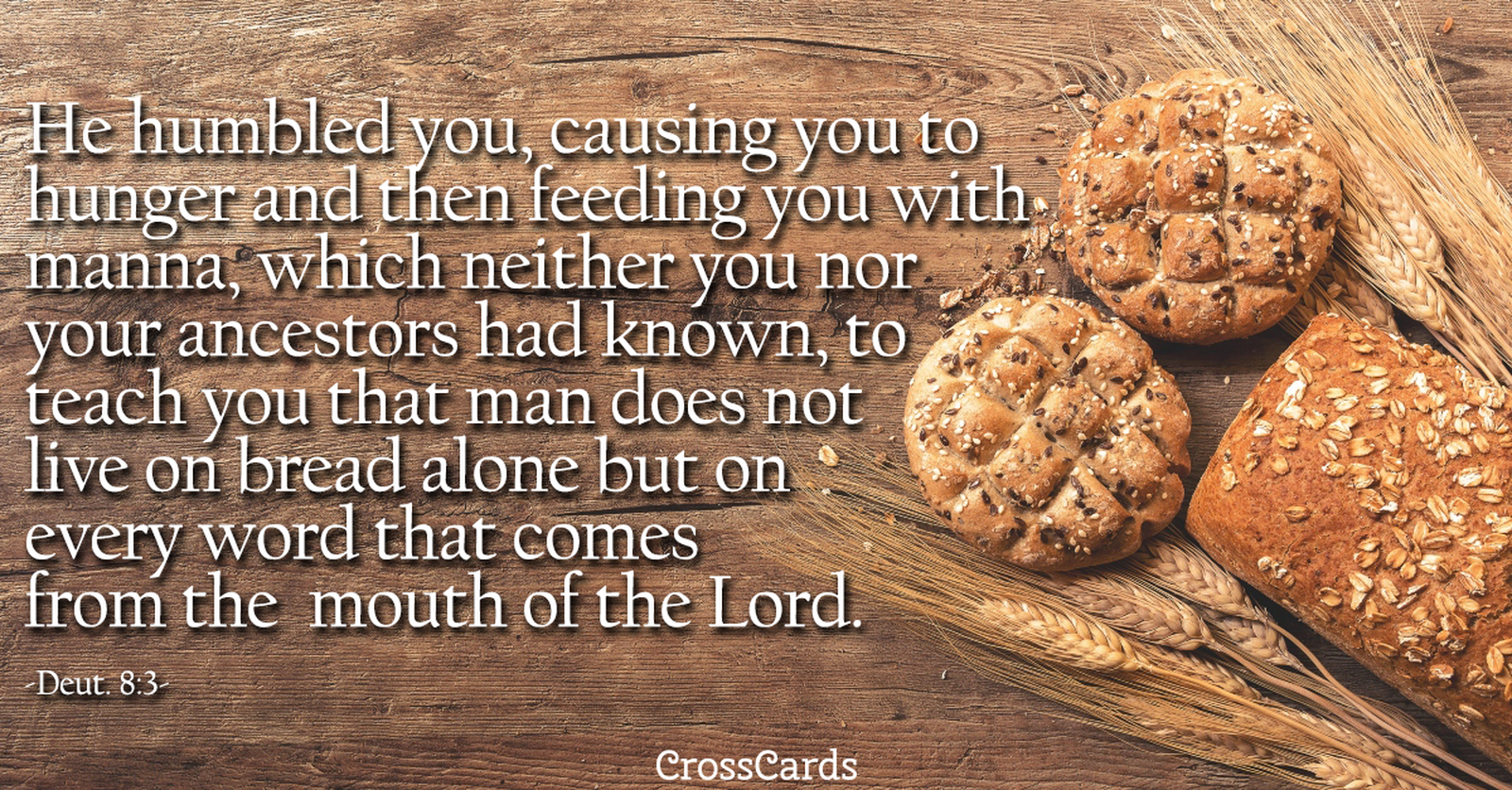 Where Did the Manna Come From?

In the Bible we have two types of manna, and both come from God and heaven alone. We’ll discuss both in this section.

We have the physical manna: the edible manna the Israelites ate in the desert. As mentioned in this article, we don’t know the physical or chemical composition of manna. We can hazard scientific explanations, but sometimes the way Old Testament authors used images may be different than how we would describe items from heaven.

For instance, if we observe the passage from Ezekiel describing angels, we may have no way to wrap our mind around all those eyes and wheels (Ezekiel 1:16).

Then we have the second type of manna: the bread of life, Jesus.

Jesus comes to us in the wilderness (the space between here and heaven) and provides for us the true substance we need. We need him, the bread of life, to spiritually survive.

We can try to describe Jesus, but Jesus is far more complex than a human explanation. Just like manna, we come up short, and end up with, “What is it?”

Both types of manna come from heaven. God provides the manna we need.

Why Did God Send Manna to the Israelites?

God sent manna for a few reasons during the Israelites’ time in the desert.

First, and most practically, he wanted to meet a physical need. They didn’t have many options of food in the wilderness, and they’d begun to think that God had led them into a death trap. God provides food for them to show he meets our needs, even when situations seem most dire.

Secondly, God wants the Israelites to practice trust and obedience.

Some Israelites take too much manna on some days, and it rots in their tents, full of maggots. Other Israelites don’t obey God’s command to collect double portions before the Sabbath, and they end up hungry on the Sabbath, because manna didn’t fall that day.

God provided manna as a way to rely on him fully. If he provided manna, and the Israelites had a fresh grain supply nearby, they wouldn’t really care about God’s provisions.

But they had few options in the wilderness, so they had to exercise trust that God would provide the next day, the same way he had the day before.

Thirdly, God wanted to foreshadow the most important manna from heaven: Jesus.

Although he provided for the physical needs of the Israelites, he knew they, along with all of mankind, needed a permanent, not temporary, solution to their need for spiritual bread.

God provides by way of Jesus’ ministry on earth, and through his death and resurrection.

What Does This Mean for Christians Today

As mentioned above, we need spiritual bread. Although God does provide for our physical needs, we need far more than physical bread alone. We need the bread of life to survive.

Also, God may sometimes place us in a wilderness setting. Maybe we’ve relied too much on our own abilities or our own “bread” in a metaphorical sense, that we’ve forgotten from whom all good gifts come.

During such times, we need to exercise trust and obedience. Maybe God has placed us in a financially unstable situation, and we’ll still trust to tithe (knowing he’ll provide), for instance.

No matter what the case, we are always in a wilderness, until we reach heaven. Whether we are in dire need of bread or have provisions, we haven’t reached the Promised Land yet.

During this in-between, here-not-yet period, we have to trust in the Lord and obey him.

We need to trust in the bread of life, the true manna, for our physical and spiritual well-being.