What You Need to Understand about Jesus as Messiah

What You Need to Understand about Jesus as Messiah

The word Christ is not Jesus’ last name. In the first century, that kind of naming was accomplished by saying where someone was from or who their father was: “Jesus of Nazareth” or “Jesus, son of Joseph.” Instead, Christ is a title (like calling someone a teacher or a doctor) that also means “Messiah.” So when we say “Jesus Christ,” we are describing his identity: “He is Jesus the Messiah.”

What Does Messiah Mean - Biblical Usage

The term "messiah" is the translation of the Hebrew term masiah, which is derived from the verb masah, meaning to smear or anoint. The term is used in the Old Testament of kings and priests, who were consecrated to office by the ceremony of anointing. It is applied to the priest only as an adjective--"the anointed priest”. The special title of Messiah is never used not used in the Old Testament but rather the Messianic hope and seedline through which Jesus would be born.

The New Testament writers, evangelists, and apostles give no reason to doubt that Jesus is the Messiah, or in New Testament language, the Christ. He came, born of Abrahamic and Davidic lineage ( Matt 1:2-16 ; Luke 2:4-15 ). John the Baptist identified Jesus as the Messiah by referring to the wider dimension: "Look, the Lamb of God, who takes away the sin of the world!" ( John 1:29 ). Jesus was the One who would bring judgment as well as life by the Spirit of God ( Matt 3:1-12 ). The evangelists record that Jesus was anointed by the Spirit when he was baptized. Jesus proclaimed himself as the Messiah in Nazareth ( Luke 4:16-22 ) and at Jacob's well to the Samaritan woman ( John 4:24-25 ).

Story & Hope of the Messiah

But what does it mean to be “the Messiah”? Well, that requires some background. You can’t understand what it means to call someone “the Hero” of the story unless you understand the story, who the characters are, what the danger is, and what it will take to win the day. So the only way to truly understand what it means to say Jesus is the Messiah is to understand the “Grand Story” of the Bible. This is something we should continue to read, study, and learn our entire lives as disciples, but here is a very brief introduction to the big plot points.

Creation:  The Bible begins with God calling all things into being. Every part of creation is declared “good” by the Creator. God’s creative work climaxes in his creation of human beings, uniquely made in his image to rule the world as his representatives. The first human beings, Adam and Eve, enjoyed warm and close fellowship with God in the garden of Eden.

Fall: God is both holy and loving. We were created to glorify him and to have an intimate relationship with him. Tragically, Adam and Eve were deceived by Satan and chose to rebel against God. By their decision, human beings are now spiritually dead and separated from God. We are incapable of undoing the effects of sin; we need God’s saving intervention.

Covenant: God reached out to sinful humanity in several ways. He saved a man named Noah and his family in a time of judgment, making a covenant with him not to destroy the earth again in a flood. Then he offered a covenant to a man named Abraham that became an outline of his redemption plan in history. God promised to create a nation from Abraham and to bless all people of the world through him. Abraham believed God and accepted God’s covenant, and God made Abraham’s descendants into twelve tribes who became slaves in Egypt.

Israel: The story of the Bible continues with the descendants of Abraham, and we see how God, using Moses, liberates the twelve tribes from bondage in Egypt. God gave the Ten Commandments and the Law as a gift of grace, sacrifices for sin, and a special promised land to the tribes. God found in David, one of their kings, a faith so pleasing that God made another promise to fulfill his commitment to bless all people. He said that one of David’s descendants would become the messianic King. His kingdom would never end and would be a paradise for God’s people. The Messiah would also judge those outside his kingdom.

Jesus: Jesus came as this Messiah, our king, and in him, the kingdom of God broke into this sinful world. Jesus came to reveal the true nature of God and to restore and redeem God’s original intent for humanity. Jesus’ mission led him to the cross, where he suffered and died to save all people, both the Jews and the Gentiles (those not physically descended from Abraham). After three days Jesus rose from the dead, freeing us from Satan, and then he ascended into heaven. He is coming back again to fully restore God’s kingdom. By repentance and faith in Jesus and his finished work on the cross, we can enter into his kingdom reign. He takes our sin away, he gives us the gift of the Holy Spirit, and we are adopted into his Father’s family. Our old identity is dead, and we are a new creation through the grace of God, by faith in Jesus and what Jesus has done for us. We now live a new life, trusting and following him, as his disciples. This teaching is called the gospel, which means the good news. It is the best news anyone can ever hear!

Church: Before Jesus ascended into heaven, he gave his apostles a commission to carry on his teachings and make disciples. After ascending to heaven and taking his seat on God’s throne, he sent the Holy Spirit and established a global community for those who placed their faith in him. Jesus is the head of this body, and he calls those in his church to use the gifts and the message he has given them to be disciples who make disciples. Disciples are people who love God and others and who live out God’s kingdom reign in word and deed by reaching out to those who do not know the gospel and by showing com- passion toward the poor and the oppressed. The life and teachings of Jesus form the blueprint for the mission and identity of the church, and the Holy Spirit unites disciples from different cultures, places, and times intoonebody—thebodyofChrist.

Restoration: Jesus promised his followers that he will return one day to fully remove the effects of the curse and usher in the new age to come where sin, death, pain, and sadness are gone forever. This is the blessed hope for all disciples of Jesus. Until that time, Jesus offers humans a standing invitation into his “already, but not yet kingdom.” He offers salvation to us by grace through faith. Grace is God’s unearned favor where he offers us forgiveness and life in his kingdom, and we respond to his offer by faith, which is trusting and following Jesus. When Jesus comes back, he will judge those living as well as those who have died. Those who did not respond to God’s gracious invitation to be redeemed in this life will be punished for their sins in hell. Those who trusted and followed Jesus will experience everlasting joy with God forever in the new heaven and new earth.

These plot points are the major movements of God’s story, but the key to understanding Jesus as Messiah is seeing how God’s relationship with humanity is traced out in both the Old and New Testaments.6 Every book in the Bible points to Jesus. Since Jesus came to lead us into a life as his disciples, not just to conversion, this story line is essential knowledge for disciple makers. You can only fully understand and follow who Jesus is and what he calls us into in light of this grand story.

It answers all of the important questions for life.

Answering these questions requires that we draw upon the full story of the Bible, including Jesus’ work on the cross and his life story from the Gospels. The Messiah’s identity is old, deep, and wonderfully complex, grounded in the Old Testament and made clear in the New. 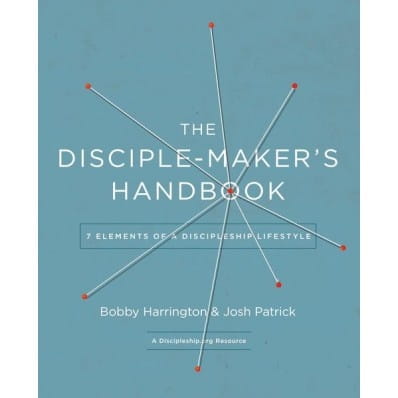 Bobby Harrington is the co-founder of discipleship.org and the founding and lead pastor of Harpeth Christian Church (19 years). He is the chairman of the board for the Relational Discipleship Network and the co-author of DiscipleShift, Dedicated: Training Your Children to Trust and Follow Jesus, and Discipleship that Fits. He has been married to Cindy for over 35 years and they have two adult children who are disciples of Jesus.

Josh Patrick is the Teaching and Discipleship Minister at Harpeth Christian Church. He shares preaching responsibilities with Bobby at Harpeth, oversees their small groups ministry, personally disciples men in the community, and writes a popular blog called, KnowingJesusToday.com. He is married to Joni, and they have three daughters: Lilly, Joy, and Sarah.

This article is part of our Names of God Series featuring the most used names and titles of God found in the Bible. We have compiled these articles to help you study all that God says He is and to help you understand His nature and character. Our hope is that you would focus on these truths and find hope as you rest in the promise of God’s presence, no matter the circumstances.

7 Meanings of Yahweh - God's Name in the Bible
Son of Man - Jesus’s Favorite Name for Himself
Meaning of Elohim in the Bible
Abba Father - What it Means and Why it’s Important
What Does it Mean that Jesus is the Lamb of God?
God is the Alpha and Omega - Meaning & Understanding
The Meaning of Hosanna - Powerful Name of Jesus from the Bible
Jehovah Jireh: “The Lord Will Provide” Name of God
Jehovah Nissi: "The Lord is My Banner" Name of God
What Does Yeshua? BIblical Name for Jesus