Here are six astronauts. Six fascinating mortal men. Six fearless and frail spacemen who undertook unthinkable journeys to unimaginable places. These are men we can learn from and be inspired by. Because, despite their supreme courage and incredible adventures, they lived lives not that unlike yours and mine. Each astronaut profiled here hails one or more of NASA’s legendary programs—Mercury, Gemini, and Apollo—from the midcentury golden days of the space age. These guys went higher, farther, and faster than any human before or since.

Each man here is or was accomplished and confident—in themselves, in their preparation, in their spacecrafts. They had faith in science and engineering. They trusted them so much, in fact, they were willing to face the very real prospect of death by explosion, by speed, by cold, by void, and by radiation. But they all had faith in something else too—something beyond physics, more fundamental than the laws of aeronautics and astronautics. Something more basic even than the law of gravity. These men had faith in God. John Herschel Glenn Jr. was an engineer, a Colonel in the US Marine Corps, a test pilot, a NASA astronaut, and a US senator. He was a member of the Mercury 7—the very first astronauts ever chosen by NASA. His 1962 Mercury-Atlas 6 flight made him the first American to orbit the Earth, circling it three times in 1962; it also made him an American hero. But it was Glenn’s Ohio Scotch-Irish family and forebearers that imbued him with a strong belief in God. Indeed, a few months after his famous spaceflight, evangelical magazine Christianity Today called his faith “rugged and unshakable.”

For decades after his famous trip to space, though, Glenn was forced to live out his faith not in space but on the ground. President John F. Kennedy awarded him the NASA Distinguished Service Medal—and promptly grounded him. He’d become “so valuable to the nation,” said NASA administrator Charles Bolden, Kennedy wouldn’t “risk putting him . . . in space again.” So Glenn used his Earth-bound hero status to speak about his flight—and about his faith. But he didn’t stay grounded permanently. At age 77, in 1998, near the end of a long career in the US Senate, he joined the STS-95 mission crew on space shuttle Discovery. And during a news conference from orbit, Glenn radioed back, “To look out at this kind of creation out here and not believe in God is, to me, impossible.” 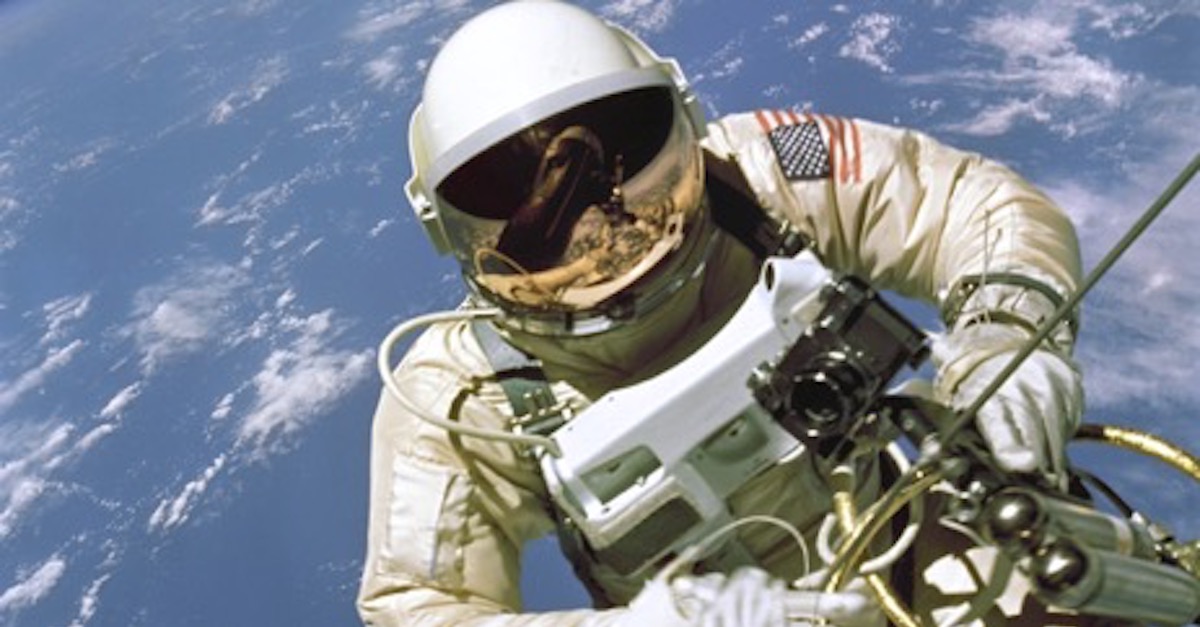 Edward Higgins White II was an engineer, a Lieutenant Colonel in the US Air Force, a test pilot, and NASA astronaut. White was among NASA’s second group of astronauts (the “New Nine”) selected in the fall of 1962. His first big assignment was to be the pilot for the1965 Gemini IV mission, alongside command pilot James McDivitt. On that flight, White became the first American to leave the confines of an orbiting spacecraft.

And during that historic spacewalk White experienced something he didn’t expect. He confided later to his friend the Reverend Jackson Downey of First Methodist Church in Cocoa Beach, Florida, that out there in space, he’d sensed the presence of God. White’s next assignment was to the very first of the Apollo missions—along with Virgil “Gus” Grissom and Roger Chaffee. But tragically, one month before their February 1967 scheduled launch, during a practice run-through count-down procedures, faulty wiring ignited a fire. Before the astronauts could escape, an inferno engulfed the pure-oxygen-filled Apollo 1 capsule. All three men were killed.

In a sermon following the tragedy, Pastor Downey asked his congregation, "'Where is God" . . . "Where was God last Friday?" Then he provided the answer: "God was in a capsule. God was in Ed White." Leroy Gordon "Gordo" Cooper Jr. was an aerospace engineer, a Colonel in the US Air Force, a test pilot, and a NASA astronaut. Like Glenn, he was a member of the original Mercury 7. During his 1963 Mercury spaceflight—Mercury-Atlas 9—he became the first American to spend an entire day in space and the first American to sleep while in orbit.

He also flew Gemini V with Pete Conrad in 1965 and, once again, set an endurance record by staying in space for nearly eight days—demonstrating that humans could survive in space for the time it would take to go from the Earth to the Moon and back. But it was on the fourteenth orbit of his earlier Mercury spaceflight that Cooper accomplished something else that might have been an Earth-orbit first. He spoke directly to God. Here’s how a recording device in his capsule captured it:

“Father, thank You, for the success we have had in flying this flight. Thank You for the privilege of being able to be in this position, to be up in this wondrous place, seeing all these many startling, wondrous things that You’ve created.

“Help guide and direct all of us that we may shape our lives to be good, that we may be much better Christians, learn to help one another, to work with one another, rather than to fight. Help us to complete this mission successfully . . .

“Be with all our families. Give them guidance and encouragement, and let them know that everything will be okay. 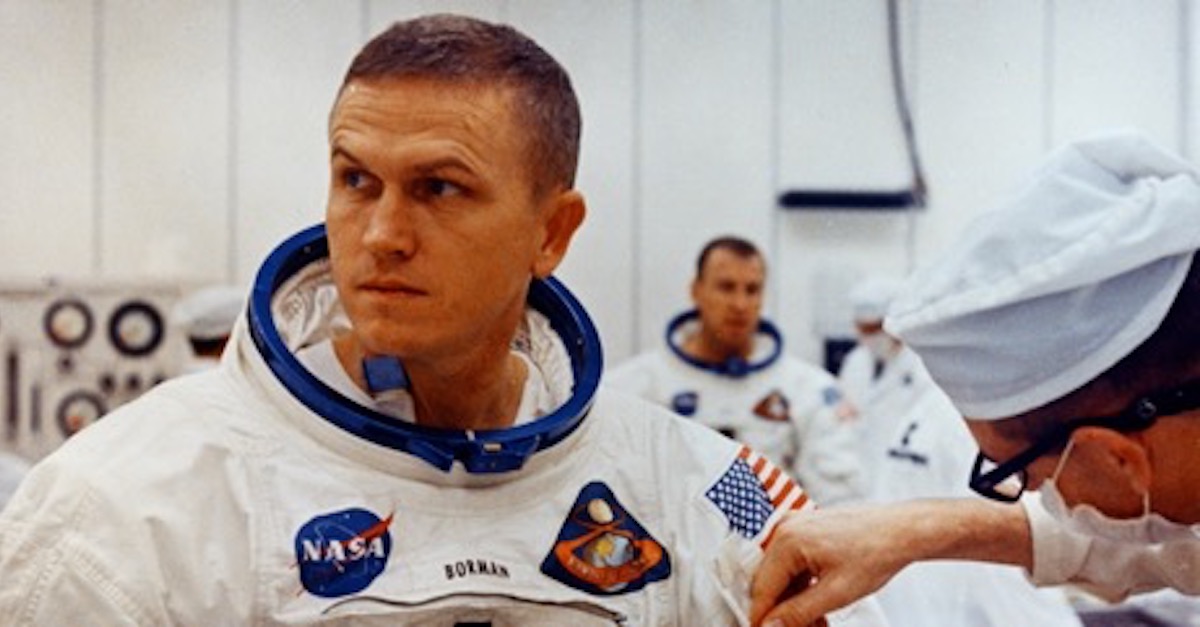 Frank Frederick Borman II is an aeronautical engineer, a retired US Air Force Colonel, a former test pilot, and a former NASA astronaut. The agency selected him in 1962 along with Ed White and seven other men in NASA’s second group of astronauts. Borman commanded both Gemini VII and the famed Apollo 8 mission—the first flight to reach and orbit the Moon. His Apollo crewmates were Jim Lovell and Bill Anders.

On their ninth and second-to-last orbit—just before they were to begin their long trip home—the spacemen clicked on a TV camera and broadcast to a massive audience on Earth. TV Guide estimated that one out of four humans listened in to their telecast. To nearly one billion people, across hundreds of thousands of miles of space, the astronauts described what they were seeing. They took turns giving impressions and panned the camera to show the surface of the moon sweeping by at four thousand miles per hour, a mere sixty miles beneath the command module.

Then, just before signing off, the astronauts offered one final message. They decide to share their “feeling of closeness to the Creator of all things.” And they took turns reading from chapter one of the King James Bible’s version of Genesis: “In the beginning, God created the Heaven and the Earth . . .” When they finished their reading, Borman signed off with this: “And from the crew of Apollo 8, we close with good night, good luck, a Merry Christmas and God bless all of you—all of you on the good Earth.” That was Christmas Eve 1968. James Benson "Jim" Irwin was an aeronautical engineer, a Colonel in the US Air Force, a test pilot, and a NASA astronaut. The agency selected him in 1966 to be among the nineteen-man-strong fifth group of astronauts. NASA then assigned him to be the Lunar Module pilot for Apollo 15; on that flight, he became the eighth human being to walk on the Moon. He and mission commander David Scott also become the first astronauts to deploy and drive the NASA Rover on lunar surface

But the most remarkable thing about Irwin’s moonshot, for him at least, was the odd and quite surprising feeling he experienced while on the Moon—“something that none of his technical training had prepared him for.” What he felt was “an overwhelming sense of the presence of God.” “It was a strange feeling,” Irwin said. “Almost from the time we landed, and all the way back, I was acutely aware of a holy presence.”

In his heart, he knew that the presence was real. He knew that he knew. “God was there with us. Of that I am certain.” In fact, God felt so immediate, Irwin said that one time he actually “turned around and looked over his shoulder”—out of sheer instinct—to see whether someone was standing there. Irwin called Apollo 15 a “baptism in the fiery power of the rocket.” 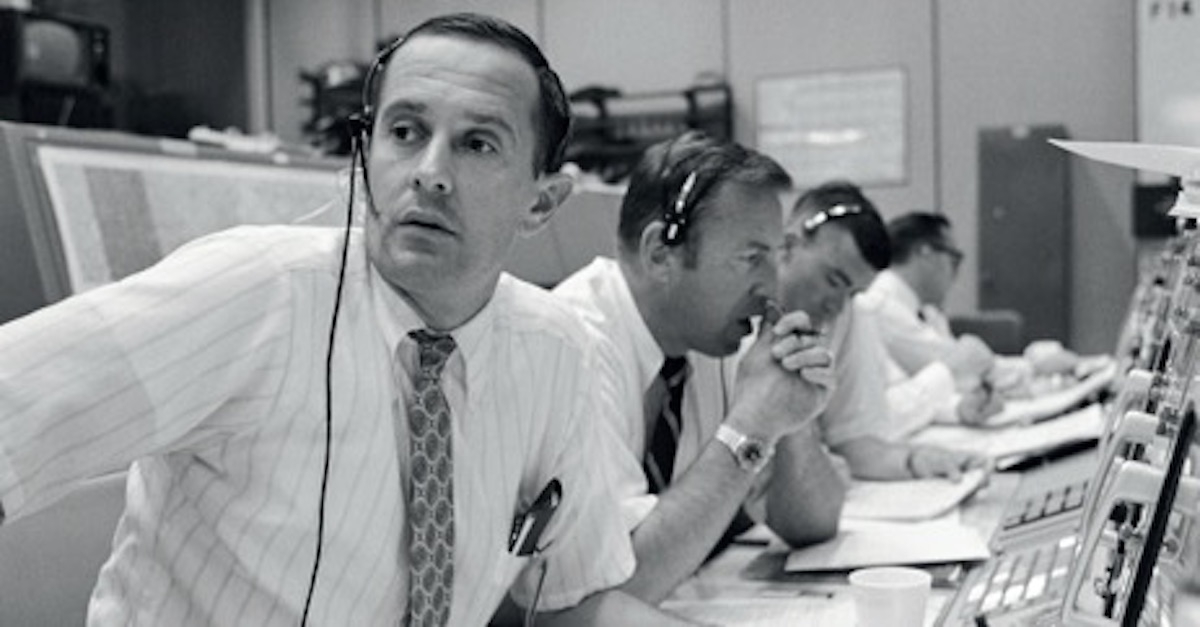 Charles Moss Duke Jr. is a retired Brigadier General in the US Air Force, a former test pilot, and a former NASA astronaut. NASA selected Duke in 1966, along with Jim Irwin and seventeen other young men, to be part of the fifth group of NASA astronauts. One of his earliest NASA assignments was to serve as CapCom for Apollo 11. CapCom is the NASA reduction of capsule communicator—the select few allowed to talk over the radio with the crew of a manned NASA spacecraft. As Apollo 11 CapCom, he got to communicate with Neil Armstrong and Buzz Aldrin when they landed on the moon, and an estimated six hundred million people got to hear his southern drawl.

Duke was also assigned the lunar module pilot slot for the 1972 Apollo 16 mission, making him the tenth person to walk on the Moon. But his experience on the moon was not like Jim Irwin’s, though. “It was not a spiritual experience for me at all,” he wrote. “It was a technical experience.” It wouldn’t be until 1978 that Duke gave his life to Jesus in the front seat of his car in New Braunfels, Texas:

“A number of years after my moonwalk, I began another walk—a walk with God. This experience is even more exciting than my first trip.... It has exposed me to the supernatural and mighty power of God. But most exciting of all, it has led me from a life of continual striving and restlessness to one of peace and fulfillment.”

Each of these men knew that science and religion are not opposed to one another. They knew that both subjects are concerned with discovering truth—but also that they’re focused on different parts of reality. The scientific method is a superb method for making discoveries and acquiring knowledge, for example. But its usefulness is limited to the natural world. It works in the seen. It works when phenomena are physically observable and predictable and repeatable. Religion, by contrast, is focused on the spiritual realm. It, coupled with faith, allows us to access and explore an unseen reality that’s deeper and more ancient than the natural world—a reality that exists beyond worldly weights and measures, apart from data, above complete human understanding.

Justin Camp is a writer with a heart for adventure. He created the WiRE devotional for men and wrote Odyssey: Encounter the God of Heaven and Escape the Surly Bonds of This World, a scriptural field guide for men who desire more. Scouts and prospectors. Explorers and pilgrims. Men tired of living frustrated, burned out, and bored. Men itching to strike off on a mythic journey, to travel ancient routes toward a true relationship with the God of heaven. Toward vitality and confidence, purpose and joy and peace.