5 Things Christians Should Know about Scientology

5 Things Christians Should Know about Scientology

I spent most of my twenties entrenched in Scientology, working at the Celebrity Centre around all the big-name Scientologists of Hollywood. I was convinced the “religion” could help me and others with whatever was ruining our lives. That’s what they told me when I first took the “Personality Test” right there on Hollywood Boulevard on a warm summer night.

1. You Cannot Be a Christian and Still Be a Scientologist.

I wasn’t a Christian at that point in my life, but I remember them saying to other people that Scientology doesn’t keep you from your preferred religion, it simply enhances it. They said you can remain a Christian and be a Scientologist at the same time. The deeper in I got, I found this was a lie. It was propaganda they dished out to keep people from doing their homework and using any ounce of discernment before getting involved.

This claim is the opposite of the words of L. Ron Hubbard, their own founder, who said Christianity was created to fool people into thinking there is only one life. I remember listening to an advanced teaching where Hubbard said Jesus was just a hologram projected onto the earth to trick people into following a lie.

In A Piece of Blue Sky, Jon Atack writes, “In confidential materials, Hubbard attacked Christianity as an 'implant,' and said that Christ was a fiction.”

The basic tenets of Scientology are completely opposite to Christianity. Scientology teaches man is basically good, he experiences multiple lifetimes (reincarnation), and the more “clear” he becomes, the more he can control his life, future, and his eternity. Their definition of Jesus changes as you move up in the system and goes from good teacher in the basic teachings to a fraud in more advanced lectures.

2. All Non-Scientologists are Regarded with Disdain.

“WOG” is a term coined by Hubbard and used by Scientologists to refer to anyone who is not smart enough to be a Scientologist. In Dianetics and Scientology Technical Dictionary, Hubbard says, “Anynon-Scientologist is a ‘wog,’ someone who ‘isn’t even trying.’”

This term dehumanizes anyone who is not a Scientologist and places them in an inferior class. Pride, and a judgmental and condescending attitude is formed in the elite core of “super humans” called Scientologists.

3. Scientologists Believe They Are Above the Law.

I experienced this personally when I received death threats after leaving the “church” and voicing my antagonism towards their principles and agenda.

Since the foundation of Scientology holds that anyone who is not one of “them” is racially inferior, this set the stage for Hubbard to dehumanize them in the minds of those who’ve swallowed the Scientology lie. This “inferior” race is now seen as fair game. Those who are “enlightened” can do anything and everything to make them pay. The ends justify the means. Nothing is off limits, and no crime punishable if it furthers the agenda of “clearing the planet.” Hubbard defines the enemy in what they call an SP Order (SP = suppressive person). “Fair game. May be deprived of property or injured by any means by any Scientologist without any discipline of the Scientologist. May be tricked, sued, or lied to, or destroyed.

4. Celebrities are their Bait.

When I worked on staff at the Celebrity Centre there was always a huge push to draw in celebrities, or “opinion leaders” as they were called, because they could draw so many more new recruits into the organization simply because anything they did was deemed “cool” by their followers and copied.

The more a celebrity gets sucked in, the more dirt the church has on them from notes from counseling sessions. That is used as blackmail to keep them from ever becoming antagonistic towards the mission and goals of the “church.” The threat of personal, intimate, potentially embarrassing facts about the celebrity being made known to the public is an effective weapon to keep these opinion leaders positive towards the organization and silent about their concerns.

5. Hubbard and Hitler Had a lot in Common.

Having been deceived more than once by spiritually abusive and toxic cults, I can tell you the most powerful weapon against deception is warfare prayer against the strategies of the evil one that would keep your loved one ensnared. God can open their eyes as a result of fervent prayers and standing firm against the evil one. Don’t give up. I am living proof that God’s grace can reach those who are blinded by the “angel of light” called Scientology. 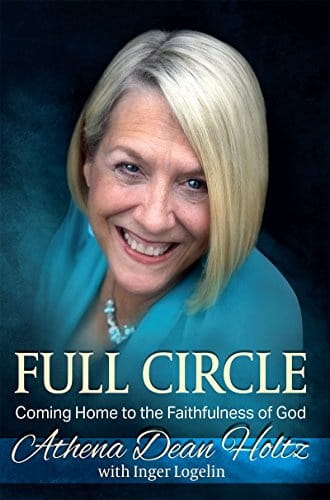 Athena Dean Holtz is a speaker, publisher, radio host, and pastor’s wife. Her memoir, Full Circle: Coming Home to the Faithfulness of God (Redemption Press 2017) chronicles her entrapment and deliverance from two cults, Scientology before becoming a Christian, and a legalistic, destructive, toxic Christian cult called Sound Doctrine after her salvation. www.athenadeanholtz.com.