Can I 'Do All Things?' Examining Philippians 4:13

Can I 'Do All Things?' Examining Philippians 4:13

After John 3:16, Genesis 1:1, John 1:1, and maybe Romans 8:28, the following verse might be one of the most well-known, most-beloved, and most oft-quoted in all scripture:

"I can do all things through Christ who strengthens me" (Philippians 4:13).

Surely many of us could share a time this verse has been an encouragement or a help, or another time where we've used it to admonish others. I can remember being a camp counselor and shouting this verse as support to youth too nervous to navigate our high ropes course. "You can do it, Sally! The Bible says you can!"

But later on I would reflect: "Is that what this verse means? That we can push ourselves to physical feats or worldly accomplishments? Can it really mean that? Then how do people who don't know Christ navigate these ropes and the obstacles of achievement?" Did I really need Jesus in order to climb those trees and zoom down that zip line?

Furthermore, I’ve always wondered, what does "do" refer to in this verse anyway? It's a bit of a vague verb if you think about it. Dictionary.com lists several possible meanings for "do" that kind of fall into two different groups – groups that come close to echoing two different ways of understanding this oft-quoted (and sometimes mis-quoted?) verse:

Group A) To: perform, execute, accomplish, render, bring into being

Group B) To: serve, suffice, endure, approve, give

We'll come back to those in a minute...

I can do all things
Through Christ, who gives me strength.
But sometimes I wonder what He
Can do through me.

No great success to show,
No glory on my own;
Yet in my weakness He is there
To let me know…

His strength is perfect
When our strength is gone;
He’ll carry us
When we can’t
Carry on.
Raised in His power,
The weak become strong.

Notice what Chapman does here. How does the song start? (With our verse, Phil. 4:13. Specifically, "I can do all things..."). How does it end? ("His strength is perfect"). Goes from "I" to "Him," a telling progression, perhaps. He also wonders what Christ can do through him. Why? Is it because he realizes the "all things" he would "do" on his own tend to avoid sacrifice, dying to self, and other personal, worldly victories? There is wisdom at work here, as one of our greatest Christian songwriters realizes he has to get out of the way. He must lose strength before the power comes, not the other way around.

I rejoice greatly in the Lord that at last you have renewed your concern for me. Indeed, you have been concerned, but you had no opportunity to show it. I am not saying this because I am in need, for I have learned to be content whatever the circumstances. I know what it is to be in need, and I know what it is to have plenty. I have learned the secret of being content in any and every situation, whether well fed or hungry, whether living in plenty or in want. I can do everything through him who gives me strength. Yet it was good of you to share in my troubles. (NIV)

So… Paul's word "do," in context, lends itself much more to Column B of definitions above. In fact, the Commentary Critical says the literal Greek meaning here is "I have strength for all things;" so we can add words like "survive, deal with, handle, be content in, etc.," to Column B.

Consider Gil's Exposition of the Bible on the phrase "I can do all things:"

[It] must not be understood in the greatest latitude, and without any limitation; for the apostle was not omnipotent, either in himself, or by the power of Christ; nor could he do all things that Christ could do; but it must be restrained to the subject matter treated of: the sense is, that he could be content in every state, and could know how to behave himself in adversity and prosperity, amidst both poverty and plenty; yea, it may be extended to all the duties incumbent on him both as a Christian and as an apostle, as to exercise a conscience void of offence towards God and men; to take the care of all the churches; to labour more abundantly than others in preaching the Gospel; and to bear all afflictions, reproaches, and persecutions for the sake of it; yea, he could willingly and cheerfully endure the most cruel and torturing death for the sake of Christ: all these things he could do, not in his own strength, for no man was more conscious of his own weakness than he was, or knew more of the impotency of human nature; and therefore always directed others to be strong in the Lord, and in, the power of his might, and in the grace that is in Christ, on which he himself always depended, and by which he did what he did.

I can't help but wonder what, if anything, this does for those of us who have always used this verse as a platitudinal confidence booster. Speaking for myself, as a younger Christian I might have felt like one of my primary weapons or favorite toys had just been cruelly yanked away from me, and I might be feeling a little defensive. When I was a fundamentalist, legalistic Christian, I would have beaten down myself and everyone else for not "doing" the take-up-the-cross, die-to-self version of "all things" every day, and taken smug satisfaction in telling younger Christians how wrong they were. Currently, I'm coming to find I have very little to do with any of it. I simply deal with life as it comes through Christ who gives me strength. As the song we quoted says, "no glory on my own."

But if that's so, why is "Do All Things” still an important concept for Christian living (if indeed it is)?

Here's what I would contend: 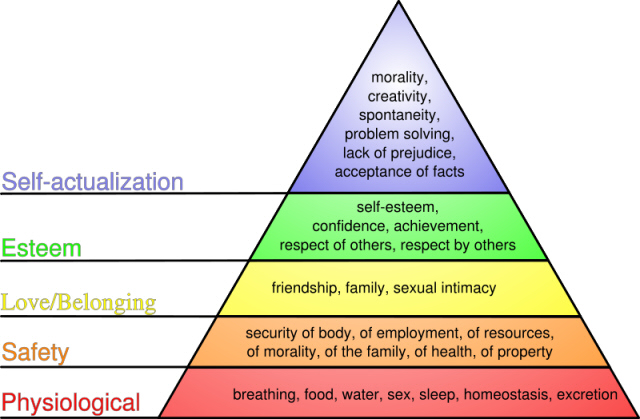 At the base of the pyramid are the most basic Physiological needs (food, water). Next up is Safety/shelter, then Belonging/love/acceptance, followed by Esteem and Self-actualization/personal growth at the top. According to Maslow, it's only after the lower levels are taken care of that we are free to exist in the upper planes.

My wife Valerie said something once that really put this idea into a new light for me. Our son Jordan, then 3, had been singing the praise song, "Seek Ye First," which is based on Jesus' words in Matthew 6:33. He asked, "What does 'all these things will be added unto you' mean? (emphasis mine)

Val explained (in a much more appropriate way for a 3-year-old than I am about to) that if we trust God to provide for us, take care of us, and direct our paths, while we focus on keeping His commandments and loving others (i.e. "doing"), instead of the other way around, or the world's way, then we're set. It's the order in which God wanted things done.

This totally jives with "doing" God's word and seeking to have his righteousness first. It totally inverts the direction of the pyramid. That's what being able to "do all things through Christ" does. Instead of "self-actualization" as the ultimate, final step, Christians can come to "God-actualization," if you will, involving true self worth, ministry, repentance, study, love, as the primary step, and then see their more basic needs met.

Now the question remains "what does that look like?" When this concept is really and truly played out in life, how does it look? Can it be done? How radical an idea is this?

If you want to read a very real, very inhumanly possible example from the still-too-recent past of what "doing all things through Christ" means through the lens we've constructed here today, please read Dave Burchett's excellent article: "Where Do You see Jesus? Contrasting Responses to PA Shooting." Warning: bring tissues.

There's nothing wrong with Philippians 4:13 giving you encouragement when you feel inadequate. But ask yourself: what have you come through in life that you could never have "done" except for that same strength that led Jesus to be able to live sinlessly and carry through with a brutal sacrifice He could have called upon angels to stop?

Let me leave you with this perhaps-disquieting thought... If the meaning here is, as the Commentary suggests, "I have strength for all things," then consider whether "all things" involves stuff we'd normally try to avoid – problems, suffering, trials, tribulations, and all manner of troubles that cause you to need that strength? Could it be that's where God wants you for His greatest glory to show His perfect strength? After all, Paul was in prison (yet content and still spreading the gospel) when he wrote these famous words...