Do You Need a Reality Check?

Do You Need a Reality Check?

“You have multiple blood clots in both lungs.”

Just a few hours earlier, I had been reading and relaxing in a chair at home when I felt a sudden tightness in my neck area, a building pressure that then spread down my chest and arms. It was painful, but not unbearable. I was breathless, hot, and disoriented.

Although the symptoms lasted only about ten minutes, my wife, Shona (an experienced family physician), was adamant that further investigation was needed. But when we arrived at the local emergency room, I felt fairly normal again, so I spent ten minutes trying to persuade her that we should just go home rather than waste a few hours and hundreds of dollars on a pointless ER visit. Thankfully, Shona prevailed and I agreed to go in, my parting comment being, “I’m doing this for you, not me!” (Poor woman!)

Although the results of the heart tests were normal and the doctor felt 95 percent certain that all was fine, he said that it was best to get my blood enzymes checked at the downtown hospital just to be certain that there had been no heart attack. As I dithered, Shona decided, “Yes, we’re going.”

At the hospital, I happened to mention to the doctor that I had had a pain in my calf muscle since Sunday morning, which I breezily dismissed as “probably a muscle strain from tae kwon do.” He paused, turned back toward me, and narrowed his eyes: “Have you traveled recently?” I said that I had driven to Canada on Friday and arrived back in Grand Rapids on Monday morning.

The doctor looked concerned and decided to screen my blood, just to rule out a deep vein thrombosis (DVT) in my leg. An hour later (just after midnight), the results came back with a very high positive. For the first time, alarm bells began to ring in my mind.

Next, I was sent off for a CAT scan. Thirty minutes later, I heard the life-changing (and possibly life-ending) words, “I’m afraid you have multiple blood clots in both lungs [pulmonary emboli], probably having spun off from a clot in your leg.” I was told to lie flat on the bed and be as still as possible lest more clots break off from my leg and block my lungs. I was given a large dose of heparin and an intravenous drip of the same to stabilize the clots and start thinning my blood.

The next thirty-six hours were deeply solemnizing. All the blood clot anecdotes I’d heard over the years decided to flood my mind, probably partly provoked by the doctor’s parting words: “Don’t move from the bed; you have a life-threatening condition.” A sleepless blur of tests, tests, and more tests followed throughout the day, with fluctuating results: raising my hopes, then disappointing and worrying me.

Good to Be Afflicted?

In one of the rare moments of privacy I managed to grab in the maelstrom of that first night in the hospital, I picked up a daily devotional book beside my bed and turned to that day’s date to find meditations on the following verses:

These two themes—thankfulness to God for graciously delivering me and a desire to learn from this trauma—stayed with me for the next few days. The primary lesson was painfully clear: “God’s been hunting me down.”

That was my immediate and instinctive understanding of why the Lord had sent these blood clots into my leg and lungs. Three weeks and two complications later, I was more convinced than ever that God had been tracking me for many months, with loving arrow after loving arrow, until at last he’d brought me down to the dust.

Up until a year before, I’d lived a more or less healthy and vigorous life. At 6 feet 3 inches and 186 pounds, I was on the light side of average. Work and ministry, however, had pushed out regular daily exercise for a few years. Over the previous nine months, my medical file had bulged considerably with two other health issues, one of which had culminated in a major (and very painful) operation three months prior. I’d also had a frightfully near miss coming back from a ministry trip when my car spun 720 degrees on black ice, slipped off the highway, and ended up on an embankment. Did these providences give me pause?

Not for long. That’s why blood clots were required. God’s message to me, through my blood, was: “Stop!”

My life and ministry had been getting faster and faster for years. It was all good stuff: delivering lectures, preaching sermons, counseling, speaking at conferences, writing books, raising four kids (now five), and so on. But it had been at the expense of quiet and rest—physical, emotional, mental, social, and spiritual rest. I hadn’t neglected the means of grace—private devotions, family worship, and church attendance had all been steady and routine—but they were far too routine, with little or no joy in them. Life had become a restless, busy blur of ministry obligations and opportunities. The graces of sleep, exercise, peace, relaxation, a good diet, friendships, reflection, and fellowship with God had all been sacrificed for more “productive” activities. There had been little or no time to “Be still, and know that I am God” (Ps. 46:10).

But now, in the enforced stillness, I was hearing a loving and concerned God say, “My son, give me your heart” (Prov. 23:26). Not your sermons, not your lectures, not your blogs, not your books, not your meetings, but your heart. You!

It was not that I had been totally deaf to God’s previous appeals and interventions. I had heard, and fully intended to respond. My plan had been to push through a jam-packed March and April, then use a four-week space in my calendar to get into better physical shape, return to healthier sleeping patterns, secure more time for rest, draw near to God, and renew fading friendships. That was my plan. And it was about to work. I’d just finished the last in a long series of speaking engagements and had settled down in my easy chair to begin my planned soul revival. And thirty minutes later, I was in a hospital. The Planner had swept my plan off the table. 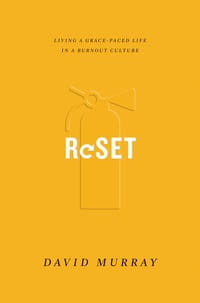 Content taken from Reset: Living a Grace-Paced Life in a Burnout Culture by David Murray, ©2017. Used by permission of Crossway, a publishing ministry of Good News Publishers, Wheaton, Il 60187, www.crossway.org.

David Murray (DMin, Reformation International Theological Seminary) is professor of Old Testament and practical theology at Puritan Reformed Theological Seminary and the pastor of Grand Rapids Free Reformed Church. He is also a counselor, a regular speaker at conferences, and the author of Jesus on Every Page.