How Can We Face Suffering and Death Like Jesus?

How Can We Face Suffering and Death Like Jesus?

Throughout life, wherever we are in the world, and whoever we are, we will all at some point face suffering of some kind. It may be physical, emotional, mental or spiritual and it can affect us and those we love. All of us will experience death, and many live in fear of facing their mortality.

In the Christian faith, we have a unique hope in the face of suffering and death that no other religion or worldview has. This hope is found in Jesus Christ.

Jesus came into our suffering world with all of its troubles and fears. He witnessed the suffering of others, faced immeasurable pain and suffering Himself, and ultimately experienced death by dying on a cross for us. Jesus is the hope we need when we encounter suffering and death because death was not the end for Jesus. He rose from the grave, and those who believe that He rose again can enjoy a relationship with Him.

With this glorious truth, let’s reflect on how we can face suffering and death like Jesus through a true story that Christians hold fast to in turbulent times.

Why is there suffering and death?

Suffering and death entered our world through the lies and deception of the enemy of God, Satan. He cunningly deceived Eve to disobey God by tempting her to doubt God’s goodness and making her long to be like God. She took a bite from the fruit of the forbidden tree in the Garden of Eden and then got her husband Adam to do the same.

Through listening to the lies of the enemy, the first humans brought forth destruction, opening up the way for suffering and death to enter the world as God had said it would if they disobeyed (Genesis 2:17).

… There Was Already a Plan…

Is there an ultimate purpose to suffering and death?

In the beginning, before the world was created, Jesus was with God the Father, and they were in perfect unity with the Holy Spirit. Through Him all things were made (John 1:3). He saw sin enter our world in the Garden of Eden, yet it did not surprise Him. There was a plan of redemption in place from the very beginning.

God said to the evil one who had deceived Eve, “...I will put enmity between you and the woman, and between your offspring and hers; he will crush your head, and you will strike his heel” (Genesis 3:15). This pointed towards the time when Jesus, the Son of God born of Mary, would defeat the enemy once and for all on the cross.

… for God to Save His People…

Why did Jesus have to suffer and die?

Jesus had to be the one to die because it was only His blood and sacrifice that could atone for the sins of a broken, sinful world. He was perfect, blameless and sinless. Only He could pay the high price which would cost His life.

Throughout the Old Testament, Israel had to bring something perfect, like a lamb without defect, to atone for their sin as they were imperfect. This was a continual offering made year after year. This foreshadowed Jesus as the perfect sacrifice offered one time for all the world’s sin. He went to the cross willingly because He is merciful and loving. His death reconciled us into a relationship with God which had previously been broken by our sin. 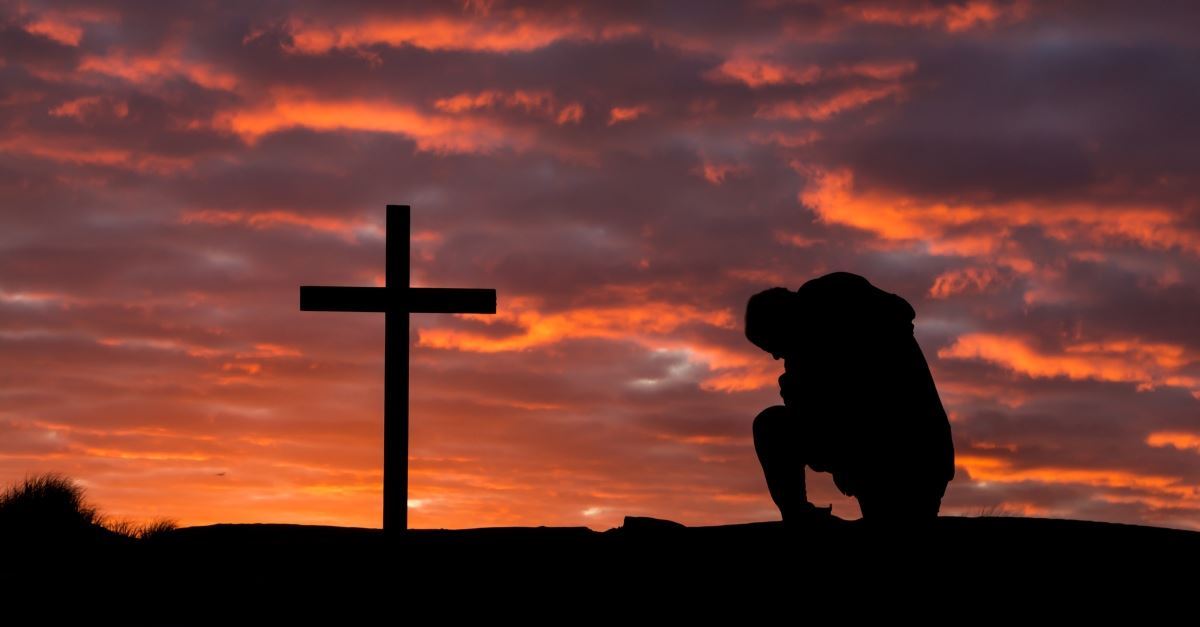 How does Jesus view the suffering and death of others?

God loves us all so much that He gave His Son to pay the price for our sin, and whoever believes in Him will not perish but have everlasting life (John 3:16). God knows what it is like to suffer and die because He experienced it Himself through the person of Jesus Christ who was fully God and fully man.

When Jesus walked the earth, He showed compassion to the sick and He wept over the death of His friend. He healed many and told them to repent from their sins. Sin is a sickness more deadly than anything that can befall us on earth. Jesus is the ultimate healer as He has conquered the power of sin and death on the cross. The cross is the mark of forgiveness which restores our relationship with the Lord when we turn to Him.

...by Giving His Life for Them…

How did Jesus face His own suffering and death?

Jesus knew His purpose was to suffer and to die. It was prophesied in Isaiah 53 that He would be “a man of suffering, and familiar with pain” (verse 3); He “took up our pain and bore our suffering” (verse 4); He was “pierced for our transgressions” “crushed for our iniquities (verse 5), “oppressed and afflicted” (verse 7) but remained silent. He was not violent nor had any deceit in Him (verse 9) and His life was “an offering for sin” (verse 10). Through the horrific suffering and death that Jesus endured on the cross, we have peace with God when we repent from sin and by His wounds we are healed (verse 5).

On the night He was betrayed in the Garden of Gethsemane, He spent time in prayer with His Father and was honest before Him. He asked for the suffering to be taken away, even though He knew what was to come. He remained obedient to the Father saying “not my will, but yours be done” (Luke 22:42). He did not retaliate towards those who scorned, beat and tortured Him – He asked His Father to forgive them, and because of the cross, we can experience that same forgiveness.

What Jesus suffered was much worse than anything that we have to go through because He had the weight of the world’s sin upon Him. Moreover, He experienced separation from the Father (Matthew 27:46), yet when we believe and trust Him, He promises that He will be with us always (Matthew 28:20) and that He will never leave us nor forsake us (Deuteronomy 31:6, 8; Psalm 94:14).

...and Now We Can Live Our Life for Him.

How can we face suffering and death like Jesus?

We have the amazing promise that God will always be with us and never leave us. There are countless promises in God’s Word that can help us to face suffering and death including eternal life where there will be no more tears or pain and the final return of Jesus to make all things right.

2. With the power of the Holy Spirit.

When Jesus left His disciples and ascended to heaven after His resurrection, He promised them that the Holy Spirit would come. He said, “But I will send you the Advocate—the Spirit of truth. He will come to you from the Father and will testify all about me” (John 15:26). By the power of the Holy Spirit, we have everything we need to face whatever comes our way.

Jesus intercedes for us before the Father and we can come to Him in prayer with our petitions and thanksgiving. He listens to us and we can have a conversation with the living God in all of life’s circumstances, including the most challenging and painful. It is often through suffering that we seek God more earnestly. However, let us come to Him when all is well and be accustomed to hearing His voice, so when trials come, we know that it is God we are tuned in to hear.

4. By following the example of Jesus.

Jesus says that His followers are to deny themselves, take up their cross and follow Him (Mark 8:34). It is a narrow path to be a Christian and the world will not receive believers – in the same way that they didn’t receive Jesus or His followers. If we are following Jesus, we should expect opposition and even hostility at times. In some parts of the world, there is the risk of imprisonment, torture and death for following Christ. The way of the cross is the way of suffering and we must be ready.

5. Trusting in Jesus and repenting of our own sin.

Jesus experienced suffering for us, knows our deepest pain and has been tempted in every way, just like we may be in our own suffering. We need to commit our life and entrust it into the nail-scarred hands of the Savior. Sometimes our sin is the cause of the suffering in our own life or the lives of those around us. We should ask for forgiveness from anyone that we have wronged and ask Jesus to forgive us for the times when we sin. We all sin, but Jesus is faithful and just to forgive our sins (1 John 1:9). We must commit our lives to God and we can be confident in Him, trusting in the One who knows all things and is working all things for good.

“To this you were called, because Christ suffered for you, leaving you an example, that you should follow in his steps. ‘He committed no sin, and no deceit was found in his mouth.’ When they hurled their insults at him, he did not retaliate; when he suffered, he made no threats. Instead, he entrusted himself to him who judges justly. ‘He himself bore our sins’ in his body on the cross, so that we might die to sins and live for righteousness; ‘by his wounds you have been healed.’ For ‘you were like sheep going astray,’ but now you have returned to the Shepherd and Overseer of your souls (1 Peter 2:21-25).

Ruth Clemence is a wife, mom, writer and Premier Digital award-winning blogger based in South West England. Read more at: ruthclemence.com and follow her on Twitter: @ruth_the_writer.