How to be Happy

How to be Happy

Deyon Stephens is the cofounder of Mercy Ships. She and her husband, Don, are tremendous people, leaders, and friends. Years ago someone told Deyon that she deserved some time away. In response Deyon said something I’ve never forgotten. “Actually, I don’t deserve anything,” she said. “I deserve death. Everything else is grace.”

What if we all lived as if we didn’t deserve anything good—ever? How different would the world be if we saw every good thing in life as a gift of God’s grace? Would we be more inclined to give grace to others? Would we hold on to things less tightly—our stuff, our expectations, even our reputations? Would we honor more, encourage more, love more, and even lavish more on others?

That sounds a lot like poverty of spirit, doesn’t it?

And what if this humility were to pave the way for a spirit of abundance, whereby we would freely lavish grace on one another? Would such a disposition free us from the ugliness of comparison, competition, and insecurity—the manifestations of fear? Would we be less afraid?

And fearing less, would we then create more room for grace—both for ourselves and for others—thereby having a greater capacity to both receive and give love?

And having a greater capacity for love, would we find ourselves happier?

Happiness is not a state that is earned. It is a response, usually automatic, to undeserved grace. And underserved grace reveals something salient about God: his nature. God gives grace because he loves. When we give grace, we love too.

When Jesus lifted up the poor, meek, merciful, thirsty, and persecuted as poster children for blessing, he wasn’t saying that we should seek poverty, sadness, or persecution in order to curry favor with him. No, he was inviting us into a way of life in which grace, favor, blessing, and love are lavished upon the kind of people who don’t lay claim to them, who know in every fiber of their being that they cannot earn those things. For such folk, who know from the bottom of their souls to the last neuron in their brains that they do not deserve grace, their only response can be joy.

The life of authentic faith can begin only with grace—vulgar grace, the kind that offends before it’s welcomed. All other versions of faith will topple over or fade away, like the house built on sand that Jesus talked about. Self-righteousness, self-effort, and even self-actualization are all beds of sand. The only unequivocal foundation of faith is grace.

Unfortunately, we often give lip service to grace but continue to live by the pecking order of comparison and entitlement. How can we really live differently?

First, let go of any entitlements. I realize in a world where we constantly talk about human rights, the idea of letting go of what we may feel we’re entitled to is counterintuitive, even countercultural. Someone said, “Never seek justice for yourself, but never cease to give it.” Relinquishing your claims, your rights, your attachments unleashes a deluge of grace that will set you apart, strikingly apart, so much so that people will ask how you got that way.

Second, accept that you are accepted. This is the hardest thing you’ll ever do. To fully accept that you are unconditionally loved is a lifelong pursuit. This is the central truth of the universe, the idea behind creation, the supreme motive in the heart of God, and the reason angels sing and dance. To the degree you can comprehend this truth is the degree to which you can live free from fear.

Third, lavish grace on others. Choosing to give grace is easy to talk about. We do it all the time. Doing so in real life is another thing altogether. How different the world would be if we didn’t compare, didn’t take offense, didn’t gossip about one another, and instead found ways to tangibly encourage and celebrate one another and give the benefit of the doubt during tough times.

Some of the best stories explore the intoxicating nature of grace. Victor Hugo’s Les Misérables pits law against grace in the characters of Inspector Javert and Jean Valjean. Peter Shaffer’s Amadeus explores the astounding musical talents of Mozart compared to his graceless contemporary Antonio Salieri. In both of these stories, one character must die because the two cannot coexist. Why? Because they are diametrically opposed to each other. Grace and judgment cannot occupy the same space. One must give way to the other. In Les Misérables the vengeful Javert takes his life. Valjean triumphs, and his spirit lives on. In Amadeus, Salieri survives Mozart, though the former all but loses his mind while Mozart’s music still inspires.

If not welcomed, grace doesn’t merely offend. It frustrates, angers, infuriates, and finally debilitates the rule keepers. In his book All is Grace, Brennan Manning called this grace vulgar, because it “works without asking anything of us. It’s not cheap. It’s free, and as such will always be a banana peel for the orthodox foot and a fairy tale for the grown-up sensibility.” Thankfully, as Manning further noted, “Grace is sufficient even though we huff and puff with all our might to try to find something or someone it cannot cover. Grace is enough. He is enough. Jesus is enough.” 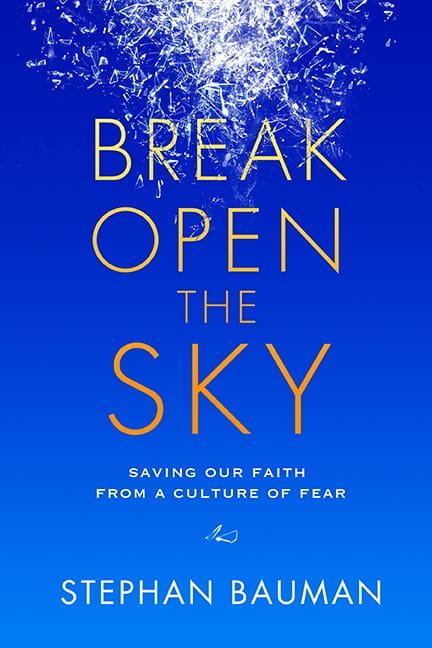 Excerpted from BREAK OPEN THE SKY: SAVING OUR FAITH FROM A CULTURE OF FEAR Copyright © 2017 by Stephan Bauman. Published by Multnomah, an imprint of the Crown Publishing Group, a division of Penguin Random House LLC.

Stephan Bauman lives to see people everywhere rise to the biblical call of love and justice. Stephan transitioned from a career in the Fortune 100 sector to Africa where he directed relief and development programs for nearly a decade before serving as President and CEO of World Relief, an international relief and development organization serving more five million vulnerable people each year. Today Stephan is the Executive Director of a philanthropic Foundation serving the least resourced and accessible places of the world. Stephan, Belinda, and their two sons, Joshua and Caleb, live near Grand Rapids, Michigan, and enjoy the woods, the arts and late night conversations with friends.