How to Keep “Waiting Time” from Being “Wasted Time”

How to Keep “Waiting Time” from Being “Wasted Time”

“In life, God will always work sovereignly, strangely, and slowly,” pastor and author Steve Farrar says. “He will take time, but He will not waste time.”

In this culture of ours, we have become accustomed to things happening quickly. Fast food. Online check-ins. Call ahead seating. One-hour photo processing. And while these cultural conveniences are minor in the grand scheme of things, they certainly haven’t helped us learn how to wait on the big things.

But those who desire to experience an extraordinary life will learn the value of waiting on God’s timing.

Waiting time does not have to be wasted time. God often calls on us to take a time-out, because waiting has always been a part of God’s plan for those He uses in a powerful way. God’s most extraordinary servants have had to learn that significance is developed not on the playground of activity, but during the quiet recesses.

Elijah was one of these extraordinary servants. After Elijah’s initial confrontation with Ahab, God told the prophet to leave Samaria and go to the wilderness. “The word of the Lord came to him, saying, ‘Go away from here and turn eastward, and hide yourself by the brook Cherith, which is east of the Jordan’” (1 Kings 17:2–3).

Why would God send the one man in all of Israel willing to stand up to the godlessness that had gripped the nation to sit beside a small creek in the desert? I do not think it was for Elijah’s protection. God was more than capable of ensuring that no harm came to His prophet without hiding him in the desert.

Instead, God reassigned Elijah to the wilderness for two other reasons. First, Elijah’s withdrawal from the national scene was itself a judgment against the nation of Israel. Additionally, God would also use this parenthesis in Elijah’s ministry to prepare him for a great future mission. By isolating him in that uncomfortable place, God was teaching Elijah to trust Him in ways he had never trusted before. This deepening of Elijah’s faith was not optional, but essential for the future assignment God had in mind for His prophet.

Perhaps you are in a similar place in your life in which you feel cut off from others and even from God. Your Cherith may be the result of:

Although your present circumstances make you feel cut off from the life you dreamed of, God is using this experience to cut down your reliance on anything or anyone other than Him so you might learn to trust God completely. Learning to depend upon God fully is vital for anyone who wants to experience an extraordinary life.

During Elijah’s boot camp experience, God taught his servant three vital skills necessary for spiritual success—skills we must develop as well if we want to experience a significant life. These three skills are what we need to keep our “waiting time” from becoming “wasted time.”

The path God calls us to walk is one of faith and obedience, not sight and independence. Paul encouraged the Corinthian believers with this truth: “we walk by faith, not by sight” (2 Cor. 5:7).

God is not in the habit of revealing His entire plan for our life all at once. If He did, we would race forward without ever feeling the need to slow down, listen to His voice, and wait on His direction. While God does not unravel His entire blueprint for our lives, He can always be trusted to reveal to us the next thing we need to do. Every Christian who wants to experience an extraordinary life needs to answer the question, “What is the next thing God wants me to do?”

For Elijah, God’s answer came through a simple command:

“Go away from here and turn eastward, and hide yourself by the brook Cherith, which is east of the Jordan” (1 Kings 17:2–3). God did not reveal to Elijah what every day would be like at Cherith, the next phase of his training at Zarephath, or the daunting contest that awaited him on Mount Carmel. The Lord simply revealed to His servant what he was to do next.

What was true in Elijah’s life is true in yours. Usually, God only reveals as much of His plan for your life as you need today. Do not worry about what He has in store for you in the next year, the next month, or even the next day. “Tomorrow will care for itself,” Jesus said. “Each day has enough trouble of its own” (Matt. 6:34).

When God recalled Elijah from the palace and redeployed him to the wilderness, he did not balk. Elijah did not dig in his heels and remind the Lord that He was the one who had dispatched him to Samaria on this risky mission in the first place. Nor did Elijah protest the unreasonableness of going into hiding when his influence was making such a difference in the culture. Instead, when the Lord told Elijah to pack his backpack for a camping trip, he obeyed instantly: “So he went and did according to the word of the Lord, for he went and lived by the brook Cherith, which is east of the Jordan” (1 Kings 17:5).

I think about the honest confession of my friend and mentor Dr. Howard Hendricks, who said, “The Lord and I have a running argument. I constantly attempt to impress him with how much I know. He constantly seeks to impress me with how little I have obeyed.”7 If a godly leader like Howard Hendricks struggled with obedience, then why should you or I be surprised by our difficulty in obeying God immediately and completely?

However, Elijah not only preached God’s Word to others but also practiced God’s Word himself. When God spoke, Elijah listened and obeyed. God’s prophet in hiding was a living illustration of what the New Testament writer James had in mind when he exhorted Christians to be “doers of the word, and not merely hearers who delude themselves” (James 1:22).

God promised that He would take care of Elijah at Cherith. Though the means of God’s provision seemed unusual, Elijah trusted God without reservation. The Lord said to Elijah, “It shall be that you will drink of the brook, and I have commanded the ravens to provide for you there” (1 Kings 17:4).

After Elijah found a spot to set up camp, the Lord dispatched ravens to feed His hungry prophet. Twice a day, morning and evening, those big black birds brought Elijah bread and meat, and he drank from the clear, clean water of Cherith (v. 6).

Every day Elijah experienced the truth one of Israel’s kings had written years earlier:

Trust in the Lord with all your heart

And do not lean on your own understanding.

In all your ways acknowledge Him,

If Elijah had chosen to “lean on his own understanding,” then he would not have retreated to Cherith after his initial successful encounter with Ahab. Instead, he would have embarked on a speaking tour throughout Israel! He would have called the people back to faithfulness, cajoling the nation to repent from its idolatry. He probably would have immediately challenged the prophets of Baal to a showdown on Mount Carmel. After all, Elijah was a hot commodity in Israel. Everyone was talking about this up-and-coming unknown prophet who had the courage to confront the most powerful person in the nation.

But that was the very thing God did not want Elijah to do—not at that time, anyway. God wanted His prophet to regroup, rethink, and renew his soul. And in Elijah’s process of waiting for his next assignment and trusting the Lord to provide for his needs, God would refine and strengthen his faith.

Cherith seems like an odd place for a successful prophet to wait, but it was exactly the place where God wanted Elijah.

What about you? Are you where God wants you to be right now—even if it is in the waiting place? If so, He will provide. Not necessarily all at once, but day by day. Learn the lesson Elijah learned: trust the Giver of gifts more than the gifts themselves. Your waiting time will not be wasted. 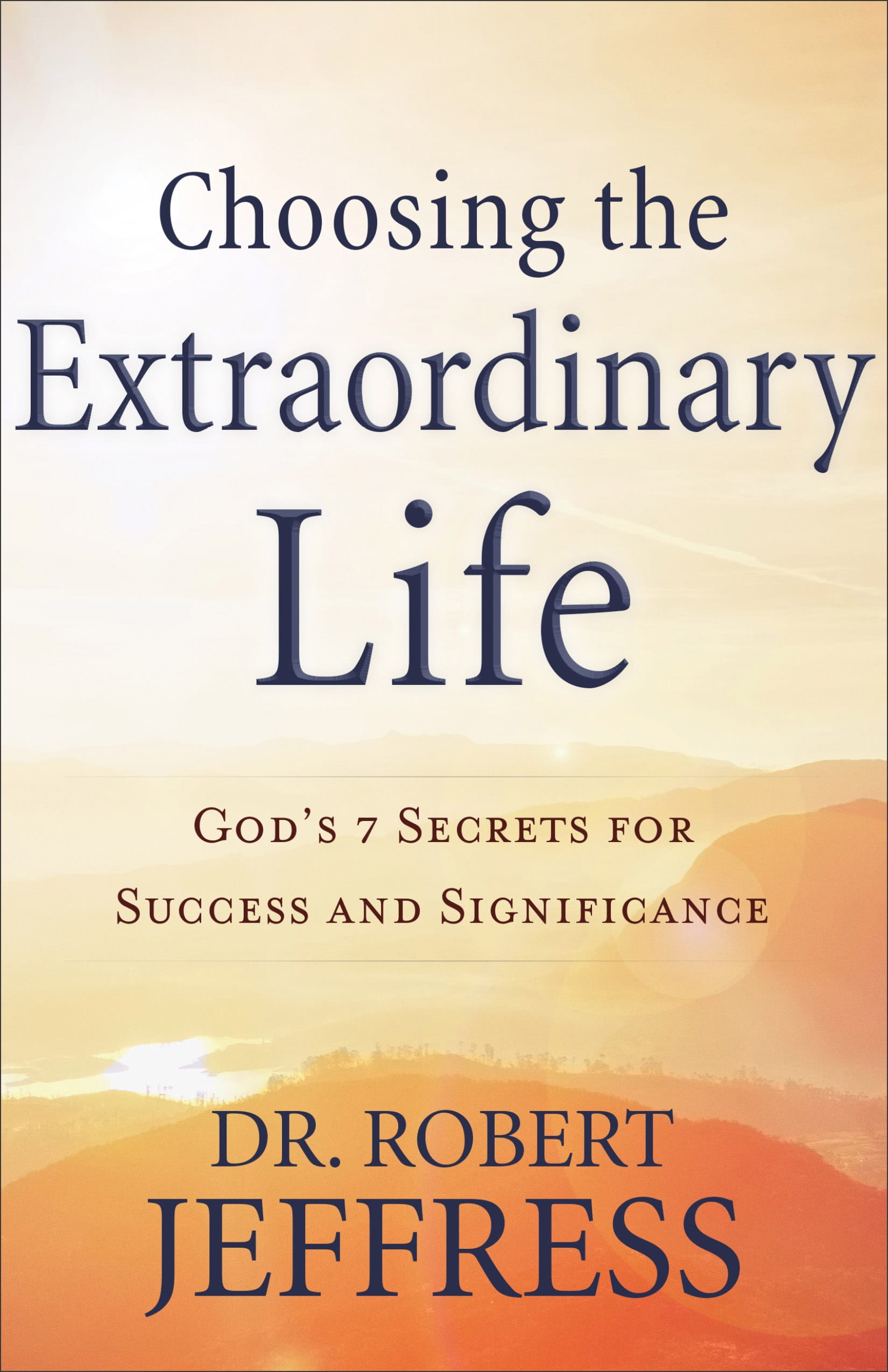 Dr. Robert Jeffress is senior pastor of the 13,000-member First Baptist Church in Dallas, Texas, a Fox News contributor, and a member of the executive committee of the White House Faith Initiative. He is the author of the new book Choosing the Extraordinary Life, available now. Jeffress’ daily radio program, Pathway to Victory, is heard on more than 930 stations nationwide, and his weekly television program is seen on thousands of cable systems and stations in the US and in nearly 200 countries around the world.