Is the Energy Connecting Us ‘Karma’ or God?

Is the Energy Connecting Us ‘Karma’ or God?

A lot of non-Christians pray to the universe; to some kind of energy. They talk about “karma,” an ancient concept associated with many religions. Christians need to inform themselves about scriptural responses to “karma” and “energy” to answer questions or reply to assertions made by unbelievers that this universal energy and God are the same.

Karma: Does it Mean Anything?

Karma is associated with the Hindu and Buddhist idea of reincarnation, although humanists and even some of my so-called Christian friends throw the term around thoughtlessly all the time. You’ll recognize “karma” as a term addressing the cosmic balance between good and bad behaviors.

In terms of karmic economy, acting kindly much of the time puts one’s moral balance in the black; too many bad choices lead to a deficit. The “karmic sum” of your life determines how high or low in society or the food chain you will land in the next life.

Karma is a Sanskrit word for “action” and refers to “cause and effect.” Synonyms include “fate” and “destiny.” (Ibid.) When someone behaves rudely to customers in the grocery store and then is shamed on social media, that’s karma. When the nicest person you know wins the lottery, that’s karma. People get what they deserve; what’s coming to them.

Karma is associated with behaviors, not with thoughts.

“Energy, in physics” is “the capacity for doing work.”

“All forms of energy are associated with motion.”

While “energy can be converted from one form to another,” energy cannot be created or destroyed. It is potential, kinetic, mechanical, etc. (Ibid.) Energy is not inherently good or bad. It does not promote kindness or depravity. If there is energy related to karma that connects people it’s the action of helping.

The Merriam-Webster dictionary online describes a Chakra as “any of several points of physical or spiritual energy in the human body according to yoga philosophy.” Apparently, there are “more than 88,000 points” in the human body.

One can supposedly activate these points using crystals such as amethyst, chrysoprase, and rose quartz. These energy centers control love, sensuality, inner growth, prosperity, and more. Skeptics say there’s no harm in using the stones. They don’t lead to addiction or poison anybody. If someone feels better after laying crystals on special energy points, that’s a “win.”

The implication is that one’s moral choices could be affected by energy centers in the body.

According to these occult physiological practices, opening energy points enables good behavior while blockages lead to bad choices. Furthermore, this way of seeing the world implies that the best of ourselves comes from within; we can “be good” in our own strength by releasing our inner power.

Also implicit is that outward actions are important, but not thoughts.

It’s fine to think “I really wanted to punch that guy.” A like-minded friend says “well done for not putting that negative energy out into the world.” Self-control and love for neighbors aren’t necessarily possible among people who ignore the health of their chakras. According to this belief, you have to look inward to be able to look outward. 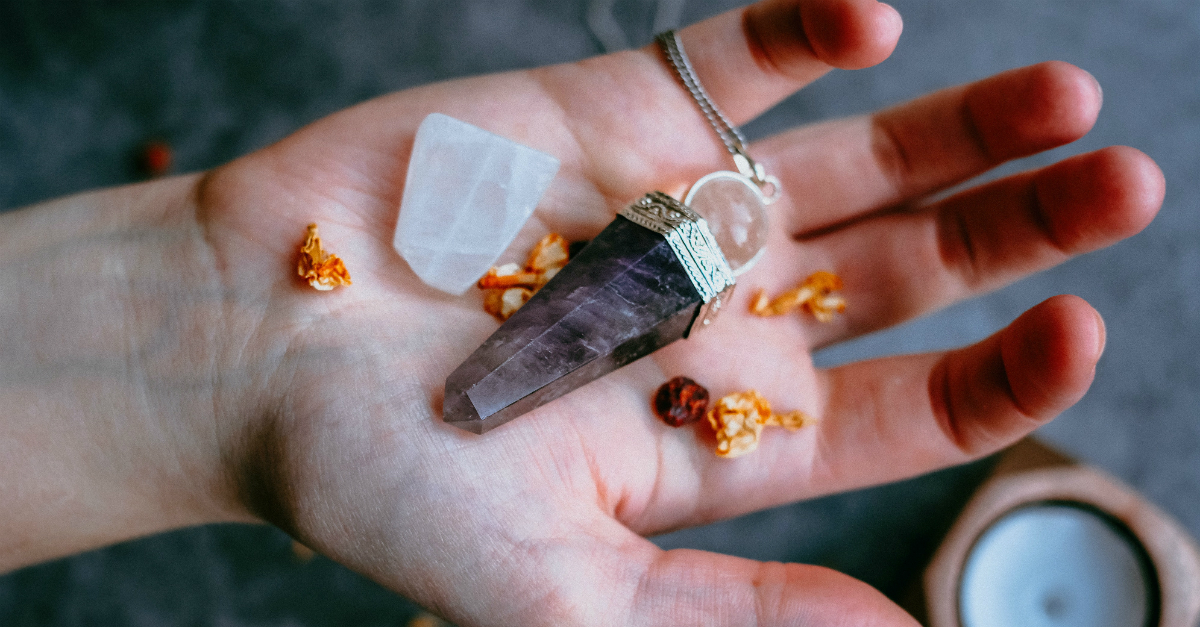 What Does the Bible Say about Karma?

Do we get what we deserve?

We do not get what we deserve. Is it karma when a young mother is diagnosed with cancer, even though she is devoted to her kids and volunteers at a women’s shelter? When a corporate executive gives himself a raise, buys a mansion in the Bahamas, and lays off 50 employees...how is he getting what he deserves? If karma makes sense, why did Jesus (of all people) have to die, and in such a way? Even Hindus, Buddhists, and Muslims agree that Jesus was a good man.

No one is righteous (except Christ), but believers are saved from eternal justice; we are covered in the blood of the lamb. We are invited to repent of our sins and receive forgiveness because the only sinless person who did not deserve death took death upon Himself for our sake.

What we think is important too. Christians receive the free gift of salvation by grace through Christ, not by doing anything except to believe and repent. After we do this, Christ-emulating thoughts and actions frequently follow. Paul encouraged us in Philippians 4 to meditate on good and worthy things. These thoughts must lead us to Christ because only He is good and worthy.

Yes, love is a verb, but loving action comes out of a place of forgiveness. Actively loving others does not secure forgiveness and a person is not saved by choosing not to act on sinful thoughts. Jesus said “anyone who is angry with a brother or sister will be subject to judgment” because he has committed murder in his heart. (Matthew 5:22, Matthew 5:28)

For karma to connect people, they have to be freed from the constant need to meet their moral quota. By karmic standards, one can never know when an amount of “good” is enough. Who is the moral bank manager? Moreover, if the debt seems too heavy to redress with acts of kindness, why not declare total bankruptcy?

What is the point of trying to be good if one sees a huge debt and thinks “nothing I do will ever make up for this evil. I might as well be bad?"

Only God's grace is sufficient to cover all sin for all people for all time.

“The law of the Spirit of life has set you free in Christ Jesus from the law of sin and death.” (Romans 8:2)

Grace touches us personally, but also leads us to relationship and connection. Scripture tells us to work as a body of right-thinking believers. “If one member suffers, all suffer together; if one member is honored, all rejoice together.” (1 Corinthians 12:26)

Bring the Gospel to the world; increase the Kingdom of God, but not by works or in our own strength. For Christ and in Christ we are willing and able to do good works out of love for Him, confident in the promise that He is sanctifying us and forgives us when we mess up.

There is no ledger. God doesn’t keep one and neither should we, for ourselves or others.

“Judging others makes us blind, whereas love is illuminating. By judging others we blind ourselves to our own evil and to the grace which others are just as entitled to as we are.”

The Bible, Crystals, and Energy

Mark 5:34: “Daughter, your faith has made you well; go in peace, and be healed of your disease.” Repentance and forgiveness heal our relationship with God, enabling us to engage in community more fully.

Crystals are said to open energy points in the body so that a person can love and can have peace, but the fruit of the Spirit which is in every believer includes peace, patience, gentleness, kindness, love, self-control. They aren’t a product of our actions, but are in us through Christ by the Spirit. Jesus used physical healing to point to ultimate healing: forgiveness bought on the cross in a single act of love. The relationship between God and His people is restored.

Where is the sentient force behind universal energy, making choices for the good of his or her people and providing direction? Once we start talking about purpose, there has to be a person involved, not merely physics. There is energy all over the place all the time, but it is impersonal and amoral. It doesn’t supply direction or comfort or relationship.

Christians are apt to believe in grace, and true believers want to be more like Christ by living out their delight in the Lord, Christians expend a lot of energy being personal emissaries of a living God. Like energy, He is not created or destroyed. But unlike karmic energy, He cares about us personally.

Candice Lucey loves Christ and writing about His promises brings her much pleasure. She lives in the mountains of BC, Canada with her family.