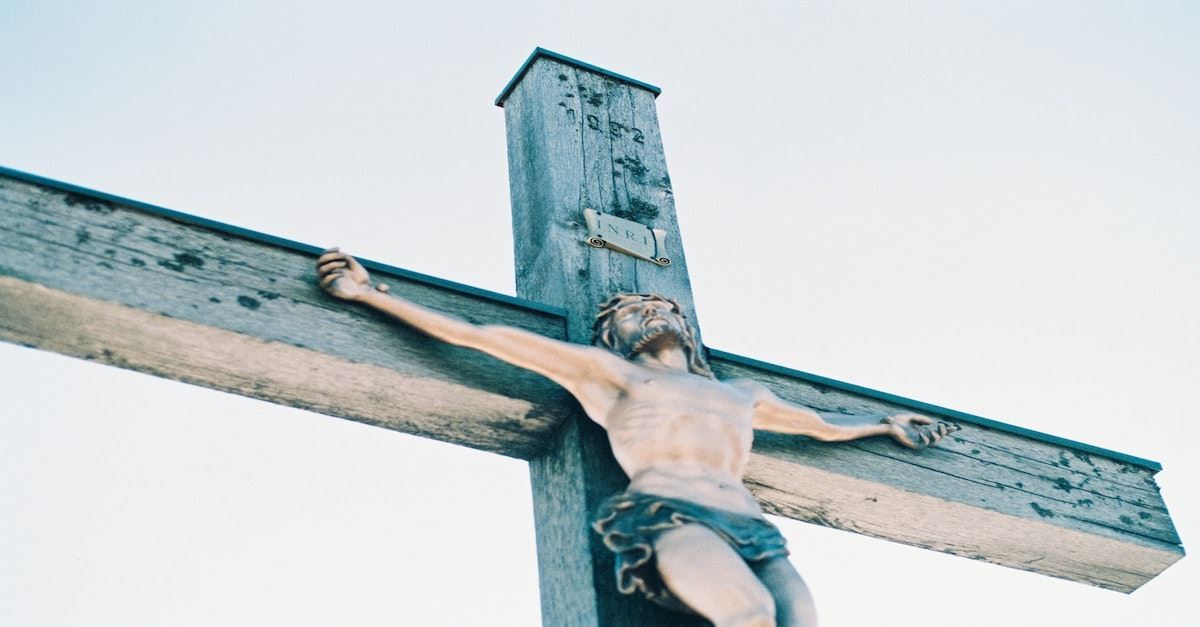 When Jesus therefore had received the vinegar,
he said, It is finished:
and he bowed his head, and gave up the ghost.
John 19:30

The Cross of Jesus Christ is the most precious emblem to those of us who call Jesus the Lord of our lives. We love the Cross and cherish it because of the price that was paid 2,000 years ago when Jesus died for our sins. The Cross represents our forgiveness, our freedom, our redemption. We love it so much that we adorn our churches and homes with crosses, and women even wear them around their necks. But when the pure Lamb of God hung on that Cross we deem so precious - naked, beaten, and bleeding profusely before a watching world - it was a ghastly sight. Indeed, it was the most horrendous moment in human history.

No death was more scandalous than death on a cross. Such a death was dreadful and hideous, designed to discredit and tarnish the memory of the one dying. Blood drenched Jesus’ torso, pouring from His head and brow, running like rivers from the deeply torn flesh in His hands and feet. The effect of the scourging that Jesus had received in Pilate’s palace began to take its toll as His body swelled up and became horribly discolored. His eyes were matted with the blood that poured from the wounds in His brow - wounds caused by the crown of thorns that bore down into His skull as the soldiers pushed it hard upon His head. The whole scene was ugly, unsightly, repulsive, sickening, vile, foul, and revolting.

In the Jewish world, nakedness was a particularly profound shame. Because the body was made in the image of God, the Jewish people believed it was a great dishonor to display a naked body. So as if Jesus’ suffering had not already been enough, He experienced the ultimate act of degradation and shame as He hung on the Cross, naked and exposed before all those who watched the unfolding drama.

Approximately 700 years earlier, the prophet Isaiah correctly prophesied Jesus’ appearance on the Cross. In Isaiah 52:14, the prophet wrote with a sense of horror, “As many were astonished at thee; his visage was so marred more than any man, and his form more than the sons of men.” In Isaiah 53:2, Isaiah continued, “…He hath no form nor comeliness; and when we shall see him, there is no beauty that we should desire him.”

Jesus had been put through horrendous forms of torture and had been atrociously abused and battered. As a result, “…His face and His whole appearance were marred more than any man’s and His form beyond that of the sons of men…” (Isaiah 52:14 AMP). In the New International Version, this verse is translated to say, “…His appearance was so disfigured beyond that of any human being and his form marred beyond human likeness.…”

In Isaiah 53:3-5, Isaiah continued to vividly describe Jesus’ sacrifice. He wrote, “He is despised and rejected of men; a man of sorrows, and acquainted with grief: and we hid as it were our faces from him; he was despised, and we esteemed him not. Surely he hath borne our griefs, and carried our sorrows: yet we did esteem him stricken, smitten of God, and afflicted. But he was wounded for our transgressions, he was bruised for our iniquities: the chastisement of our peace was upon him; and with his stripes we are healed.”

When Jesus died on that Cross:

As Jesus approached death, the Bible tells us, “They gave him vinegar to drink mingled with gall….” (Matthew 27:34). As we saw in Chapter 25, a man who was to be executed could request a narcotic, mingled together with wine, which would help alleviate the pain of his execution. As noted before, the word “gall” in this verse is a special Greek word that refers to a painkiller that was mingled together with wine. John 19:30 tells us that “When Jesus therefore had received the vinegar, he said, It is finished: and he bowed his head, and gave up the ghost.”

Four Translations & Meanings of "It is Finished"

“It is finished” is a translation of the Greek word tetelestai, the perfect indicative passive tense of the word telos, which means to end; to bring to completion; to bring to a conclusion; to complete; to accomplish; to fulfill; or to finish. One scholar notes that anything that has reached telos has arrived at completion, maturity, or perfection. There were many nuances to this word, but four or them have great significance with this defining moment of Christ’s sacrifice.

First, this was Jesus’ exclamation that He had finished the work the Father had sent Him to do.

The work having been fully completed, Jesus bowed His head and died. One writer has noted that when a servant was sent on a mission and then later returned to his master, he would say, “Telelestai,” meaning, “I have done exactly what you requested” or “The mission is now accomplished.”

In that moment when Jesus cried out, he was exclaiming to the entire universe that He had faithfully fulfilled the Father’s will and that the mission was now accomplished. No wonder Jesus shouted ¾ for this was the greatest victory in the history of the human race! He had been faithful to His assignment even in the face of unfathomable challenges. But now the fight was over, and Jesus could cry out to the Father, “I have done exactly what You asked Me to do!” or “The mission is accomplished!”

Second, the word tetelestai was the equivalent of the Hebrew word spoken by the high priest when he presented a sacrificial lamb without spot or blemish.

Annually the high priest entered the Holy of Holies, where he poured the blood of that sacrificial spotless lamb on the mercy seat of the Ark of the Covenant. The moment that blood touched the mercy seat, atonement was made for the people’s sins for one more year ¾ when once again, the high priest would enter beyond the veil of that sacred room to offer blood. This was done year after year to obtain the annual, temporary forgiveness of sin.

But when Jesus hung on the Cross, He was both Lamb and High Priest. In that holy moment as our Great High Priest, Jesus offered His own blood for the permanent removal of sin. He offered up the perfect sacrifice of which every Mosaic sacrifice was a type and symbol - and in that instant, there remained no more need of offering for sin.

Jesus entered into the Holy Place and offered His own blood - a sacrifice so complete that God never again required the blood of lambs for forgiveness. As Hebrews 9:12 says, “Neither by the blood of goats and calves, but by his own blood he entered in once into the holy place, having obtained eternal redemption for us.”

Thus, when Jesus said, “It is finished!” He was declaring the end of sacrifice, because the ultimate Sacrifice had finally been made! Atonement was completed, perfected, and fully accomplished. It was done once and for all - finished forever!

Third, in a secular sense, the word tetelestai was used in the business world to signify the full payment of a debt.

When a debt had been fully paid off, the parchment on which the debt was recorded was stamped with tetelestai, which meant the debt had been paid in full. This means that once a person calls Jesus the Lord of His life and personally accepts His sacrifice, no debt of sin exists for that person any longer. The debt is wiped out because Jesus paid the price for sin that no sinner could ever pay.

Jesus took our place. He paid the debt of sin we owed. And when we by faith repent and receive Him as Lord, we are set free! This is why Paul wrote, “In whom we have redemption through his blood, even the forgiveness of sins” (Colossians 1:14)

When Jesus uttered those words, “It is finished!” it was His declaration that the debt was fully satisfied, fulfilled, and complete. His blood utterly and completely cleansed us forever. It was far-reaching and all-embracing for all of us who put our faith in Him.

Fourth, in classical Greek times, the word tetelestai depicted a turning point when one period ended and another new period began.

When Jesus exclaimed, “It is finished!” it was indeed a turning point in the entire history of mankind, for at that moment the Old Testament came to an end - finished and closed - and the New Testament began. The Cross was “the Great Divide” in human history. When Jesus cried out, “It is finished!” He was shouting that the Old Covenant had ended and the New Covenant had begun!

In that divine moment when Jesus cried, “It is finished,” all the Old Testament prophecies about Jesus’ earthly ministry were fulfilled. The justice of God had been fully met and satisfied by the Lamb of God. At that moment, the sacrifices of the Old Testament permanently ceased, for the perfect Sacrifice had laid down His life for the salvation of mankind. Jesus’ mission was accomplished. Thus, He could cry out that His task was complete!

Never forget that because Jesus was willing to offer His own blood for the full payment of our sinful debt, we are forgiven and utterly debt-free. “PAID IN FULL” has been stamped on our past sinful record because Jesus paid the price for our redemption with His own blood.

Isaiah said, “Surely he hath borne our griefs, and carried our sorrows: yet we did esteem him stricken, smitten of God, and afflicted. But he was wounded for our transgressions, he was bruised for our iniquities: the chastisement of our peace was upon him; and with his stripes we are healed” (Isaiah 53:4,5). So remember:

Think of the price Jesus paid and what His death accomplished for you. Doesn’t it make you want to stop for a few minutes to thank Him for what He has done for you? Where would you be today if Jesus had not died on the Cross for you? Why don’t you take a little time right now to express your heartfelt thanksgiving to Jesus for paying the debt you never could have paid!

Excerpted from: Paid In Full: An In-Depth Look at the Defining Moment of Christ’s Passion, by Rick Renner. Used with permission.

Rick Renner is a highly respected leader, teacher, and author within the global Christian community, best known for his ministry in the former Soviet Union and his interpretation of the Greek New Testament. Rick attended the University of Oklahoma, where he studied Classical Greek, Journalism, and Mass Communication. In the years that followed, he continued his extensive study of the Greek New Testament, later earning a Doctor of Philosophy in Ministry. His vast knowledge of the Greek is evidenced in Sparkling Gems of the Greek, which has sold over 100,000 copies. Rick is founder and pastor of the largest and fastest growing church in Russia, The Moscow Good News Church, the Good News Association of Churches and Ministries for Russia, Latvia, and Ukraine assisting approx. 700 churches throughout and has launched “It’s Possible!”, a humanitarian foundation that currently distributes vitamins monthly to thousands of pensioners in Moscow and also bringing assistance to their prison ministry, orphanages, and feeding the hungry. He is the author of more than ten books including the best-sellers, Dressed to Kill (400,000 copies sold), Ten Guidelines to Help You Achieve Your Long-Awaited Promotion, Point of No Return, Insights on Successful Leadership and more. He has been a guest on Joyce Meyer’s “Enjoying Everyday Life”, “Life Today” with James & Betty Robison, Trinity Broadcasting Networks, “Praise the Lord” program and more. His daily television broadcast, “Good News with Rick Renner” can be seen by a potential 100 million viewers across Russia. Rick and his wife, Denise, make their home in Russia along with their three sons: Paul, Philip and Joel, who are all actively involved in the ministry.